Israeli police violently disperse a Palestinian protest against Israeli actions in Jerusalem and the Gaza Strip, in the northern coastal city of Haifa on May 11, 2021. Photo credit: © Mati Milstein/NurPhoto via ZUMA Press
International

How Israeli Cops Triggered a War and Kept Netanyahu in Power

Last month, Benjamin Netanyahu was on his way out of power in Israel — and perhaps, on his way to jail — until violence and provocations from Israeli police, which are under the control of a Netanyahu loyalist, helped trigger a war.

The role of Israeli police in the buildup to the 11-day war between the Israeli Defense Forces and militants in the Gaza Strip has largely escaped scrutiny in most of the West. So has the fact that the violence followed a contested March election and foiled efforts by Netanyahu’s opponents to form a coalition government and remove him from office.

Provocative actions at sensitive sites continued even during US Secretary of State Antony Blinken’s visit to Israel this week. There was no sign that Blinken discussed law enforcement behavior when he met with Netanyahu on Tuesday. In the pair’s public remarks to the press, there was no mention of what may have set off the conflict. And Israeli journalists given access to Blinken deliberately avoided domestic politics, reducing discussion of this most recent war’s causes to the usual “time immemorial” narrative.

However, Israeli politicians and observers have suggested — almost always obliquely, but less and less so — that law enforcement behaved as if they were deliberately provoking Hamas into starting a war. That poses unanswered questions of what direction Israeli police received from Netanyahu or from Amir Ohana, a Netanyahu loyalist who serves as minister of public security and is the top police official in the country, or from anyone else during a period of escalating tensions.

Regardless of whether Netanyahu or a loyalist commanded or encouraged police to provoke a conflict, the provocations happened. And one clear winner has emerged: Netanyahu, who is poised to benefit from this crisis as Israeli law enforcement stages mass arrests of Palestinian civilians while continuing  to raid mosques and spray crowds and homes with pepper spray and “skunk water,” even after the May 23 cease-fire. Recent opinion polling suggests the one issue uniting conservative Israeli voters is toppling Hamas.

In the view of Netanyahu’s main rival for power, none of this — including the war — would have happened without the political instability, and without Netanyahu’s obvious desperation to stay in office.

“If we had a government, security considerations would not be mixed with political considerations,” Yair Lapid posted on Facebook. Lapid is the opposition leader who had announced he was close to forming a government — one that, for the first time, would have members of an Arab party as part of a ruling coalition. This announcement came just a few days before police raids on the Al-Aqsa Mosque in the Temple Mount complex provoked the first Hamas rocket attacks, upsetting Lapid’s plan. “No one would ask themselves why the fire always breaks out just when it’s most convenient for the prime minister,” he wrote. 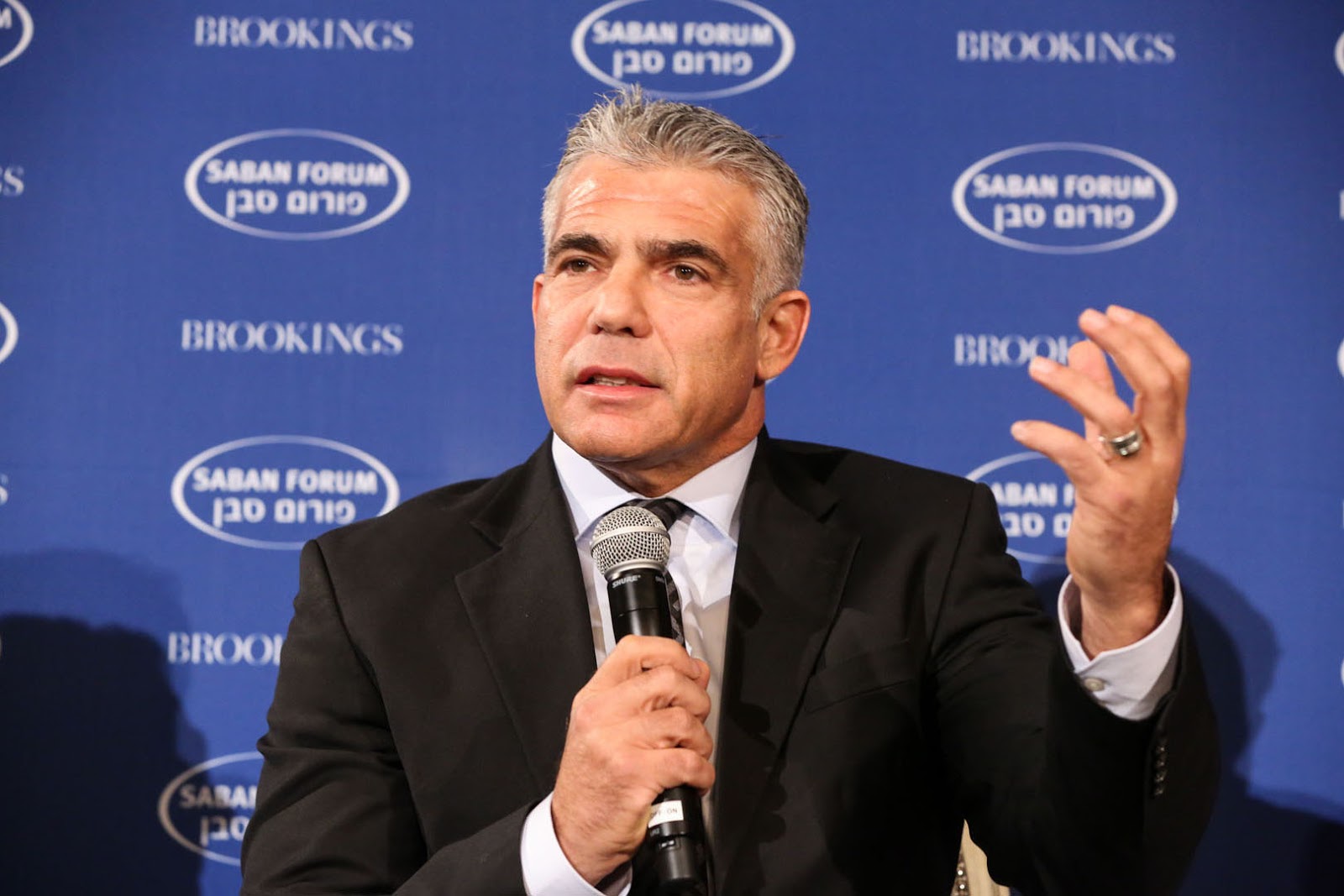 On April 13, the first day of the Muslim holy month of Ramadan, police officers marched into the Al-Aqsa Mosque. The police broke locks in order to cut the cables powering the loudspeakers that broadcast the call to prayer from the mosque’s minarets — necessary, police officials said, so that new recruits in the Israel Defense Forces could have their own prayer service at the Temple Mount’s Western Wall.

The significance of this should not be understated. It was “the first time since 1967 that Israeli occupiers have sabotaged locks in order to enter the minarets and physically cut off electricity to the loudspeakers,” according to Wasfi Kailani, the executive director of the Hashemite Fund for the Restoration of Al-Aqsa Mosque.

The last time Israeli occupiers broke locks to enter the minarets was over 50 years ago, during the Six Day War when the Israeli military “liberated” East Jerusalem and the West Bank from Jordanian control, as the IDF puts it.

Over the next few weeks, as mob violence broke out in cities — and as Israeli settlers pressed their claims on homes owned and occupied by Palestinians in Sheikh Jarrah, a disputed neighborhood in East Jerusalem and one of the flashpoints that led to the 11-day war — Israeli police would return again and again to Al-Aqsa, each time raising tensions.

On May 7, Israeli police raided the mosque and fired tear gas and stun grenades at worshippers-cum-protesters inside the mosque’s prayer hall, injuring hundreds and prompting outrage across the Muslim world.

“Without a doubt, it was clear to us that the Israeli police wanted to desecrate the Aqsa Mosque and the holy month of Ramadan,” Sheikh Ekrima Sabri, a Muslim cleric who preaches at the mosque and served as the grand mufti of Jerusalem between 1994 and 2006, told the New York Times.

Other political observers agreed. “The first buds of the escalation of terrorism are already apparent,” former Prime Minister Ehud Olmert wrote in his May 7 column in the Jerusalem Post. In a prior column, Olmert highlighted “a serious and provocative phenomenon that is designed to systematically push Palestinian citizens into a corner, until they have no choice but to resort to violent reactions.”

With tensions high, Olmert continued, “It doesn’t take much to light a big fire — another provocation by the hilltop youth [the term used to describe the far-right Jewish Israeli settlers occupying the West Bank, in violation of international law], another burning of an olive tree or a lack of consideration for Muslims celebrating Ramadan and especially the continued closing of the eyes of law enforcement officials from the provocations of the hilltop youth and their partners — and everything will break out and we will lose control.”

That’s exactly what happened. On May 10 — “Jerusalem Day” to right-wing Israelis, who stage a march through the Old City’s Muslim Quarter that culminates at the Western Wall — Israeli police raided the mosque yet again. Somehow, a cypress tree inside the mosque compound caught fire, right around the time a crowd of young Jewish students appeared at the Western Wall — where they were recorded in a “frenzy,” as the Intercept put it, singing a violent “revenge song,” described by experts as both genocidal and suicidal, popularized by the ultranationalist, fascist Kahanist sect.

Hamas fired the first rockets from the Gaza strip that evening.

Police in Israel are the responsibility of the national Ministry of Public Security, which is currently headed by Ohana. Israeli media sources describe Ohana as a staunch supporter of Netanyahu’s continued control of the country. Ohana put himself on record in late March, following the inconclusive election of March 23, as opposing any government that wasn’t formed by Likud.

Last summer, as protesters filled streets in the United States and repeatedly squared off with police — who responded with “violence, excessive force, and abuse,” as a Human Rights Watch report described it — Ohana became incensed that Israeli police weren’t cracking down on anti-Netanyahu protesters in Jerusalem. Ahead of the March election, Netanyahu’s opponents accused Israeli police of using “routine” violence to quash anti-Bibi protests.

On May 19, when his police commissioner suggested that “both sides” had committed acts of violence, Ohana fired off an angry tweet calling the comments “outrageous remarks that did not need to be said.” Ohana placed blame squarely at the feet of Palestinians.

“In order to deal with the problem we need to recognize it: Arab rioters attacked Jews, police officers, synagogues,” Ohana posted, according to Haaretz. “The policy is to act aggressively in the face of terrorist rioters.” He did not mention Al-Aqsa Mosque.

In this context, using police to agitate Palestinians fits an established pattern.

“Was Netanyahu controlling things from A to Z? No. It was more likely half conspiracy and half contingency,” Amos Harel, a reporter for Haaretz, told Foreign Policy. “All Netanyahu needed was to maybe give things a little push, and the dice rolled in his favor.” 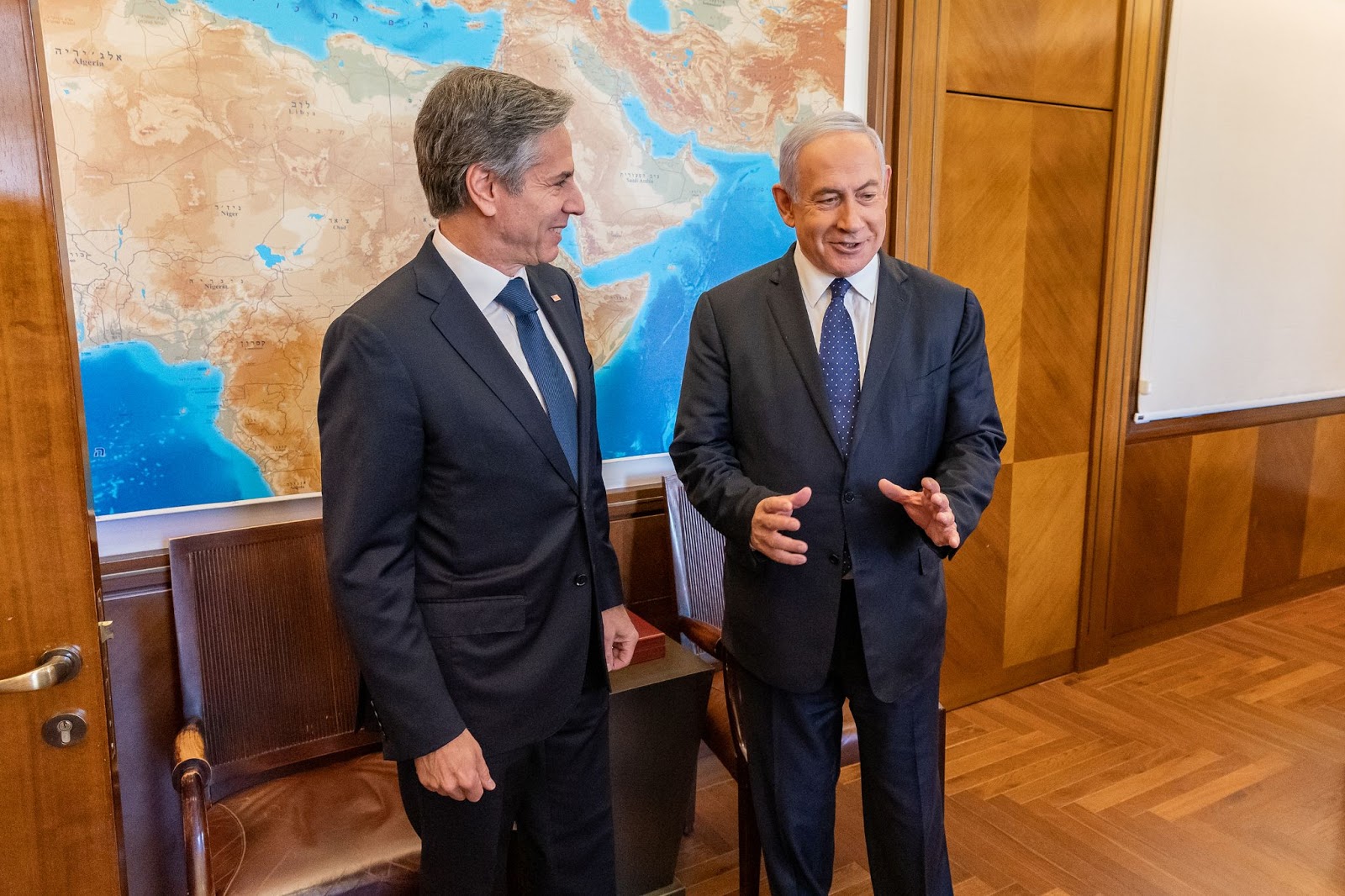 Days after the cease-fire ending the latest war in Gaza, Secretary of State Antony Blinken meets with Israeli Prime Minister Benjamin Netanyahu in Jerusalem on May 25, 2021. Photo credit: U.S. Department of State / Flickr

On Tuesday, the day Blinken met with Netanyahu — the first visit to the US’ very special friend in the Middle East since the conclusion of the 11-day war — Kan News, the Israeli state broadcasting company, posted a pair of videos from Sheikh Jarrah.

Filmed on May 18, but not published until the afternoon of May 25 local time, the videos show Israeli police ordering a teenage Palestinian girl into her home and then, while she was moving through her front door, shooting her in the back with a “less-lethal” round.

Kan News said she was shot with a “sponge bullet.” Sponge grenades are some of the most common less-lethal rounds deployed against protesters in the United States, and can cause serious injury or death when fired from close range or when striking a person in the head or throat. According to Al Bawaba, a news site based in Jordan, the teenager, identified as 15-year-old Jana Al Kiswani, suffered cracked vertebrae and lung bruising.

The May 18 police crackdowns across Israel preceded the end of the war that killed more than 200 Palestinians, left as many as 77,000 homeless, and cut water and electricity for several hundred thousand more in Gaza.

News coverage in the United States tended to focus on the asymmetrical volleys exchanged between Gaza and Israel — how many rockets Hamas had been firing toward Israeli cities; how many of them were intercepted by Israel’s US-funded Iron Dome missile defense; and Israel’s choices to flatten civilian buildings in Gaza, like the 12-story mixed-use tower that housed the offices of the Associated Press (and, according to Israel, Hamas).

That obscured what was going on back in Israel between Israeli police and Palestinian civilians in the West Bank and in East Jerusalem neighborhoods like Sheikh Jarrah, where Israeli settlers pushed claims to homes occupied by Palestinian families. At least some foreign correspondents noted that police violence elsewhere in Israel continued throughout the war.

Also on May 18, the same day Kiswani was shot in her home, Mark Stone, a correspondent for UK-based Sky News, reported seeing “a lot more instances of entirely unnecessary, provocative behavior from Israeli police/military.” This behavior included the use of stun grenades, tear gas, and a water cannon that fires skunk water — a foul, rancid brew that “takes days to get off” the skin — driving up and down streets in East Jerusalem, soaking Palestinian-owned homes.

Israel’s political chaos is primed to continue through next month, when the Knesset’s mandate to form a government will expire. After that happens, Israelis will go to the polls yet again, in the hopes that this fifth election in two years results in a clear winner.

The backdrop for this election appears to be more instability — and, possibly, another war. On May 23, Jewish settlers entered the Al-Aqsa Mosque complex — escorted by Israeli police, who, according to Palestinian media reports, had staged another raid on praying Muslims in order to clear the area. That prompted an outburst Wednesday from Yahya Sinwar, Hamas’ leader in Gaza, who vowed retribution if Israel “violates” the mosque — a near repetition of what happened in April and earlier this month, as if to a script.