A girl covers her face while crying as she is moved away from clashes. Photo credit: Hunter Williamson / WhoWhatWhy
Apprentice Stories International

Deadly Clashes in Beirut as Lebanon Holds Its Breath

BEIRUT — With the Lebanese military standing by, heavy fighting erupted in Lebanon’s capital on Thursday following violent protests against the judge leading an investigation into the Port of Beirut explosion that occurred last year.

At least six were killed and 30 wounded after unknown gunmen fired on Shiite protesters, prompting a prolonged battle that saw intense small arms fire splitting the air and rocket propelled grenades slamming into buildings and streets, bringing back memories of Lebanon’s 15-year civil war from decades ago.

Before the clashes, supporters of the Iranian-backed Lebanese party Hezbollah and its Shia ally Amal Movement staged protests against Judge Tarek Bitar, a widely supported figure who has drawn the ire of the political establishment as he repeatedly seeks to question current and former officials and issue arrest warrants.

As the protesters made their way toward a predominantly Christian area, gunmen shot and killed at least two people, witnesses said. Amal and Hezbollah accused the Lebanese Forces, a Christian political party, of firing on its supporters, a claim that the latter denied.

As fighting raged, a Lebanese Forces member of parliament tweeted that the clashes were between Hezbollah and “Lebanese who are free from all sects.” Witnesses said that Amal fighters also participated alongside Hezbollah.

Lebanese military forces blocked off roads and remained posted on foot and in armored vehicles on an adjacent street but refrained from interfering in the fighting. The Lebanese military later reported that it had arrested nine people in relation to the clashes.

The protests and fighting coincided with a US delegation visit to press for reforms and free and fair elections next year to lift the country out of an array of crises that include hyperinflation and economic collapse, poverty, mass emigration, and an acute medical and fuel shortage.

Leading the delegation was Under Secretary of State for Political Affairs Victoria Nuland, who announced an additional $67 million in US security assistance to the military in order “to ensure Lebanese security and sovereignty.” The announcement brought the total amount of US aid provided to Lebanon’s armed forces to $240 million this year, she said. 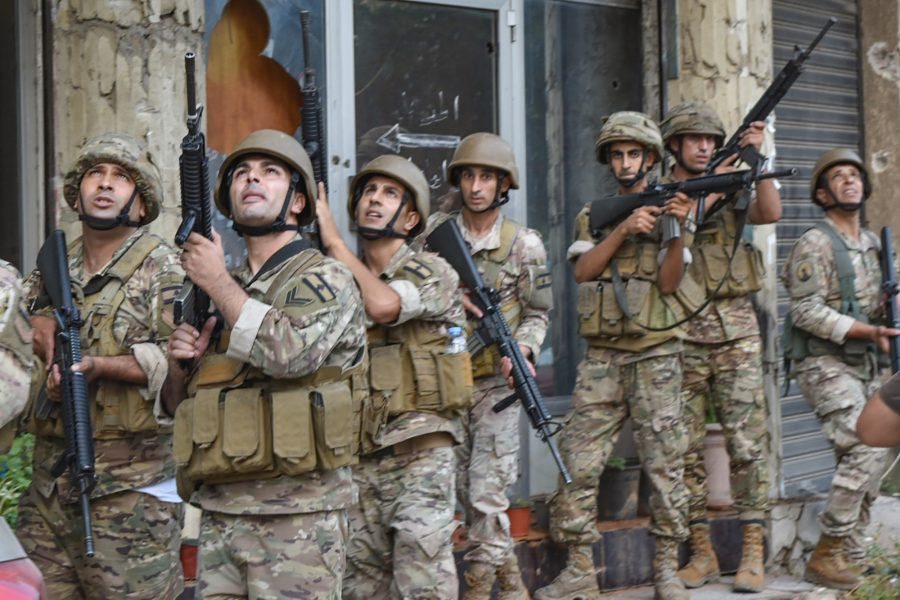 Earlier in the day as the clashes began, Hassan Salman, a fighter with Hezbollah, defended the group against critics who have called for the party to be disarmed and disbanded.

“They say we are terrorists,” Salman said. “We are not terrorists.”

Amid a dire fuel shortage that has disrupted transportation and led to prolonged power outages, he pointed to Hezbollah’s role in facilitating the delivery of Iranian fuel to Lebanon as an example of the contribution that the party makes to the country’s well being.

“We want to make Lebanon a good country for Lebanese,” Salman said.

The US considers Hezbollah a terrorist organization, and Nuland referred to the Iranian fuel delivery as a publicity stunt with no long-term benefit.

It was unclear what exactly prompted the fighting Thursday, and experts differed in their assessment.

Tony Badran, a research fellow at the Foundation for Defense of Democracies, suggested the possibility that Hezbollah and Amal wanted to use the event to create an opportunity to discredit Bitar and the investigation.

“‘Is this worth it, is this what this investigation is about, to take the country into civil war?’ There is a very deliberate attempt in this regard to frame it in those terms and therefore to put pressure on him to resign,” Badran said.

The Beirut port explosion on August 4, 2020, left over 200 dead and caused billions of dollars worth of damage. It scarred the nation and exacerbated the already dire crises facing the country. Protesters and families of victims have repeatedly demanded justice as they accuse officials of trying to avoid responsibility. 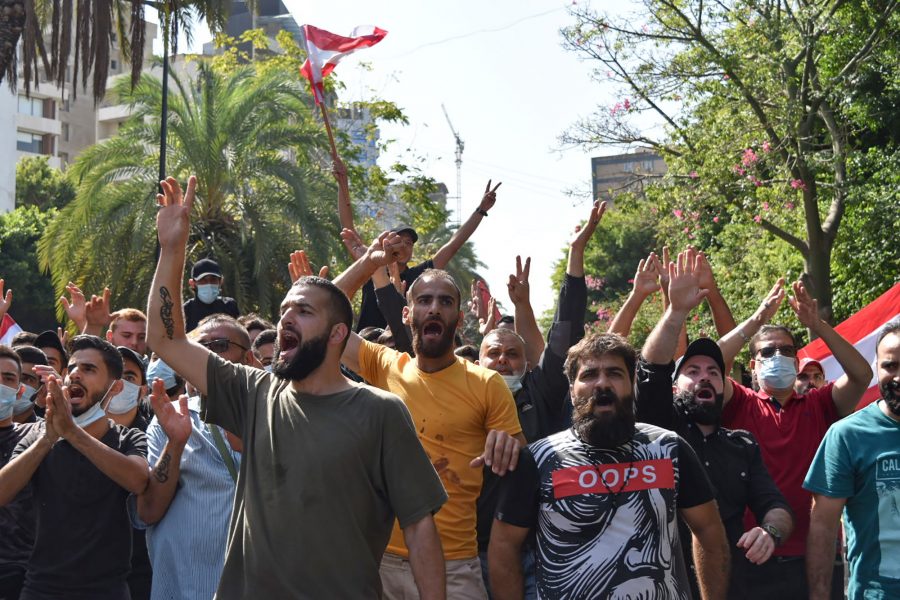 President Michel Aoun condemned the clashes and sought to assure those concerned about further violence.

“What happened will be the subject of security and judicial follow-up,” said Aoun, who is a Maronite Christian. “And I, for my part, will ensure that the investigation reaches the truth of what happened in order to hold those responsible and instigators to account just like any other judicial investigation, including the investigation into the port crime, which was and will remain a priority of my work and my commitment towards the Lebanese and the international community.”

Despite the president’s comments in support of the investigation, current and former officials have repeatedly attempted to have Bitar replaced in what critics say is political interference in the judicial process.

On Thursday, a court rejected a lawsuit put forward by MPs allied with Hezbollah to have Bitar removed. The lawsuits were similar to previous ones and had also put the investigation on hold. Bitar has repeatedly summoned officials who fail to appear for questioning, prompting the judge to issue arrest warrants.

As he watched the fighting ensue in Beirut, Omar Jammal, a college student, lambasted the officials for filing the lawsuits.

“Everything that has to do with the Lebanese government is corrupt,” Jammal said. “They shouldn’t have the legal right to do that.”

Reflecting the views of many Lebanese, the 21-year-old said he supported Bitar and the investigation.

“He wants justice for the people who died, for their parents, for their siblings,” Jammal said. 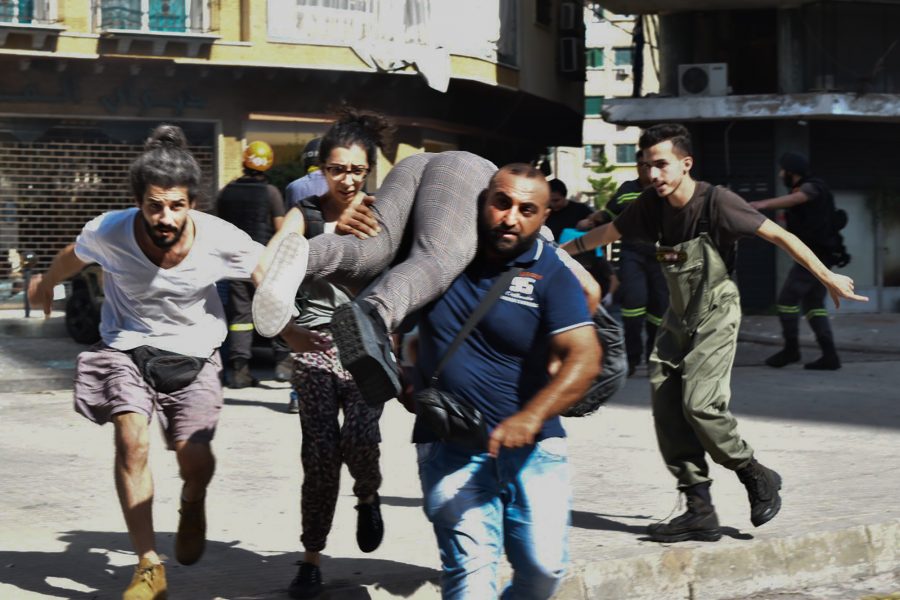 Despite such support, Bitar has provoked the anger of Hezbollah and other political parties and government officials. In a speech Monday night, Hezbollah leader Hassan Nasrallah reportedly accused Bitar of political bias. Bitar was also reportedly threatened last month by Hezbollah’s security chief.

Salman, the Hezbollah fighter, accused Bitar of harboring ties with the US and attempting to undermine Hezbollah.

In a statement, UN Special Coordinator for Lebanon Joanna Wronecka stressed the importance of judicial independence.

“Lifting Lebanon out of its current crisis and moving forward on reforms requires the efficient functioning of the state’s legislative, executive, and judicial institutions,” she said.

As the day’s fighting ended, Akram, a business owner who declined to provide his last name, assessed the damage to his store. Surveying the aftermath, he said he felt nothing about the destruction.

“This is Lebanon,” he said nonchalantly. “Nothing new. It’s been like this for a hundred years.”

A few stores down, Hussain Al Hajj swept glass from the entrance of his cafe. He and others had taken cover inside as bullets came in.

“I think some people just want to make this situation worse,” he said.