Protesters in front of the Russian embassy in Warsaw, Poland, on February 23, 2022, to show solidarity with the people of Ukraine in anticipation of Russia’s invasion. Photo credit: © Aleksander Kalka/ZUMA Press Wire
International Ukraine

Back to the Cold War

Vladimir Putin’s murderous blitzkrieg against Ukraine is basically the act of a schoolyard bully who breaks the rules, smashes your nose, and then asks, “What are you going to do about it?” The answer, at least for the moment, apart from leveling financially painful sanctions, is not much. The problem with this bully is that he has access to intercontinental nuclear missiles and a lot more is at stake than just Ukraine.

Putin may survive this round, but the post-Ukraine world he has created is not going to be the same. To start with, nothing that Putin says from here on out will have any credibility. That may explain US Secretary of State Antony Blinken’s last minute decision to cancel his scheduled meeting with his counterpart, Sergey Lavrov. It’s not just that Putin is a liar — that’s obvious — it’s that, much like his former partner in bromance, Donald Trump, Putin appears to be living in his own alternate reality. Does anyone seriously believe Putin’s claim that Ukraine’s independent government, presided over by a Jewish humorist, who once played a fictional president on a comic TV series, is composed of hardened Nazis?

Putin’s increasingly questionable denial of Ukraine’s national identity — his counter-factual insistence that it has always been a part of the Russia and that Moscow is concerned about the welfare of Ukrainians and is therefore entitled to slaughter them — is so disconnected from reality that it would be laughable, yet he seems quite capable of imposing this distorted vision on the Russian public thanks to a tightly controlled propaganda campaign in a media environment in which a formerly outspoken opposition press has been largely silenced.

Putin aside, the attack on Ukraine, which is beginning to look like the assassination of a former Soviet colonial satellite, has dramatically changed the security environment in Europe. Any confidence in Russia and Russians that had been allowed to flourish following perestroika and the collapse of the Berlin Wall has been swept aside. Even Trump’s inexplicable but obviously genuine admiration for Putin looks dangerously naïve.

In terms of land mass, [Ukraine] is the second-largest country in Europe.

It is clear now, if it wasn’t in the past, that when it comes to European security, Ukraine is a keystone that can have a critical impact on a less than certain future. In terms of land mass, it is the second-largest country in Europe. More importantly, Ukraine serves as a gateway through which Russia can menace its former satellites in eastern Europe. Under different circumstances it could also provide access for NATO to threaten the southern flank of Russia, especially if NATO were allowed to station medium-range missiles on Ukraine’s territory. That is Putin’s argument. The problem here is that NATO has enough problems maintaining its own unity, much less engaging in aggressive behavior. In contrast, Putin has shown an appetite for using force and taking risks to expand Russia’s otherwise shrinking influence in the world. 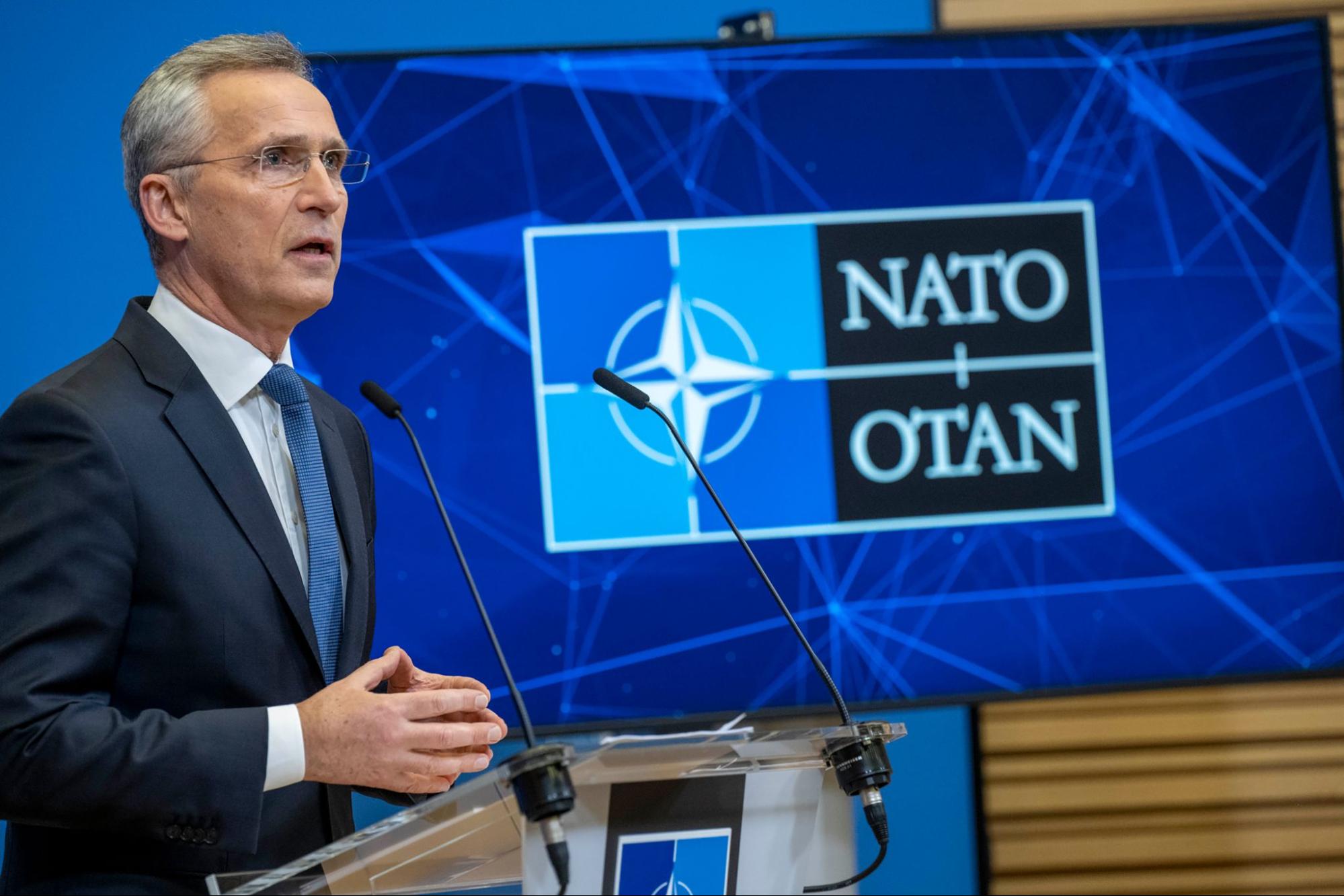 Given Putin’s ambition and Europe’s vulnerability, the idea of making Ukraine a functional member of NATO never made much sense. The best future for Ukraine, in fact, would be to guarantee its absolute neutrality and safeguard its independence, turning it into an independent buffer zone.

One alternative is for NATO to post troops as a blocking force along Ukraine’s extended western border which connects it to Poland, Hungary, Slovakia, Romania, and Moldova. Stationing that kind of force in perpetuity would be an expensive proposition, which will require the nations of the European Union to beef up their respective militaries.

In the past, the US has borne the lion’s share of such expenses. The cost would now very likely shift to the European powers themselves. All of this could be avoided if Putin were to agree to at least a partial withdrawal, establishing the western part of Ukraine as a neutral zone. What seems more likely is that Putin will resort to standard Soviet tactics, using Russian troops to place the government in Kyiv under arrest and rounding up the country’s independent politicians and consigning them to a hidden dungeon or simply “disappearing” them permanently. If things move in that direction, dreams of a globalized world in which everyone is free to do what they like is likely to become a memory of a golden past.

The current impasse appears to have been triggered at least in part by Trump’s decision to suspend US participation in the 1987 Intermediate-Range Nuclear Forces Treaty (INF) and then to formally quit the treaty altogether in August 2019. The INF banned highly mobile, medium-range ballistic missiles capable of striking at distances from 500 to 5,500 kilometers. These missiles, intended to support combat troops in theater-wide operations, have always been considered highly destabilizing. They enabled Russian forces to directly target Europe’s major cities.

The Trump argument for killing the treaty, propounded by then-Secretary of Defense Mike Pompeo, was that the Russians had violated its terms when they introduced two new missiles. Rejecting US allegations, the Kremlin insisted that its newest missiles had ranges that were either shorter or longer than the ones banned by the INF. It then accused the US of violating the treaty.

The Russians had already begun chafing under the INF’s restrictions even before Trump trashed the treaty. Putin’s complaint was that China, which had not been included in the initial treaty, had been making major strides in designing and producing its own new intermediate range missiles.

With the US administration under Trump drifting towards isolation and evincing little interest in NATO, arms control showed signs of crumbling from neglect. As soon as the US had freed itself from the INF, the Pentagon started rushing development of a new generation of updated intermediate-range missiles. With little public discussion, the Pentagon put the finishing touches on a precision strike missile which was upgraded to have a 500 to 600-kilometer range and it began working on a hypersonic missile with a 2,700-kilometer range.

From the Kremlin’s point of view, Trump’s decision combined with Western interest in Ukraine risked creating a situation that might loosely resemble a Cuban missile crisis in reverse. Where the US had been confronted in 1962 with the threat of Soviet nuclear missiles in Cuba, the Russians now found themselves facing the possibility that NATO missiles in Ukraine might someday threaten Russia’s southern flank.

In that context, the solution to the current Ukraine crisis might be to quietly agree to eliminate missiles from Ukraine altogether, along with a pledge not to include that country in NATO planning. In exchange for this pledge, Moscow would need to agree to pull back its forces, at least from western Ukraine, and to otherwise allow the Ukrainians decide their own future. After the violent Russian attacks across Ukraine, it may be too late for that now.

If Putin refuses to back down, it seems likely that NATO’s allies will try to make sanctions as painful and damaging as possible in the hope that they can effectively isolate Russia and lock it in a financial deep freeze. But this tactic is likely to prove expensive for everyone concerned.

The initial phase of sanctions has already cost the Russian stock market some $200 billion in losses. The Russians aren’t the only ones to suffer. With Russian oil almost certain to be a target of sanctions, the price of a barrel of crude soared to more than $103. That means that global transportation costs are likely to increase dramatically, making just about everything more expensive and further slowing down global economic growth, which already took a beating from COVID-19. Putin’s assault on Ukraine, in short, may be a self-inflicted wound, but it is one that is likely to end up hurting just about everyone.