Afghanistan’s ‘Businesswoman of the Year’ Escapes From Kabul

It is Monday, August 16, 2021. Hassina Syed, who is 41, is in central Kabul when her mobile phone rings. Her friend screams, shouting into the receiver: “Take your bag and run! They are here and they will kill you.”

She sees people around her doing the same, dressed in business suits, dresses, and office uniforms. The air is filled with fear and confusion.

She fears her friend is right — the Taliban will kill her if they can. 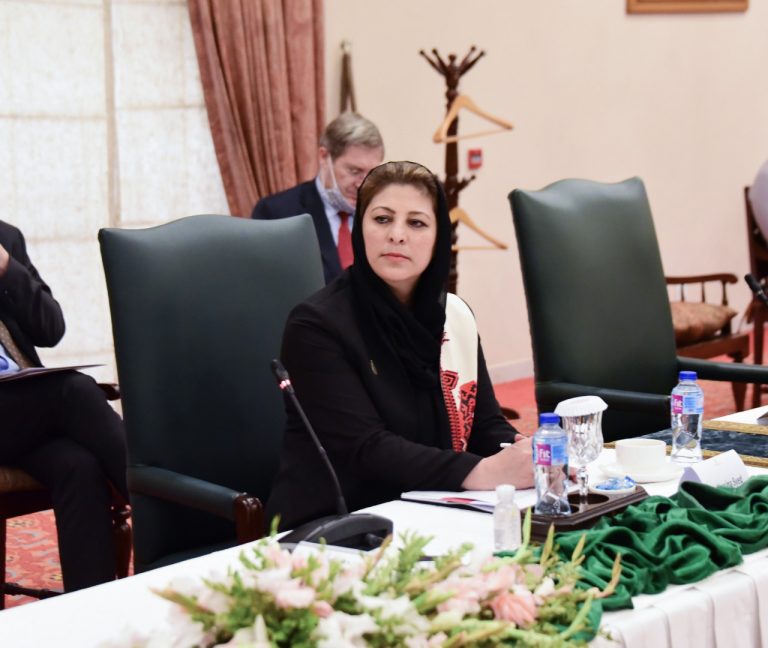 During the previous government in Kabul, Hassina Syed participated in trade delegations to foreign countries, but was also extremely active in seeking a more inclusive political settlement as the most effective way for achieving peace in Afghanistan. Photo credit: Global Geneva

Hassina Syed was recently named Afghanistan’s Businesswoman of the Year. She has also been hailed by Forbes magazine as one of the country’s most successful entrepreneurs. She was the only female member of the Afghan Chamber of Commerce and Industry, and the only woman to have taken part in official trade delegations led by former President Hamid Karzai.

She has created rows of successful businesses over the past 20 years, selling everything from hotels and mattresses to bulletproof cars and renting houses to media giants like CNN. Hassina Syed is also a women’s activist and has been an advisory voice on the sidelines of the Doha peace talks.

“I knew they would come after me.”

When Hassina Syed realized that Kabul has fallen to the Taliban, she understood that she had little time to act. She told Svenska Dagbladet about her escape from the chaos in Kabul, a city where streets are full of combatants and newly released prisoners.

The prominent businesswoman is one of thousands of Afghans who have managed to get out of the country with the help of a military aircraft. Most of those fleeing have been men. Most women do not dare to risk jostling with men for a seat on a flight, she says.

Hassina is lucky. Late on Monday night, the day after the fall of Kabul, friends take her to a British military flight at the airport. There she pushes her way forward and onto the plane together with several hundred other Afghans. Once the plane takes off, everyone is crying. “Everyone,” says Hassina.

“This happened in 2000. No one thought it could happen again, that the Taliban could come back. It was as if everything we had created and built up over the past 20 years disappeared with the snap of a finger.”

She describes the British soldiers on board as angels. One of them reached out his hand to Hassina and helped her onto the plane at the last moment, when the situation turned turbulent. On board, the British handed out water bottles and biscuits and try to calm people down. “The soldiers were so young,” she says. “They could have been our sons, but they acted like our mothers. We had fantastic moral support.”

The military aircraft took the Afghans to Dubai, then Greece for refueling, and finally landed in Birmingham, UK. Here, Hassina is now in COVID-19 quarantine waiting to get out and see her husband and three daughters in London. They left Afghanistan a few years ago because of the security situation.

From here, she closely follows the news about the dramatic situation in Afghanistan, both the chaos at the airport with the mass exodus of people and fresh reports about human rights violations. In particular, Hassina is following news about the treatment of women.

What will happen to Afghan women under Taliban rule?

As a businesswoman, Hassina (middle) has also been active with her support for women and children, including widows. Photo credit: Global Geneva

The Plight of Women — Back to Square One

Hassina is plagued by the same concerns as many. She worries about women no longer being able to study or work, not being allowed to leave their homes without male company, and the risk of violence, oppression, and executions. She is hearing disturbing reports from friends she has spoken to in the country in recent days.

“All women want to escape. Leave the country as soon as possible. Many are very afraid.” Her voice breaks, and she falls into tears.

“I have been so proud of Afghanistan when I traveled to other countries. I’ve told them how we built up our country and about the progress for women and girls. Today we have female doctors, teachers, and scientific researchers. We even have women building robots in Afghanistan.”

“But now we are back to square one.”

Hassina is still cautiously hopeful. The Taliban can’t just erase 20 years of progress and “un-educate” women, she points out. A whole generation of women has studied, worked, become aware of their rights, and are politically active. A Western middle class has emerged in major cities. And that reality cannot be erased, she believes.

“Nor do the Taliban want all women to flee and the whole country to be emptied of sharp minds. They do not want a brain drain. If they choose a more moderate path, people will stay or return, and the country can be rebuilt in a better way.”

She says the Taliban also know that the outside world will regard Afghanistan as a pariah state if it returns to the reign of terror for women that prevailed during the Taliban years of 1996-2001. They need international support and recognition. They cannot risk the isolation of 20 years ago.

“A lot has also happened in two decades. We have gone from landlines to mobiles, we have the internet and social media like Twitter and Instagram. You can’t put an entire country in a black hole in the ground anymore.”

All this lends some optimism that many Taliban have been living in other countries over these years, including Qatar and Russia, says Hassina.

“They have seen the modern world and how women dress, act, and think. Many of the Taliban leaders’ children have gone to schools in these countries and hopefully been raised to think more progressively about the role and rights of women.”

But the uncertainty is great. The development can go in the wrong direction and women lose their rights, she says. For the moment, the Taliban say women will be able to continue studying and working — as long as it is within the framework of Sharia law. They also claim that women and people who worked for previous regimes will be offered positions in the new government.

But many fear the country will gradually return to the way things were in the 1990s.

Girls may continue to study, but hardly with boys anymore, Hassina believes. It will probably be difficult for women to pursue careers in the way she has done. And women are likely to be forced to wear full-body clothing, notably the burqa, when they leave the home. If not, they may risk physical punishment.

“I can live with that. It’s okay to wear full-body clothes if that’s the price to pay for continuing to study, work and have other rights. This is not about clothing but about mentality and opportunities for women.”

Hassina is hopeful — but also a realist. It is possible that the Taliban are now trying to charm the outside world with a more open image. As soon as the media spotlight goes away and countries turn their eyes elsewhere, the iron rule may be reinstated. Or Afghanistan may be less restrictive than it was in the 1990s, but with continued repression of women who will lose many rights.

“Who knows, maybe in the future we will read in the history books that ‘in the past, there were women studying and working in Afghanistan.’ But it must not end that badly.”

It’s not even certain that there will be a clear or functioning government under the Taliban, she adds. They are deeply divided, with different factions already fighting each other. The Taliban are not united, she adds. “Hard-liners and moderate branches will wage war against each other and throw Afghanistan into more chaos. May the more moderate faction win — for everyone’s sake.”

One of Sweden’s leading journalists, Gunilla von Hall is the Geneva-based correspondent of Svenska Dagbladet reporting global issues, including the United Nations. A version of this article was first published in Swedish.