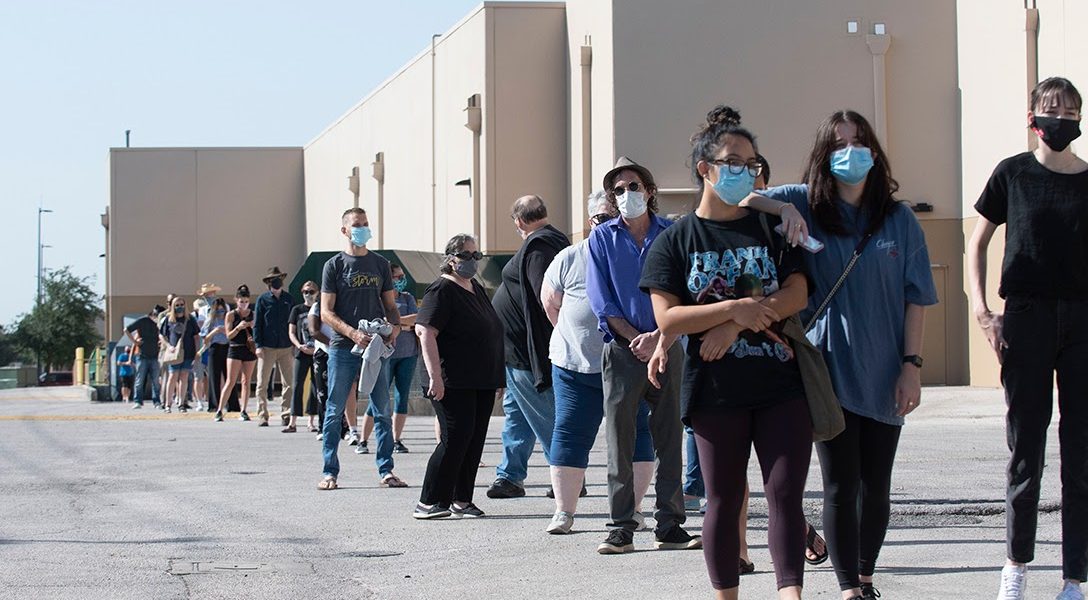 Long lines of voters queue up to cast their ballots on the first day of early voting in Austin, TX. County elections officials are reporting record numbers of early voters and only minor processing problems as 14,000 ballots were cast by noon on October 13, 2020. Photo credit: © Bob Daemmrich/ZUMA Wire
Elections

Give credit to young voters as Texans cast more than 9 million votes before Election Day, more than all votes cast statewide in 2016.

A report by Tufts University and Tisch College’s CIRCLE, a research group focused on youth civic engagement, has estimated that over 1.3 million young Texans had already voted by November 1 — more than the 1.2 million total youth votes cast four years ago.

Millennials (born between 1981 and 1996) and members of Generation Z (born in 1997 and after) who are old enough to vote won’t necessarily dye the state blue. The polling website FiveThirtyEight’s election forecast model found Trump was “slightly favored” to win Texas, giving him a 61 percent chance of victory in the state. FiveThirtyEight’s average of polls had Trump up by 1 percent in Texas the day before the election.  Polls, however, may undercount young voters, as they can be more difficult to reach by phone.

Texas has added 1.8 million registered voters since the last presidential election. Many of the new voters are young and live in the state’s growing urban and suburban counties, which tend to vote Democratic. Young Texans are much bluer than their elders, and one factor driving the youth vote may be dissatisfaction with the role of government in solving social and economic issues. In a survey conducted by the Pew Research Center in 2018, 64 percent of millennials said the government should take a more active approach to solving such issues; 70 percent of Gen Z agreed.

Coming from the polling location at Texas State University’s Performing Arts Center was Azure Rolle, a 22-year-old junior from the university, who expressed support for a more active government. She likes “that Biden has been trying to tax the rich… and I like that he’s for reducing student loan debt.” Biden’s policies, Rolle said, make him seem “for the people. I don’t feel like Trump is for everybody.”

“I really wanted Bernie Sanders to be on the ballot,” said Renee Salem, a 26-year-old recent graduate of Texas State University who paid a quick visit to Kyle City Hall to vote early. “But I knew that I wanted to vote for Biden, because it isn’t just about me. I gave up what I wanted to vote for because I knew voting for Biden was the right choice.”

Rolle, Salem, and others like them have voted in record numbers because of major issues to be dealt with by the next president, especially the fate of the Affordable Care Act, which is in danger of being struck down by a conservative US Supreme Court.

One of many young voters concerned about health care is Karolina Bonilla, a 22-year-old senior at St. Edward’s University who has been spending time at her parents’ home in Brownsville, TX, because of the pandemic. “Like a lot of young people in America, health care is a really big issue for me,” she said. “Someone who advocates for a universal or very good health care plan for people is someone who I wanted to vote for.”

Shane Valdez, a 24-year-old who is also a Brownsville resident, has been trying to transition from substitute teaching to teaching full-time. He said that he’s “fully aware” that there are hundreds of thousands of citizens across the US who are in the same boat as he is — “working full time but not receiving the full-time benefits,” such as health care, because they’re considered hourly workers.

It will be interesting to see how younger voters’ apparent turn toward the Democrats will affect the election on a statewide level. It has already been felt in Shane Valdez’s family.

“My political views were actually aligned completely with my father’s right up until the latter half of high school,” said Valdez, who, like many Texans grew up in a household headed by conservatives like his Generation X father. Valdez pointed out that his political opinions have been shaped by his own experiences growing up as a millennial. “Not only did I grow a better sense of identity, but I became informed by the current political climate thanks to colleagues, peers, and professors… I was now learning about the world around me by a myriad of outlets.”

The Democrats still have work to do if they want to hold onto voters like Renee Salem, the reluctant Biden supporter. “I don’t really feel like the Democratic Party is everything I want in a party, so I don’t want to say that I’m a part of it until I’m solid in my own political beliefs,” she said. Salem identifies as an independent and notes that Democrats will need to work to earn the support of young voters in future elections.

Can these newly enthused young voters sway the results in the upcoming election? We should know soon.