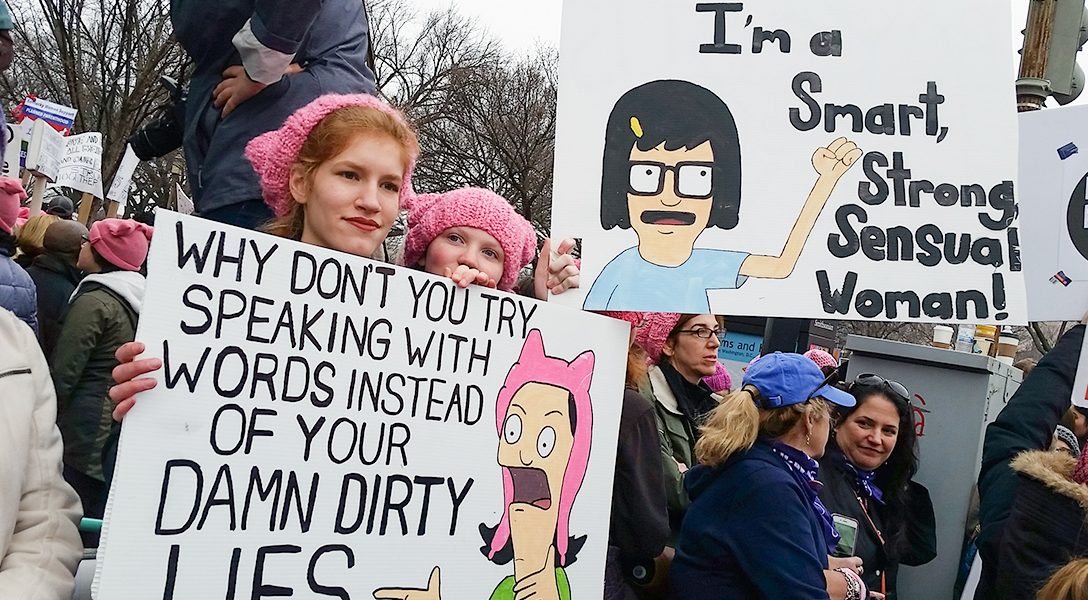 The Women’s March Was Huge — So What Happens Next?

Judging by his remarks, as well as the bizarre “press conference” of new White House spokesman Sean Spicer, Donald Trump did not like being upstaged by women protesters who came to Washington on the second day of his presidency. He might have to get used to it.

Every one of the participants who spoke to WhoWhatWhy during Saturday’s massive rally insisted that the march was not the culmination of their activism — it was only the beginning.

Despite Spicer’s attempt to spin the facts, reliable analysts determined that more people showed up to protest against Trump on Saturday than supported him on Inauguration Day — and that was just in the nation’s capital. Millions more marched across the country, and tens of thousands joined in around the world.

The marches were among the largest protests in US history, and they were the most visible since Tea Party protesters in 2009 ignited a movement that changed the US political landscape. While no single Tea Party protest equaled this weekend’s demonstrations in size, the Tea Party movement effectively forced the GOP to swerve sharply to the right.

Which raises the question: Will the new movement heralded by this weekend’s marches have a lasting impact on party politics in America? Or will it recede into inaction like so many protest-driven movements have in the past?

All of the protesters who spoke to WhoWhatWhy said they wanted to get more involved in their local communities. Most had been relatively detached from political action before the election of Trump. Many said that this was their first demonstration. They felt that at this moment, they had no choice but to get involved. “The election last year was kind of like a swift kick in the butt,” Erica Romanos, of Somerdale, NJ, told WhoWhatWhy. She sees the rise of Trump as a reminder of the pitfalls of complacency, and wishes now that she had gotten involved a few months ago. Romanos says she’s called her local Democratic Party office several times since the election, asking how she could get active, but has yet to hear back. She wonders if it might be time for her to start an activist group herself. “Hopefully all these people organized here are taking the steps to get involved in their local government.”

“I would hope everyone from out of town would go home and run for local office,” says Phil Bye, a DC resident and lobbyist for climate science, who worries about the incoming administration. “It’s nice to have half a million people on the mall, but half a dozen people in your county administrator’s office would accomplish twice as much.”

Many marchers agreed that local engagement was crucial. Jane Petroski, who came with her friend Carolyn on a bus from Altoona, PA, insisted that “this is not a one shot deal.” Jane and Carolyn spoke of how Altoona tends to vote Republican, but insisted that they would change that. They have a plan for reopening the Democratic party headquarters in the town, which hasn’t been active for years.

Jane worked for the Democrats during the presidential election, registering voters, donating to Hillary Clinton’s campaign, and even hosting campaign workers in her house. But she was disappointed to see so many people sitting on the sidelines until after the election was already lost. Still, she hopes it is not too late for progressive efforts: “In our particular area, it’s creating a lot of grassroots action.”

Many at the march expressed frustration about the traditional campaign that the Democratic Party mounted against Trump. They felt that a grassroots effort, directed from the bottom up, might have succeeded where party leaders following the old rules of politics could not. Some cited Trump’s success as an outsider who won his party’s nomination and the presidency despite opposition from many of the GOP’s most important voices.

“Democrats ran an Establishment candidate and look what happened. Trump is probably worse but the Left was not convinced on Hillary’s record,” said Lenny Charles, who formerly ran the Independent News Network (INN). “Without proper commitment to liberal causes, Democrats are just limousine liberals. That’s how they ran in 2016, and that’s not going to win anything.”

In the wake of the election, numerous activist groups have sprouted up with the goal of finding ways to turn the energy and dedication that led to the Women’s Marches into concrete political action.

Groups like Daily Grab Back and Wall-Of-Us recommend specific actions that individuals can take to make a difference, while the website Indivisible provides guidelines for how to organize locally to put pressure on members of Congress, using tactics taken directly from the Tea Party movement. Local pressure is already starting to generate results. Last week, a Republican congressman from Colorado got into hot water with his constituents when he ran away from a crowd of voters demanding answers about the potential repeal of the Affordable Care Act, which could take health coverage away from millions. And large-scale call-in campaigns to members of Congress by constituents have begun, leading to acknowledgment of their efforts from some of the targeted members.

Beyond the Tea Party, the marches bring to mind other mass protest movements of the country’s past —  the Vietnam war protests in the 1960s, Martin Luther King Jr.’s March on Washington in 1963, and the Million Man March in 1995.

For Obi, an architect living in DC who participated in Saturday’s march and only provided his first name, the new political movement will have to take advantage of the best of the past in order to be successful. “It has to be an exclamation point, not a flashpoint,” he told WhoWhatWhy, emphasizing the need to put the march into the context of continued action, not an isolated incident. “We have to show that it means something.”

For some activists, the march means more than they could have imagined before the election. Marceleen Mosier, a 37-year-old communications director from an area of northern Wisconsin that went heavily for Trump, sees it as her duty to run for office when she gets back home. In her view, her state has become gerrymandered beyond reason (a federal judge recently struck down its electoral district apportionment scheme), and she wants to go from marching in Washington to running in Wisconsin.

Mosier is partnering with Emerge America, a group that encourages women to run for office in the Democratic Party. The day after the march, Emily’s List, a women’s advocacy organization, held a training session for 500 women hoping to enter politics. A collection of former Clinton and Obama campaign staffers just launched Run For Something, which helps people under 35 seek office for the first time.

“After the 2016 election we saw the need to build a bench of candidates from the town level all the way to the presidential level that support progressive values,” stated Amanda Litman, a Hillary For America alum and co-founder of Run for Something.

For many participants on Saturday, the Women’s March offered welcome proof that they were not alone in their new-found determination to change the political equation from the ground up.

Dan Engelke contributed to this article.