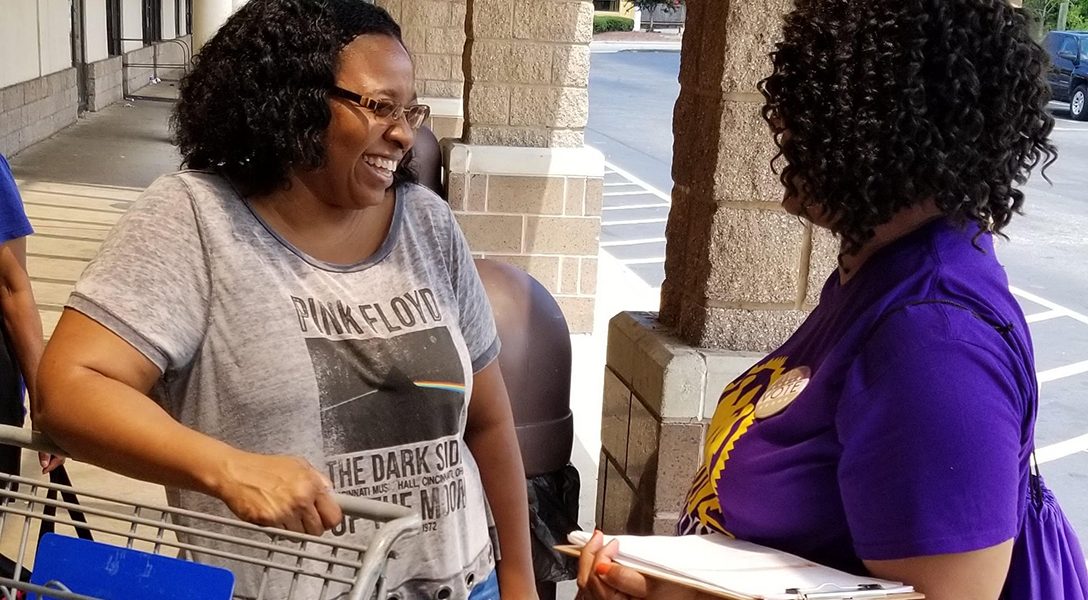 For decades, the Peach State was reliably red. But an increasingly diverse population in Georgia — coupled with the culmination of years-long efforts to fight the state’s deeply institutionalized voter suppression schemes — has meant that the state is projected to flip blue for the first time in 28 years. The state is also slated to hold run-off elections in early January for its two senate seats.

What are some of the factors that played into this? Georgia’s Republican Secretary of State Brad Raffensperger had instituted automatic driver’s license voter registration, 16 days of early voting before Election Day, and no-excuse absentee voting — an especially valuable policy during a pandemic that has brought with it record numbers of mail-in ballots.

Georgia also benefited from record-breaking voter turnout, particularly among young voters and voters of color. Black voters especially came out in droves across age and class demographics. But the real work in getting out the vote was spearheaded by grassroots organizers on the ground — many of them Black women.

When Stacey Abrams launched her bid for governor in 2018, she led a drive that registered 200,000 new voters, many of them from people of color, young people, and previous nonvoters. Abrams ended up losing the contested race after thousands of voters were removed from the voter registration rolls — a number similar to the number by which she lost the race.

The organization was able to register more than 800,000 voters in the lead up to the presidential race, shattering past records for voter registration in the state. Many across the country have said that these massive voter registration and engagement efforts by Abrams were key to flipping Georgia blue.

But it wasn’t only Abrams. Other grassroots organizers in Georgia — mainly women of color — have been working for decades to chip away at the state’s restrictive voter suppression schemes to make the voices of marginalized communities heard.

Because of practices which have their roots in the Jim Crow South, Georgia has long been criticized for the ways in which it makes voting more difficult for communities of color. For example, the state has employed an “exact match” process which flags even slight differences between voter registration forms and other government documents. Even a typo caused by a clerical error can jeopardize someone’s right to vote and cause their registration application to be put on hold. In 2016, 80.15 percent of these pending applications were from Black, Latinx, or Asian American voters, many of whom were never given the opportunity to fix the problem.

In the name of preventing alleged voter fraud, the state’s Republican election officials have also maintained one of the country’s most aggressive schemes to purge voter registration rolls of residents who have not voted in every election since they registered. These purges disproportionately disenfranchise Black voters — as they did in the 2018 race.

“One of the key things in Georgia is that we have a dynamic infrastructure of organizations that support each other’s work and strategize on the best ways to effectively reach people within our state in a variety of ways, [focusing] on the diverse communities that make up our state,” said Malika Redmond, the board chair of ProGeorgia, a nonprofit coalition dedicated to supporting nonpartisan organizations that focus on civic engagement work. “We’re very deliberate in our way of engaging with each other, strategizing and planning together, and supporting and lifting up the expertise within the various organizations.”

“We want to make sure that people that we target know about and can participate where they are and be civically engaged.”

Redmond has also served as the co-founder and executive director of Women Engaged, one of ProGeorgia’s member organizations, since 2014. Women Engaged is a nonpartisan organization committed to supporting voter engagement among new or low-activity voters in the greater metro Atlanta community. Because Women Engaged’s work is primarily driven by and based in low-income, predominantly Black communities, it advocates for Black women’s human rights, racial justice, and health care access.

“We’re talking to people ongoingly, about the issues that are important to them … and things that may be coming up in their community that may be important for them to be aware of,” Redmond said, giving examples such as national and local elections, the census, and efforts to protect the vote. “We want to make sure that people that we target know about and can participate where they are and be civically engaged.”

Lela Ali, MVP’s partnership associate and adviser, said that the organization works towards “supporting our groups and our partner organizations to really dream big and do the work to build transformational change and power across the state.”

While many people are focused on the fact that former Vice President Joe Biden beat President Donald Trump in this election, many of these groups have been doing their work for decades. “That really reflects the hard work that was put in. … These groups were doing this work for a very long time to get us even to this moment where we’re seeing these very close runoff elections that could really tip the US Senate,” said Ali.

“This wasn’t done overnight. There are a lot of organizations that laid the foundation that led us to this point. We are standing on their shoulders.”

Another partner group is Poder Latinx, a nonpartisan, issue-driven organization that focuses on issues important to the Latinx community in the US, such as economic justice, climate justice, and immigrant justice.

The group has only been active in Georgia since the end of the summer, but has emphasized the importance of collaborating with longer established groups and hiring and partnering with people from the communities in which Poder Latinx is organizing. The group works primarily in Gwinnett, Cobb, and Fulton counties — all of which make up the greater Atlanta region.

“We always need to acknowledge the work that’s been done for decades,” said Yadira Sanchez, Poder Latinx’s co-executive director. “This wasn’t done overnight. There are a lot of organizations that laid the foundation that led us to this point. We are standing on their shoulders.”

“Usually there has been a lack of investment in the South,” Sanchez said of the political landscape in states like Georgia come election season. “When we think of elections, they always go to battleground states and they pour resources there and they forget about the other states. And Georgia is really kind of showing how the other states are important too.”

Indeed, with two Senate seats and the Senate majority hanging in the balance, Georgia has emerged as a key player in the national landscape — one whose run-off election results will deeply affect not only Georgians but possibly the control of the Senate itself.

Redmond feels that both racism and sexism explain why major political parties have underinvested in Georgia and other southern states. “It’s about respecting the leadership of, particularly, Black women who are doing civic engagement work in the South,” she said. “It is about having a skewed view of whose voice has more value, who knows better, and who knows more.”

Redmond also sees such underinvestment as a reflection of a deeply American problem: The idea that women, and Black women especially, can somehow be expected to do the same amount of work as someone else and receive less compensation and credit for it.

“What we know is that Black women lead, Black women have led, Black women continue to lead, and we do that with the most vulnerable in our mind and in our hearts,” said Redmond. “I hear and see other Black women leaders, particularly here in Georgia, articulating that we’re not waiting for some kind of approval, or some kind of affirming of our humanity or who we are. We don’t need that. We never did. We are doing the work we do for ourselves, our communities. And what we will no longer tolerate is the lack of investment … because, obviously, when we are able to do the kind of work that we’re able to do, it helps everyone, and so, it will be recognized as such.”