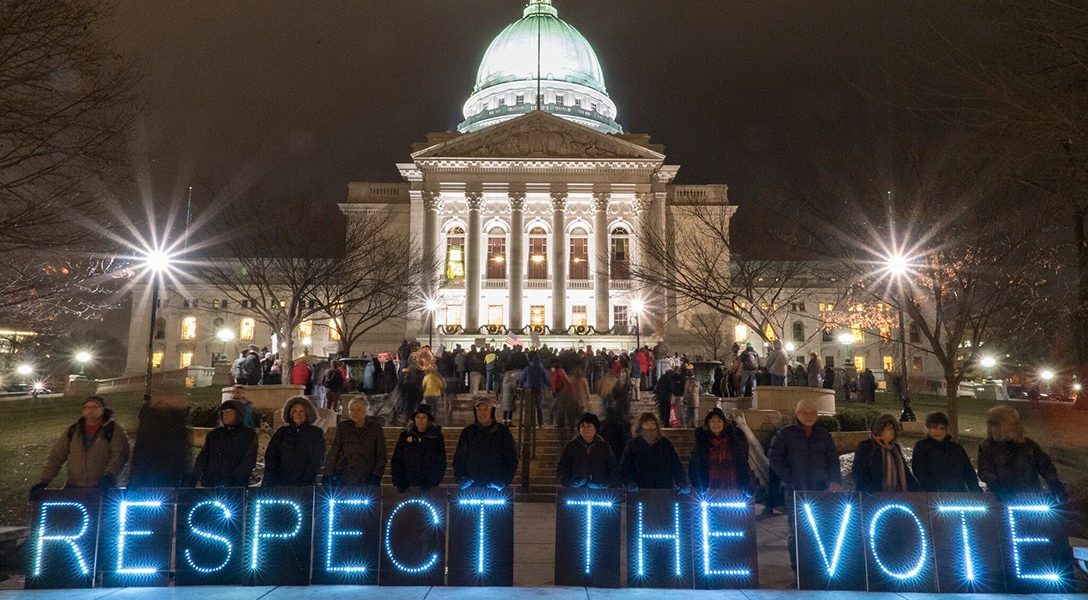 Divided largely along partisan lines, the Wisconsin Supreme Court narrowly rejected President Trump’s bid to overturn the results of the election, paving the way for the state’s electors to cast their votes Monday for President-elect Joe Biden.

The majority opinion in the 4-3 decision was written by conservative Justice Brian Hagedorn, who has become a swing vote in the court. He broke ranks with his conservative colleagues and joined the court’s three liberal justices to dismiss the arguments of the Trump campaign.

Hagedorn said it was “unreasonable in the extreme” for Trump’s lawyers to wait until after the election to challenge the rules under which it was conducted.

“The claims made by the Campaign in this case are not of widespread fraud or serious election improprieties,” he wrote. “At the end of the day, nothing in this case casts any legitimate doubt that the people of Wisconsin lawfully chose Vice President Biden and Senator Harris to be the next leaders of our great country.”

An hour later, Wisconsin electors cast their 10 votes for Biden.

This ruling came three days after the US Supreme Court refused to hear a Texas lawsuit which aimed to throw out all votes in Wisconsin and three other swing states that Biden won.

The Trump campaign, led by lawyer Jim Troupis, sought to nullify 221,000 ballots in two heavily Democratic counties in Wisconsin, even though the same rules for mail-in and early voting were in effect across the state. Troupis challenged everything in Milwaukee and Dane counties, including how they accepted that some voters were “indefinitely confined” and thereby could vote by mail, how the counties handled in-person voters, and the collection of mail ballots at Madison’s two “Democracy in the Park” events in October, as well as how clerks may have helped fill in or correct witness addresses.

“We conclude the Campaign is not entitled to the relief it seeks,” the majority wrote. “The challenge to the indefinitely confined voter ballots is meritless on its face, and the other three categories of ballots challenged fail under the doctrine of laches,” the opinion said, meaning the lawsuit was not filed on time. “The Campaign’s delay in raising these issues was unreasonable in the extreme, and the resulting prejudice to the election officials, other candidates, voters of the affected counties, and to voters statewide, is obvious and immense.”

In her dissent, conservative Justice Annette Ziegler wrote, “The majority states, ‘[t]he time to challenge election policies such as these is not after all ballots in the election have been cast and the votes tallied.’ According to the majority, ‘[s]uch delay in light of these specific challenges is unreasonable.’ The majority misses the mark.”

Wisconsin’s Supreme Court had previously rejected the Trump campaign’s effort to bypass lower courts to have the high court hear the case immediately. It sent the case down to a circuit court, where Reserve Judge Stephen Simanek quickly dismissed every argument.

Judges at the state and federal level spanning the ideological spectrum — including several of Trump’s 200-plus appointees to the nation’s courts — have almost unanimously dismissed Trump’s lawsuits alleging election fraud and procedural issues.

After the circuit court ruling, Trump’s appeal to bypass the appeals court was approved by the Wisconsin Supreme Court, which heard the case in a rare Saturday session of oral arguments.

Trump’s legal team has now almost run out of legal avenues to further contest the election in Wisconsin. A federal judge on Saturday dismissed a separate lawsuit in Wisconsin seeking to overturn the election results, which Trump has appealed, and former Trump lawyer Sidney Powell has appealed to the US Supreme Court to hear a case she had previously lost in the state.

Judges at the state and federal level spanning the ideological spectrum — including several of Trump’s 200-plus appointees to the nation’s courts — have almost unanimously dismissed Trump’s lawsuits alleging election fraud and procedural issues. In his rejection on Saturday of the Wisconsin suit, US District Judge Brett H. Ludwig, appointed by Trump in September, called Trump’s request to reverse his loss “extraordinary” and said the rule of law had been followed.

The majority opinion castigated Trump’s team for only disputing ballots in the two counties, despite the practices in question being in use in all of the state’s 72 counties. On municipal clerks correcting witness addresses, a procedure that has been in place for several years and approved by the Wisconsin Elections Commission, the majority wrote, “The Campaign nonetheless now seeks to strike ballots counted in accordance with that guidance in Milwaukee and Dane Counties, but not those counted in other counties that followed the same guidance. The Campaign offers no reason for waiting years to challenge this approach, much less after this election. None exists.”

In a dissenting opinion, conservative Chief Justice Patience Roggensack said the Milwaukee and Dane County Boards of Canvassers erred when they allowed clerks to correct witness addresses and chose the locations for “Democracy in the Park.”

“The majority does not bother addressing what the boards of canvassers did or should have done, and instead, four members of this court throw the cloak of laches over numerous problems that will be repeated again and again, until this court has the courage to correct them. The electorate expects more of us, and we are capable of providing it. Because we do not, I respectfully dissent,” Roggensack wrote.

The court had been expected to rule on the legality of the Wisconsin Election Commission’s (WEC) procedures that had been under question by the Trump campaign.

But Hagedorn, who was elected with Republican support, affirmed that the WEC was in the right, though he encouraged its commissioners to reexamine some of its orders in accordance with election statutes “to avoid future problems.”

The three other conservative justices echoed concerns held by many Trump supporters that the vote presented “serious legal issues.” Ziegler argued that “the people of Wisconsin deserve an answer — if not for this election, then at least to protect the integrity of elections in the future.”

Although Roggensack had previously said that throwing out the ballots would be an inappropriate remedy, she wrote in her dissent that precedent stated that votes with corrected witness addresses should not have been counted and ballots from “Democracy in the Park” events “did not meet the statutory requirements for lawful absentee voting.” Roggensack did, however, agree with the majority on the “written application” issue and did not address indefinitely confined voters.