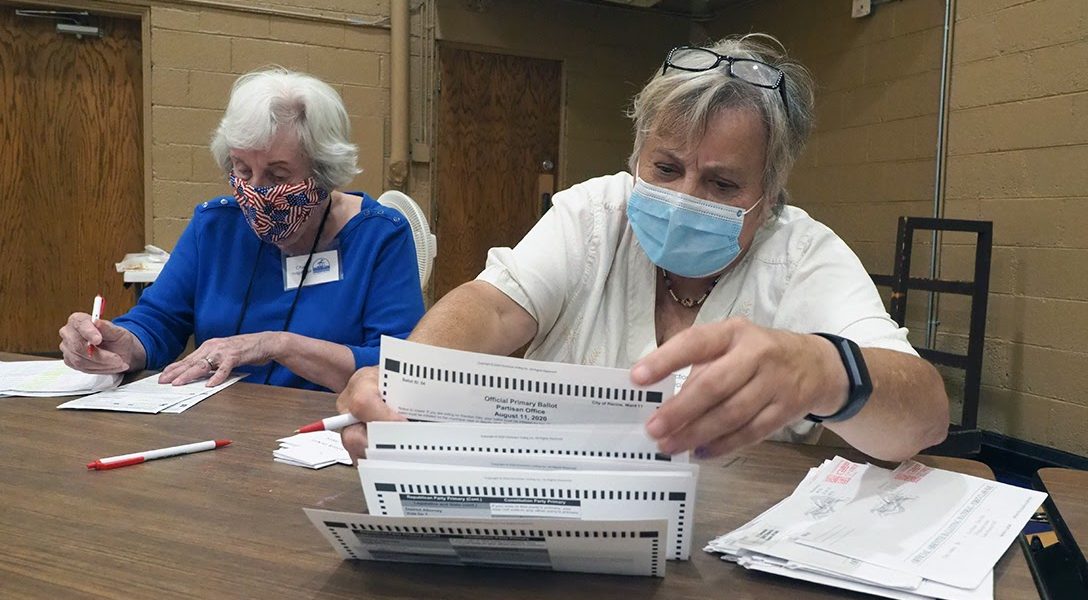 Racine, WI, poll worker Donna Nielsen checks that all fields are filled out properly on an absentee mail-in ballot as Nan Cycenas records the ballot is received. Absentee ballots are opened and counted for the Wisconsin primaries on August 11, 2020. Photo credit: © Sue Dorfman/ZUMA Wire
Elections

Miriam Fleming was horrified by the sight of massive lines of voters, forced to wait for hours, outside Milwaukee’s few open polling places. With the COVID-19 pandemic soaring in early April, Milwaukee had gone from some 180 polling places to just five for the presidential primary. The chaos inspired this Milwaukee County voter to volunteer as a poll worker this fall for the first time.

“I think it’s really important to keep all the polling places open,” said Fleming. “That’s why it’s so important to have poll workers now, to prevent that from happening again and to protect people.”

Election officials and clerks are counting on an unusual assemblage of high school students, millennials, and National Guard members to make sure polling places in Milwaukee and across the battleground state of Wisconsin are open in November as more traditional volunteers stay home.

Municipal clerks say poll workers, whose duties include registering voters, handing out ballots, and processing absentee votes, are essential to ensuring operations run smoothly. Any shortfall in poll workers can snarl the flow of voting, resulting in longer wait times for voters and the consolidation of polling places — both scenarios that could leave some people unable to vote at all. A report by the Brennan Center for Justice found that the consolidation of polling places in Milwaukee reduced turnout in the April 7 primary by 9 percent. Turnout by African Americans was especially suppressed.

Officials managed to have 168 polling sites open in Milwaukee for the local August primaries. Having approximately 30,000 poll workers for November 3 will be crucial in Wisconsin, said Reid Magney, the public information officer for the Wisconsin Elections Commission. The WEC does not yet have data on poll worker recruitment, but Magney said municipalities and counties across the state likely need to recruit over 1,000 more people. Coronavirus, however, is spiking again.

The WEC has issued statements urging people to sign up to be poll workers since mid-March, when the coronavirus pandemic forced the state to adapt to a surge in mail-in voting and a decline in available poll workers. Wisconsin relied on the National Guard to fill the gaps, with over 2,400 serving as poll workers in April and about 700 assisting in the August 11 primary.

Major Joe Trovato, a spokesman for the Wisconsin National Guard, said Guard members wore civilian clothes and “performed all the same duties as traditional poll workers while largely working in the counties in which they reside.”

Poll workers will be in demand again in November, so municipal clerks are broadening their recruiting efforts for this paid position.

“If you are a state, county or municipal employee, a student or someone who is looking for temporary work, municipal clerks need you to make a difference,” WEC Administrator Meagan Wolfe said. Wisconsin law allows any citizen aged 18 or over who is fluent in English and has resided in their district or ward for at least 28 days to serve as a poll worker in any municipality in their county. Sixteen and 17-year-olds enrolled in school with a grade point average of at least 3.0 are also eligible.

Nationwide, the need to recruit poll workers is a “major concern” for Benjamin Hovland, chairman of the US Election Assistance Commission. Over 900,000 poll workers staffed the 2016 election, and this year, despite a likely drop in in-person turnout, the demand will be similar because of absentee voting.

“Most places we’ve talked to are looking for poll workers,” Hovland told WhoWhatWhy. Although “some jurisdictions have enough people,” he said, others “may need thousands more.”

The demographics of poll workers match those most at-risk for COVID-19: they are elderly. Almost 60 percent of poll workers nationwide during the 2018 midterm election were aged 61 years or older, with 27 percent over 70, according to an analysis by the Pew Research Center of the 2018 Election Administration and Voting Survey. Eight out of 10 coronavirus deaths in the US occur among people aged 65 and older, according to the Centers for Disease Control and Prevention (CDC).

For this group, “if your health is compromised, taking a risk is not worth it,” said Diane Coenen, municipal clerk of Oconomowoc, WI.

Hovland said the EAC is working with the CDC to create guidance on ensuring the safety of polling places. He added that $400 million in funding from the CARES Act has been distributed to states to pay for PPE and extra sanitary precautions at polling places.

Much of the difficulty stems from a lack of education — people do not know that being a poll worker is something they can do, Hovland told WhoWhatWhy. He said voters tend to assume the poll workers are employees rather than volunteers from their communities.

To combat this misperception, the EAC held a “National Poll Worker Recruitment Day” on September 1. Hovland said the social media campaign raised awareness of the importance of civic engagement in helping ensure free and fair elections; it had an “overwhelming response.”

Hovland added that the EAC has partnered with the Poll Hero Project, which has so far mobilized over 25,000 high school and college students, and that overall sign-ups have surged since August.

Municipal clerks are also finding their own ways to recruit and retain poll workers. In Greenville, a northeastern Wisconsin town of about 12,000 people, word of mouth and volunteers from civic organizations, such as the local Lions Club, have filled all positions.

All of the clerks are making a backup plan as the pandemic surges in Wisconsin. In Oconomowoc, population 16,800, Coenen knows the average age of her poll workers is roughly 78 to 82 years old. She is putting notices on social media and the city website. If any of her veteran workers stay home this November, she has a list of potential replacements to call.

“The thing about administering an election during this pandemic is you might have enough today and not tomorrow, because people might get sick,” said Greenville Municipal Clerk Wendy Helgeson, who also serves as president of the Wisconsin Municipal Clerks Association. “My expectations are zero every day and I have to adapt every day. I might be fine [now], but how do we know that an outbreak in Greenville won’t happen the week before the election and we lose 20 poll workers?”

Wisconsin’s coronavirus outbreak is spiraling out of control, particularly in its northeastern corner. The number of patients in need of hospitalization and the ICU has more doubled this month, and the state ranks third in cases per capita. The Wisconsin Department of Health Services is recording an average of almost 2,500 new cases per day, three times higher than a month ago, surpassed only by Texas and California in the total number of confirmed cases over the last seven days.

The time commitment required to be a poll worker is often challenging for younger demographic groups who have full-time jobs and may assume they cannot afford to spend a whole or partial day working at the polls. However, Wisconsin requires companies to grant their employees an unpaid leave of absence to work at the polls, and some employers encourage employees to volunteer.

Poll workers are traditionally over 50, and a shortage is expected this year. If you’re in a position to, find out how to be a poll worker or volunteer. You can cover early voting or Election Day. They’re LONG days, but help is needed. pic.twitter.com/Ioxz0Uynhg

As the November election approaches and the pandemic is forecast to worsen, younger generations — which are more diverse, tech-savvy, and at lower risk of serious complications from COVID-19 — will be critical to states’ goals of averting the chaos of earlier primary races.

“Once I started doing poll working and I learned about it, I was kicking myself for not having signed up for it 10 years ago,” said Andrea Singletary, a young poll worker based in Madison. “Younger millennials and Gen-Z are really kind of waking up to the importance of voting, the importance of getting involved locally.

“I really hope that people our age recognize that we are the machinery that makes democracy go. This system only works if we participate to the fullest extent possible and the more involved you get in your community, the better off your community is going to be.”

Power the Polls, an initiative of the Fair Elections Center, is partnering with large retailers and media companies to target ads on platforms that cater to young people, such as Snapchat, to encourage them to become poll workers. Power the Polls hopes that working the polls will inspire these young people to continue civic involvement long after this election.

“I think people are very grateful that we’re making the effort,” Fleming said. “I get maybe one to three people per session who are willing to do it. A lot of people don’t know if they can take the day off or they live with someone who has a preexisting condition and are afraid of the risk.”

Milwaukee has doubled its pay rate for poll workers to $240 a day, and Magney said the city expects to open 170 of its 180 polling places in November.

Although polling place consolidation can often create longer wait times, Madison poll worker Amanda Anderson said the effective triaging of voters can help manage it. Madison monitors how long people are waiting in line to vote. If a bottleneck occurs, the city sends in a “rapid response” team of extra poll workers to shorten wait times.

Ideally, Anderson said, municipalities and counties would have enough workers and polling places to have effective voting in local communities. That means local voting sites remain open so people don’t have to ride a city bus for an hour to reach a polling place or wait in long lines.

“It discourages certain people from voting because they might not have a job or they might not be able to take off an unexpected amount of time,” Anderson said. “They might only have to go on their lunch break and now they’re gonna be in line for three hours. Well, gosh, they have to get back to work, now they’ve lost the ability to cast their vote.”

Election officials believe they have addressed key issues so polling places can remain open in the presidential election. Magney said the number of poll workers “won’t affect the integrity of the process” in November because “Wisconsin has some very strong protections in place both in terms of technology and practical safeguards.”

If recruitment efforts fall short of recruiting enough poll workers, Magney said, the National Guard will step in. The WEC is currently conducting a survey of municipal and county clerks to determine how many poll workers are still needed. By October 15, Magney hopes to use that data to determine how many, if any, National Guard members will be needed to fill the gaps.

“We will find enough poll workers one way or another,” Magney said. “It’s more a question of how many National Guard members we’ll need and … how many poll workers clerks can recruit in the coming weeks.”