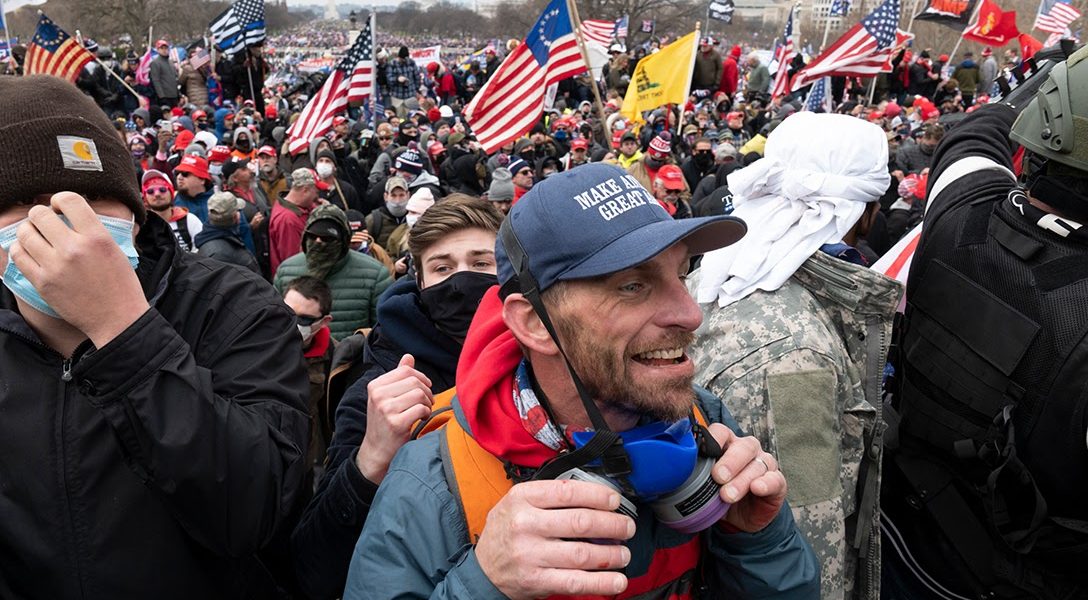 In the days leading up to the attack on the Capitol, Donald Trump had tried to pressure state legislators and officials and even his own vice president, Mike Pence, to overturn the 2020 election and declare him president in spite of the will of the voters.

Trump had also been encouraging his followers to converge on Washington to protest the inevitable congressional certification of the Electoral College vote. The crowds began assembling in the nation’s capital as early as three o’clock in the morning Wednesday. Outside the White House, Trump whipped up the crowd, repeating his false claims that the election had been stolen from him by fraud and vote-rigging. He urged them to march to the Capitol.

Inside the US Senate, Senate Majority Leader Mitch McConnell (R-KY) gave an eloquent plea to respect the election. Senate Democratic leader Chuck Schumer (NY) concurred, saying that Joe Biden’s presidency had already been decided and the reading of electoral votes was little more than a formality. Pennsylvania’s Republican senator, Patrick Toomey, reminded senators that each state decides its own election rules and that all the states had spoken. Congress, he argued, cannot overturn an election.

Although police arrested 20 protesters during the day, many of the Trump supporters strolling on the National Mall initially maintained an almost carnival atmosphere as if this were just another political rally — more like a county fair than a serious protest.

At the same time, however, a more serious crowd began converging on the Capitol. This crowd broke through barricades and began storming the Capitol building itself, finally breaking into the building as Capitol Police retreated.

There was no coordinated federal response because defense of the nation’s capital is directed by the commander in chief, and the president apparently approved of what was taking place.

Congressional staff members were warned that the building was on lockdown and that it was too dangerous to step outside. Senators who had gathered to certify the votes of the Electoral College were forced to retreat to their offices and barricade themselves inside. A protester seated herself in Mike Pence’s chair in the Senate and took a selfie, fist raised in a Trump power salute. Another seated himself in the office of House Speaker Nancy Pelosi (D-CA), and scrawled on a folder that the protesters would not back down. Secret Service officers in plain clothes drew their pistols and held the crowd off while they evacuated Pence from the building. NBC News showed a lone Capitol Police officer trying to hold the crowd back then retreating up a stairway as members of the crowd threatened him.

In contrast to the peaceful Black Lives Matter protest that was met with tear gas and phalanxes of federal law enforcement outside the White House last summer, there was no serious effort to control the crowd. There was no visible show of force and no push to clear the rioters, who smashed windows and climbed all over the Capitol at will and remained for hours. That is because the president was to a large extent the instigator of the insurrection. Rather than calling on the crowds to disperse, Trump initially issued a tweet that did nothing more than ask members of the crowd to show respect for the Capitol Police.

There was no coordinated federal response because defense of the nation’s capital is directed by the commander in chief, and the president apparently approved of what was taking place.

The chaos inevitably recalled the setting fire to the Reichstag building, the home of the German parliament in Berlin, in 1933. The arson, the work of Nazi thugs, was used by Adolph Hitler as a pretext for seizing power in Germany and steering the country towards the catastrophe of World War II.

It is not clear what Trump’s objective was. Despite the seriousness of the situation, and the obvious fear in the eyes of Capitol Police officers, Trump initially remained silent. Finally, President-elect Joe Biden went on television to tell America and the world that democracy was under attack. The images of the Capitol under siege by a mob made that clear. Trump finally tweeted a brief, pre-recorded appearance on camera, repeating that the election had been stolen and that he was the victim of fraud. He asked the protesters to “go home,” praising them as “very special.” Trump repeated that he considered the election to be fraudulent. And that it had been stolen from the people and from him.

Here’s the scary moment when protesters initially got into the building from the first floor and made their way outside Senate chamber. pic.twitter.com/CfVIBsgywK

Observers had expected Trump to stage a final act to head off the final certification of the Electoral College vote. No one had expected a direct assault against Congress.

Many Republicans blamed Trump’s repeated engagement in conspiracy theories about the election for handing this week’s Senate runoff races in Georgia to the Democrats. The mob assault on the Capitol may have a similar effect on future elections.

Sen. Ted Cruz (R-TX) had objected to accepting the electoral votes from Arizona during the largely ceremonial counting of the votes. That kind of protest seemed almost irrelevant after that attack against the Capitol. The most likely result of Trump’s latest maneuver promises to be a quick acceptance of the Electoral College results once the protesters go home. That might finally conclude the tempestuous 2020 election process once and for all. That said, Trump still has nearly two weeks before he is officially out of office. Anything could happen.