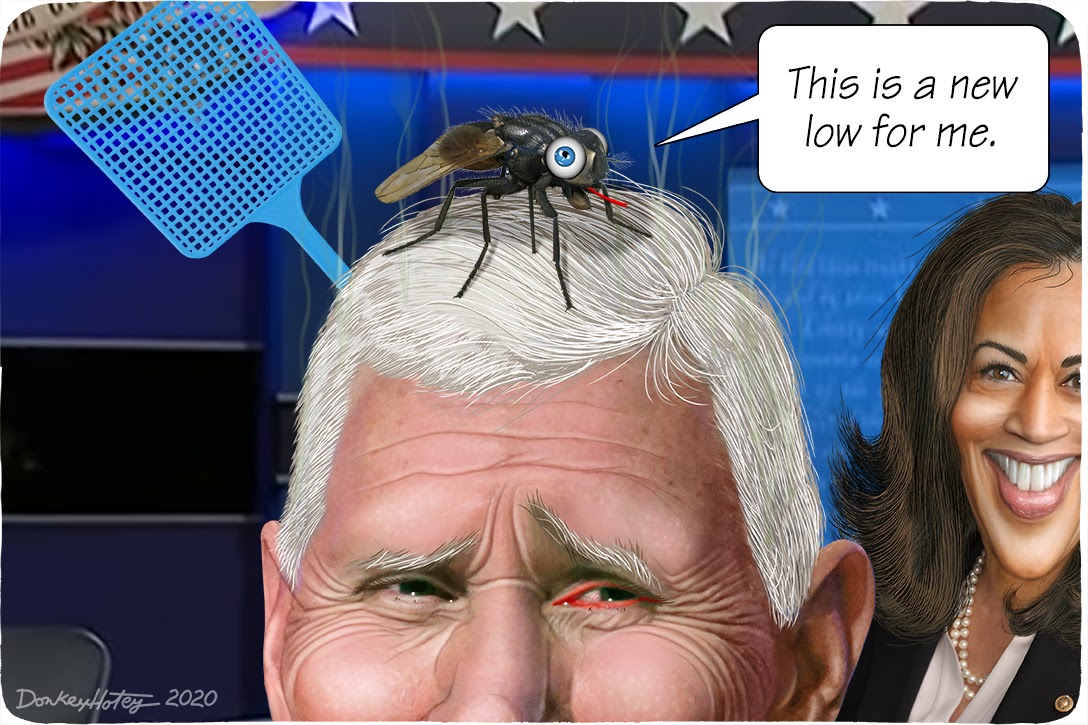 What If? A Deeper Look at the Vice Presidential Debate

It says a lot about where we are now that the most dramatic moment in Wednesday’s vice presidential debate between Kamala Harris and Mike Pence involved a large fly landing on Pence’s snow-white hair and clinging there, immobile, for at least two minutes.

Ironically, that was also the time allotted for a debate response. No one can remember what Pence said, but the fly was a smash success. It not only dominated social media, but it captured headlines in most major US newspapers and swept Europe as well. The Biden campaign immediately offered “Truth Over Flies” fly swatters for sale online. They sold out within a few hours. In the other successful retort of the evening, a smilingly demure Harris stopped the umpteenth interruption from a mansplaining Pence by firmly announcing: “I’m speaking.” T-shirts with the slogan immediately appeared online.

It would be easy to dismiss all this as trivial. After all, who really cares about a vice presidential debate? But this debate could very well turn out to be a preview of our future president. Donald Trump is still recovering from a nasty attack of the coronavirus, and at 74 years old, he is no spring chicken. He does not look or sound good, and he is acting increasingly unhinged.

Joe Biden will be 78 in November and looks distressingly frail. It’s one thing to scoff at age and observe that today’s 60 is yesterday’s 40. Nevertheless, when you start closing in on 80, though you may think you are still a teenager, the fact is that you are inching towards the end of your biological tether. Many political pundits considered “No Drama” Barack Obama to be a bit young when he ran for president in 2008. By the time Obama had finished his second term, he was still only 55, but he now had gray hair. Serving as president is an exhausting experience. Given the health status of the two presidential candidates, Kamala Harris or Mike Pence could very well be our future president.

Seen from that perspective, what did the debate actually show us? Harris is known as an aggressive prosecutor and a no-nonsense California state attorney general, and she is currently one of the sharpest speakers in the US Senate. Her mission, which she handled masterfully, was to tone down her personal ambition and to focus on promoting Biden, whose election victory is her only viable path to the presidency. For his part, Pence, clearly more comfortable as a loyal sidekick, bragged that Trump had given him his marching orders: “Get yourself to Salt Lake,” the site of the debate. What we got was a surrogate for Trump in a slightly more palatable format. Pence is essentially Donald Trump’s version of mini-me.

Pence’s overarching problem going into the debate was that Trump had put him in command of the national campaign against the COVID-19 pandemic and some 211,000 Americans had subsequently died. Not a great record.

While Harris deftly walked a tightrope that involved keeping Pence at bay while not giving misogynists an excuse for dismissing her as an emasculating harpy, Pence managed a low-energy presentation that stood in sharp contrast to the president’s catastrophically manic first debate. Instead of frenzied bluster, Pence spoke in neutral tones clearly intended to convey reason and calm. The fact that Pence began his career as a radio talk show host was in evidence here. The tone was different; however, the message was the same. Like many talk show hosts, Pence’s arguments are only as good as the writer who scripts them. In this case, Pence’s talking points constituted an impossible mission. Essentially, he had to defend the indefensible.

Pence’s overarching problem going into the debate was that Trump put him in command of the national campaign against the COVID-19 pandemic and some 211,000 Americans subsequently died. Not a great record. The US, in fact, has suffered a coronavirus casualty rate that surpasses virtually every other developed country in the world. That’s pretty hard to defend. To make matters worse, and against the advice of America’s leading scientists, Pence had essentially hibernated while the White House slowly turned itself into a lethal virus hot zone. The president, much of his staff, and the joint chief of staff were all quarantined mostly because they had listened to a president who refused to listen.

Through much of Pence’s attempts to portray COVID-19 as not really that bad an experience once you got used to it, Harris simply smiled. She didn’t need to go into the details. Pence was perfectly capable of hanging himself.

Asked why the national response had failed to stop the pandemic, Pence responded that it was all the fault of the evil Chinese. The president had immediately stopped all flights to and from China, and in any case 200,000 deaths are less than the millions that might have died if the pandemic had involved the swine flu instead of COVID-19. The bottom line: COVID-19 was a wake-up call, but one that Pence was determined to ignore.

Harris could have pointed out that the variation of the coronavirus that has been ravaging the US actually came from Europe — not China — and that far from stopping all flights from China, Trump had merely barred Chinese citizens from entering the country, while allowing US citizens and permanent residents to fly back and forth.

The truth is that most people already know the facts. There was really no need for Harris to repeat them. What viewers really expected from the debate was a chance to size up both candidates. The trick was to skip the details of what was said and to look at the general patterns that each candidate used in formulating his or her response.

In Pence’s case, the first approach was a classical attempt to equate respect for the office of the presidency — and, consequently, Trump — with patriotism. Criticize Trump and you are attacking the US. Pence accused Harris of unpatriotically undercutting the administration’s honest efforts to make America great.

Pence clearly had a hard time selling that one since Trump, after promising to “drain the swamp,” has spent the last three years dismembering the federal government. In the process, his administration has cut the heart out of the US State Department, trashed America’s intelligence agencies, dismantled the EPA, packed the justice system with incompetent and politically biased judges, chosen an attorney general who is little more than a robotic factotum, alienated nearly all of America’s allies, and gleefully violated one American tradition after another. If a law existed to guarantee clean air, protect clean water, or slow the acceleration of climate change, Trump either erased it or rendered it impotent by issuing an executive decree. It is a hard act to follow or forget.

Pence, nevertheless, gave it a heroic try. He boldly tossed out statements that he knows are patently false. He didn’t care. Like Trump, he blithely ignored the strict time limits to which he had agreed for the debate. The original question was immediately forgotten. Like Trump, Pence dipped into what seemed to be an alternate reality. Any idiot could see that the president had screwed up; Pence, resorting to time-honored plausible deniability, simply insisted that the president is doing a great job. The rhetorical tactic, promoted by European fascists in the middle of the last century, is known as “the Big Lie.” Like Trump, Pence produced so many of them that it was difficult to keep track. Joseph Goebbels would have been proud.

Pence’s final tactic involved a subtle dose of male chauvinism: If he couldn’t intimidate Harris, he could at least humiliate the debate’s female moderator by totally ignoring her. Chris Wallace was criticized for not controlling an uncontrollable Trump, but the fact is that Wallace did all he could without getting to his feet and physically throttling Trump or at least yanking out the cable to Trump’s microphone. That kind of forceful control was obviously beyond Susan Page, the moderator of the second debate. As Pence, time after time, simply ignored time limits in order to run through his talking points, it never occurred to Page to tell the rambling vice president to stop, or failing that, to shut up. Her method for getting Pence to stick to the debate’s rigid time limits was to say “Thank you!” emphatically. When Pence ignored her and insisted on rattling on, she repeated herself with slightly more intensity. Finally, she gave up.

Page obviously expected Pence to play by the rules, and Pence had no intention of doing so. In contrast to Trump, Pence never raised his voice. That was a relief, but he was clearly presenting himself as the quietly dominant male who puts a weaker female in her place. The message: This world is still run by men, in fact, mainly white men. It’s a message that appeals to Trump’s core supporters.

Harris, unflappable and smiling sweetly, provided proof that the tactic no longer works.

In fairness to Page, a Washington bureau chief for USA Today, the real culprit was the format for the debate. Instead of a real debate, we were treated to a series of alternating political infomercials. Page rarely put the same question to both candidates so that answers could be compared, and she rarely gave either candidate enough time to express an idea coherently. There were no follow up questions. Instead, she insisted on going through her prepared checklist of questions, paying little or no attention to the answers. She had obviously hoped to cover too many topics given the limited time frame. The other villain in the story is the Commission on Presidential Debates, which agreed to a formula designed to suit an audience with the attention span of a gnat.

All that is a bit technical. What the debate actually did reveal, despite its inherent flaws, is the divide that characterizes the issues in this election. Harris is not just an extremely competent former prosecutor, but she is also symbolic of the demographic shift towards diversity that increasingly characterizes the real America.

For his part, Pence came across as yet another broadcast personality dipping into politics.

If Trump is a former reality TV personality boosted to the presidency, Pence is a former radio talk show host boosted to the vice presidency (after six terms in Congress and four years as governor of Indiana). Both men are firmly rooted in a 19th century, mostly white, America. It is a segment of American society that is increasingly faced with obsolescence in a more and more globalized world. Like most broadcast personalities, both Trump and Pence can superficially appear to be impressive if you don’t really pay attention to the substance of what they say and do. The substance depends largely on the script, or in this case, talking points that someone prepares for them.

In contrast, Harris is a genuine product of America’s new reality. She is not undercutting America, she is America. She or Pence could very well become our future president. The election this November 3 will decide whose vision of America we will finally have to live with.