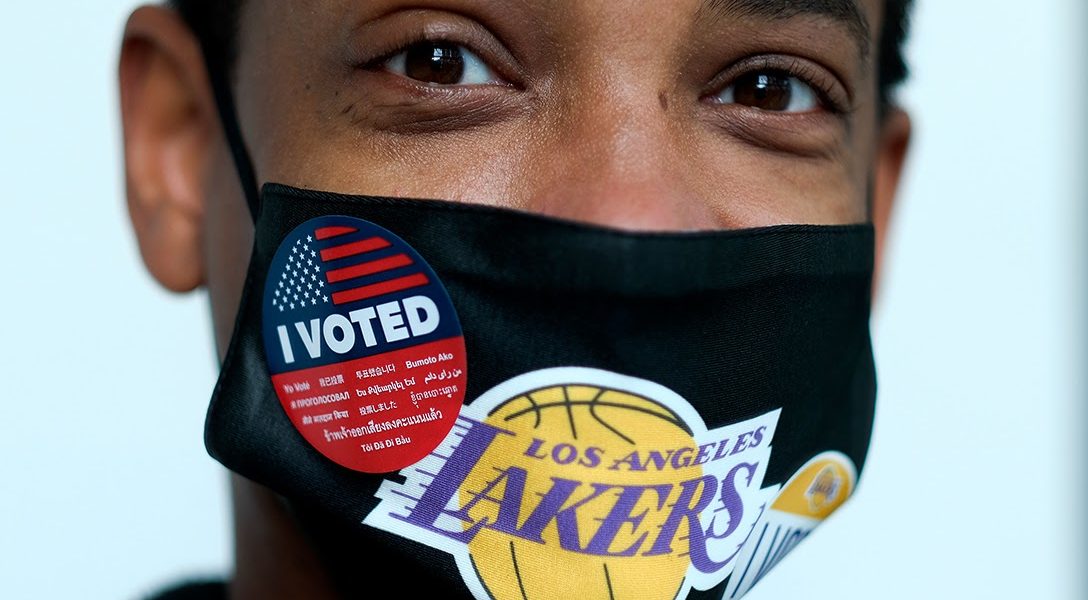 A voter wears an "I Voted" sticker on his Lakers face mask after casting his ballot at Staples Center in Los Angeles, on October 24, 2020. Photo credit: © Ringo Chiu/ZUMA Wire
Elections

“Are you here to vote?” Arianna asked two men and a woman approaching the basement entrance to the Hollywood Hotel’s ballroom in Los Angeles. “Just go in and make a right. Tell them if you’re dropping off your ballot so you don’t have to wait.” In less than 15 minutes, the three voters strode back out of the doorway and up the steps to the street, “I Voted” stickers on display.

“There really are so many ways to safely vote here in LA County,” Arianna, a 30-year-old poll volunteer, told WhoWhatWhy. “In my opinion, there really is no good excuse to not get out there and exercise your right to vote.”

Not all Americans have it so easy. In the last 10 years, half of the states have actually made it harder for their citizens to vote, according to a study by the Brennan Center for Justice, a nonpartisan law and policy institute. They’ve enacted stricter ID laws, created registration hurdles, and limited early voting and mail-in voting. Sixteen states still require an excuse — such as a medical issue or absence from the precinct — to vote by mail. Five of those, including Texas and Indiana, do not recognize the fear of contracting COVID-19 as a valid reason to vote from home. Some studies indicate that Mississippi voters have the hardest time of all: They can’t vote early in person, they can vote by mail only if disabled or away from their home precinct, they can’t register online, and if they register by mail they have to do it at least a month before elections.

By contrast, California has expanded its already inclusive voting policies to acknowledge difficulties caused by the pandemic. As a result, its voting practices could serve as a model for the rest of the US.

Here’s How to Vote the California Way

Mail-in voting. All registered Californians can vote by mail without an excuse, whether they post their ballot or use a drop box. Beginning in 2001, the state introduced a permanent vote-by-mail registry now used by close to 60 percent of the state’s voters. In 2018, more than 8.3 million Californians, nearly 66 percent of the total, voted by mail. Nationwide, just 24 percent did so.

This year, as a public-safety measure, all California voters received a vote-by-mail ballot, which they’ve been able to mail in or drop off since October 5.

“I think that California has made casting vote-by-mail ballots very accessible to voters in ways that other states do not,” said Kim Alexander, president of the California Voter Foundation, a nonprofit organization dedicated to improving the election process for voters. “I appreciate that our governor and legislature and secretary of state all moved very quickly and early to come up with a plan. The counties have known since June about both safe voting and in-person voting, so I think it was the right decision to mail everyone a ballot and give voters those options.” “Safe voting” California-style includes not only allowing all voters to mail in their ballot, but letting them skip lines by leaving the ballot at any polling center in the state.

There is little evidence to support some critics’ claim that mail-in voting leads to widespread fraud. An analysis of three vote-by-mail states showed that in 2016 and 2018 there were 372 instances of potential voter fraud out of about 14.6 million votes cast — fewer than 0.0025 percent.

A more valid concern is that legitimate mail-in ballots have been rejected. California’s mail-in ballot rejection rate is 1.7 percent, half a percent higher than the national average. According to a study conducted by the California Voter Foundation in three counties, the main reasons for rejection in 2018 were failure to sign the ballot, a signature that didn’t match the one in a Department of Motor Vehicles or voter registration file, and a ballot that was postmarked or received more than three days after the election.

Ballot curing. As a result of a 2018 ACLU lawsuit against the state, all of California’s counties must notify voters when their ballot has been rejected for a mismatched signature. Voters can then “cure” their ballot by providing an updated signature — by mail, electronically, or in person — to an election official who compares signatures and accepts or rejects the ballot. Similarly, voters who forget to sign their ballot can correct the matter by providing a signature.

California voters can verify their signature until two days before the 30-day deadline that states have to certify their election numbers. If they fail to sign their ballot envelope, they have until eight days after the election to submit an unsigned ballot statement. Only one other state, New Jersey, is as lenient. Thirteen other states have shorter deadlines for curing, and 35 states allow no curing at all.

According to the California Voter Foundation study, 54 percent of ballots rejected for a signature problem were cured, resulting in thousands more votes being counted.

A wide timeframe. This year, California expanded the window for receiving ballots. Although ballots still have to be postmarked by November 3, they’ll now count if received up to 17 days after the election.

Kim Alexander’s greatest concern is that ballots won’t be postmarked in time. The most common reason for rejection in the ballots she and her team studied was a postmark the day after the election. She believes that many voters placed ballots in mailboxes on election day but they weren’t collected until the next day.

Easy registration. California automatically registers all eligible voters who use the DMV to get a license or ID card or to change their address, unless the voter specifically opts out of registration. This measure has helped California increase its percentage of registered voters nearly 10 percent in the two years since its implementation.

Early voting. As a public safety measure during the pandemic, counties in California may extend the normal three-day, early in-person voting period anywhere from four to 11 days. Los Angeles County, the state’s most populous, allows the full 11 days.

Voting locations statewide have also provided special accommodations for voters who refuse to wear masks but would like to vote in person. California guidelines require polling locations to be spacious enough to ensure social distancing, so voting occurs in stadiums, auditoriums, and even hotel ballrooms.

Easier voting translates to higher turnout, more counted ballots, and possibly changes in results. The 2016 presidential election was decided by thin margins in Michigan, Pennsylvania, and Wisconsin — two of these states saw more rejected ballots in the 2020 primaries than the margin of Trump’s victory four years ago.

Nonprofit Vote, an organization dedicated to informing and engaging voters, released a report on the 2018 election indicating that states with same-day registration, automatic vote-by-mail options, and automatic voter registration (via the DMV or another state office) were among the top 10 in voter turnout per capita. States without those perks and with stricter registration and early voting deadlines were in the bottom 10.

In the last three presidential elections, California has averaged nearly 58 percent turnout, slightly higher than the national average of 56 percent, and about 13 percent higher than Texas, which doesn’t allow same-day registration or no-excuse vote by mail. (Oregon, the state with the longest history of voting by mail, averaged almost 83 percent turnout in the last three presidential elections.)

The California way isn’t perfect. Alexander said she would stop short of holding the state’s system as a complete template for the rest of the US because of the misunderstanding surrounding a state law enacted in 2016 that allows a third party to deliver ballots to an official drop box. This policy, sometimes called “ballot harvesting,” caused controversy in early October when the California GOP set up unofficial drop boxes in churches, gun stores, and campaign headquarters in several counties. California GOP officials — who have criticized the law as a scheme by the left to secure more votes — claimed that they were simply implementing the same strategies as Democrats who recruited volunteers to collect ballots in 2018.

The 2016 law requires that ballot collectors sign the outside of the ballot envelope and indicate their relationship to the voter, but a provision in 2018 created a loophole, saying ballots couldn’t be disqualified simply because the collector failed to sign the outside. Many of the envelopes in unattended drop boxes weren’t signed.

In mid-October, California Secretary of State Alex Padilla ordered the drop boxes be removed, arguing that they didn’t comply with safety measures to ensure that boxes are checked regularly and designed securely, and that an “official” label on some boxes was misleading because voters wouldn’t know that they were in fact giving their ballots to volunteers.

That said, Alexander thinks that the state is doing a lot right. “Important allowances are given to Californians,” she said, “that other voters in other states don’t enjoy.”

Back outside the Hollywood Hotel, voters like Anaise Schindler, 29, appreciate the efforts that the state has made to facilitate voting. “It was super seamless and really safe,” she said. “It was a really easy, pleasant experience. Especially in this election where everything seems so crazy, it’s nice to know that there is an effort to make it easier to vote. I hope that more people vote because of it.”

Have a tip for our election integrity news desk about voting issues? Send us an email: Election Integrity Desk.