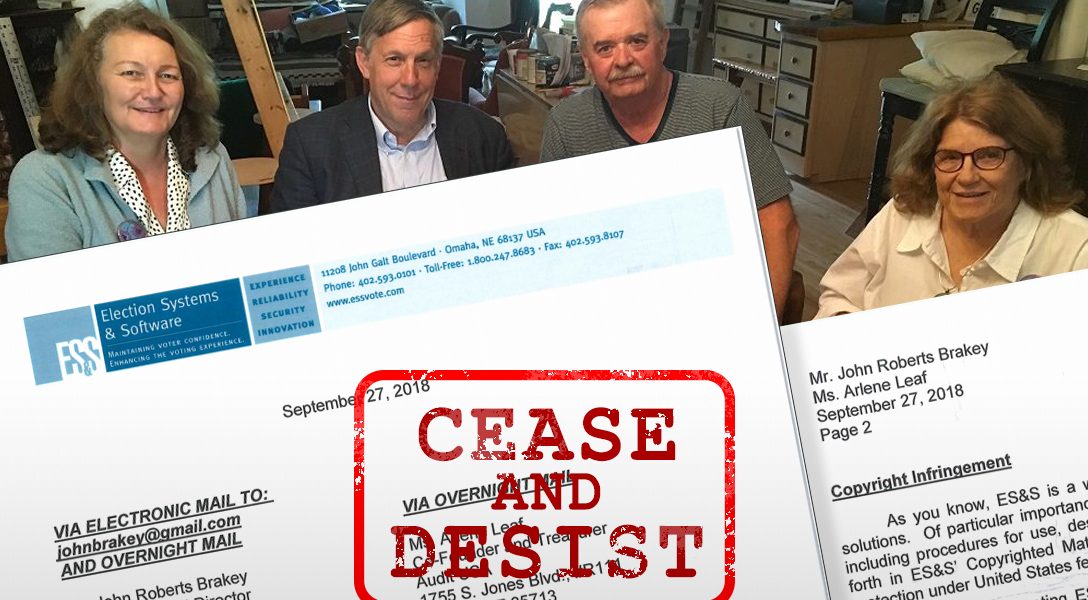 An Arizona-based election transparency activist group has received a cease-and-desist letter from the largest voting-system vendor in the US.

Election Systems & Software (ES&S) sent its letter threatening to file a lawsuit against Americans United for Democracy, Integrity and Transparency in Elections (AUDIT-USA) this week.

“We’re going to reply very respectfully because they deserve that,” said John Brakey, director of AUDIT-USA. “But, we don’t take their trying to intimidate us very seriously, so basically they don’t need to wait 10 days to sue us. They can just go ahead and sue us.”

In the cease-and-desist letter, ES&S claims that the nonprofit has used materials belonging to the voting machine manufacturer, and that is a violation of copyright law.

However, Brakey argued that he was able to come into possession of ES&S product manuals through public record requests or through secretary of state offices in the country and that the bottom line is that ES&S does not want him, or anyone in the public, to have access to these manuals.

“We know what the laws are. We know that we have the right to these manuals. You know where I got them? I got them through records request,” Brakey said. “It’s a fair usage, and it’s for the public good.”

Brakey told WhoWhatWhy that AUDIT-USA has had issues with ES&S in the past regarding the sharing of product information about the voting machine company with the public. However, he added that the threat of legal action would not deter him or his group.

“We are being effective, and we’re getting people to ask questions about how their election system is working,” Brakey said.

One of the main motives Brakey has for sharing information about voting machines through the manuals is to inspire voters. He wants to prove that it’s possible to make elections transparent and accessible to US citizens.

“[In 2016] if ‘not voting’ was a presidential candidate, it won by a landslide — by 34 percent,” Brakey said. “Our democracy is in trouble because people are not voting anymore. I know a lot of people who don’t vote because they don’t believe it works. I’m trying to prove to people that elections do.”

The current threat the nonprofit has received has not stopped the organization from following its mission’s goal. Brakey and AUDIT-USA continue to publicly share concerns about state election departments around the country that destroy election ballot images. These digital images, under the law, are supposed to be saved for 22 months.

“We have a responsibility in our organization to help people understand how elections work,” he added. “And we are working hard … to make elections transparent, trackable and publicly verified, and that’s our mission.”