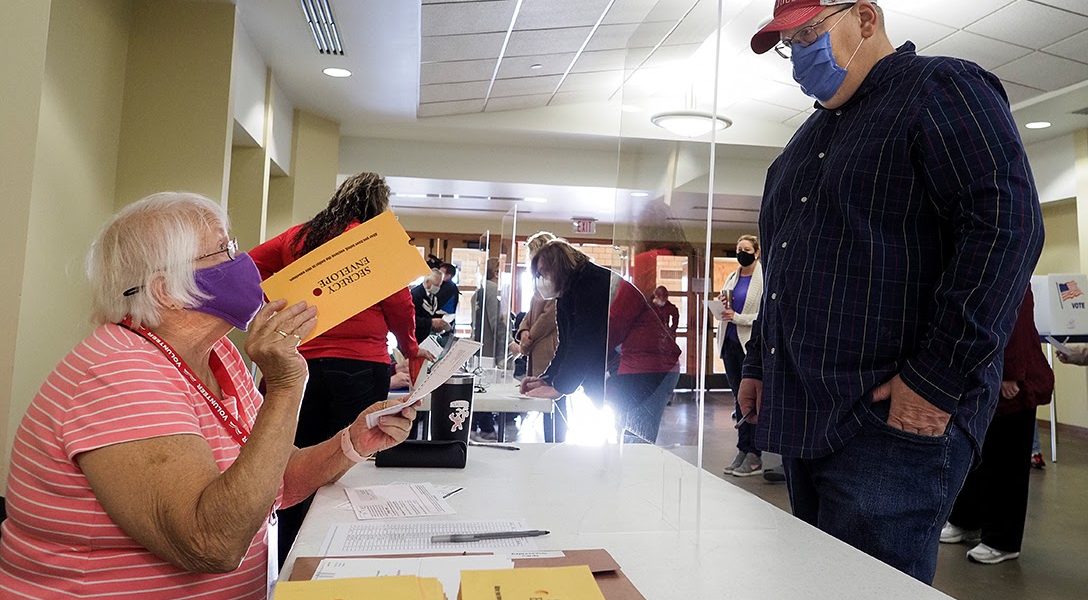 Voters across Iowa are navigating a gauntlet of voting restrictions (read: suppression) in this battleground state, from the rejection of ballots prefilled with their basic personal information to expanded voter ID laws, a limit on drop box locations, and the closure of more than 250 polling locations due to COVID-19.

Nevertheless, they are persisting and have already cast more than 783,000 ballots, some 130,000 more than four years ago with days yet to go. This even though some 156,000 absentee ballot requests were rejected because officials in three counties prefilled them with voter information to make it easier for voters to avoid mistakes.

The dispute over absentee ballots goes back to mid-June, when the Republican-controlled state Legislature rushed through a litany of new laws on the final day of a pandemic-shortened legislative session. In addition to beefing up restrictive voter ID laws, the Legislature required that county auditors contact voters about incomplete or missing information on their ballot requests rather than just fix them.

Iowa Secretary of State Paul Pate, a Republican, then issued a directive going a step further — barring county officials from just prefilling the ballots. Officials in three counties challenged his authority and decided to go ahead and fill in the requested ballots with voter names, birth dates, addresses, and voter ID numbers culled from the state’s voter registration database. This didn’t sit well with Pate and his fellow Republicans, who ultimately were successful in blocking the move in the state Supreme Court, but only after many voters had already gotten the prefilled ballots. Those voters were told they had to request new ballots if they wanted to vote absentee.

For those whose requests were rejected, the cry for change in the election process is even louder than before. Such is the case for social worker and Iowa Democrat Rebekka Kirkland.

“For the longest time I didn’t even know my request form was rejected,” Kirkland said. “By the time I was sent a new one, it was unlikely I could return it and get my absentee ballot in time. But voting is very important to me, so I made it happen. It was a huge, unnecessary hassle but I did it.”

Kirkland worries that few may share her passion for voting, and is worried that some may just give up trying to vote this year. Several thousand people gathered on the grounds of the Iowa State Capitol for the second annual edition of the Women’s March on January 20, 2018. Photo credit: Phil Roeder / Flickr (CC BY 2.0)

Iowans like Tyrell Huff, a senior at Drake University, fall into this category. Huff has never been very active in politics and only voted this year because one of his roommates had “pestered” him to do so for months.

“The four of us each requested an absentee ballot and weeks went by without us hearing anything,” Huff recalled. “It wasn’t until mid-October we learned our ballots had been rejected.”

Huff continued, “My politically active roommate sent in a new [ballot request], but the rest of us were too focused on school that we didn’t want to put our time and energy into something that was clearly going to be more effort than it was worth.”

Even some Republican voters question why officials went in this direction in Iowa, which has used prefilled absentee ballots in past elections without issue — including during the June 2 primary.

Ana Wójcik is a Trump supporter but says having prefilled information saves Iowans time and prevents confusion when filing their request forms. “It’s a similar process to voting in person, so there is no additional difficulty,” Wójcik said.

Fellow Republican George Connelly sees the court rulings on the matter as just adding more confusion to a list of confusing things that have happened in this election.

Connelly agrees with Wójcik that absentee ballots are helpful, but he sees the real problem being “bad governance and public administration” rather than malicious electoral chicanery. “The job of a government is to lead their citizens through confusing and critical moments, not succumb to confusion themselves,” he said.

Connelly submitted his absentee ballot three weeks ago with no issue but still believes changes need to be made.

The fight over absentee ballots is far from the only election battle in Iowa. Pate, who as secretary of state is also the Iowa elections commissioner, initially decided that there would be no drop boxes for absentee ballots in the state. Then he reconsidered and agreed to let counties have them as long as they only were available in or outside the offices of county auditors. Voting-rights groups challenged this in court, arguing in favor of having more sites available to make it easier for voters to get to a drop box. But the state Supreme Court again sided with Pate and state Republicans.

This all comes against the backdrop of a coronavirus pandemic that once again is spiking in Iowa and forcing the closure of polling sites. NPR reports that Iowa now has 261 fewer polling sites than it did in 2016, and that this impacts nearly one-third of registered voters in the state, many of them in urban areas who tend to vote Democratic. While some counties have been able to keep all of their sites open, some have been forced to close or consolidate half of their sites, NPR reported. Among them is Linn County, which happens to be one of the counties that sent out prefilled absentee ballots in defiance of the secretary of state. Officials in Linn say they’ve now closed 37 percent of their polling sites for election day.