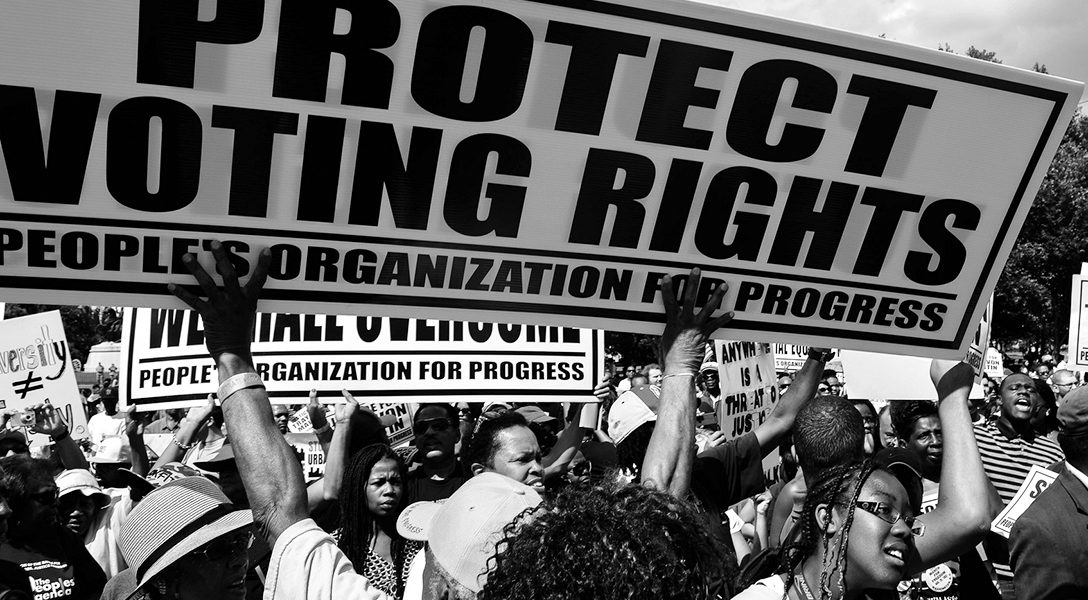 Hundreds of thousands of US citizens have already lost — or could still lose — their right to vote as a result of schemes put in place by Republican lawmakers in states they control. These Americans are not criminals and have committed no offense. The only thing they did “wrong” was to have a name that includes punctuation or a special character like an accent, or to share their first and last name and birthday with someone in another state, even though it can be proven that they are two different people.

In Georgia, a law ostensibly meant to clean up voter rolls ended up in tens of thousands of registrations being purged. Not surprisingly, the law affected minorities disproportionately. The state is now forced to make amends.

Following a lawsuit filed by the NAACP, Georgia recently agreed to correct its voter registration verification system, restoring the registration of over 42,000 purged voters in the process. It is a major victory for voter access. However, the case also illustrates that states that put in place voter suppression laws are not reversing them without a fight.

“This settlement brings an end to Georgia’s onerous exact match requirement and instills important protections for voters in our state,” said Helen Butler, executive director of the Georgia Coalition for the Peoples’ Agenda.

“Voters deserve an election system that enables participation, not one that creates barriers and forces voters to jump through unnecessary hoops.”

The settlement addresses the way Georgia implemented the Help America Vote Act of 2002 (HAVA). Created to deal with the problems exposed in the 2000 presidential election, the act was intended to streamline voting efficiency. This would make the states — instead of disjointed local voting districts — responsible for voting integrity, alleviating the burdens of outdated systems.

However, the law also empowered states to disenfranchise voters.

Nevertheless, elected officials continue to  use the unproven allegation of voter fraud to purge the voter rolls.

“The fundamental right to vote should never hinge on data entry errors and technicalities. Our systems can and must do better,” Danielle Lang, deputy director of Voting Rights at the Campaign Legal Center, told WhoWhatWhy.

The Importance of a Name

In 2013 and 2014, Georgia’s Secretary of State Brian Kemp’s office implemented a rule that required character-to-character exact matching with state databases for voter registrations. According to HAVA, a state must confirm the identity of new registrants through either an acceptable form of identification or the last four digits of the voter’s social security number and through a name match with a state government database. Kemp’s office chose to take this requirement literally. In doing so, however, Georgia failed to take into account the cultural sensibilities of ethnic names. Many African-American and Latino names bear pronunciation punctuation, which may or may not be recognized by different databases. Accent marks, tildes, apostrophes, and hyphens tend to be essential parts of such names, but if a government database can only utilize alphanumeric characters, it will truncate the punctuation. In an exact match, this would represent two different names — and lead to the application being disallowed an excludable case.

This “exact match” led to the denial of 34,874 registration applications, with approximately 22,189 of these being from Black applicants.

Prior to the 2016 election, Kemp agreed to suspend the “exact match” rule. The settlement announced earlier this month— which Kemp’s office consented and contributed to, despite the secretary’s previous opposition — will allow registrants that fail an “exact match” to receive a “pending” status, allowing them to vote upon presentation of a valid ID at the polling place.

The Georgia settlement addresses a key component of Kemp’s plan to “promote Georgia election accessibility.” As reported by the Atlanta Journal-Constitution, Kemp’s plan was the latest in a four-year initiative that required voters to prove their residency to the court or lose access to the vote. The paper also cited cases where registration applications were rejected without explanation.

The state was also accused of moving polling places from minority neighborhoods and using failure to respond to “confirmation of address” notices as justification for removing voters from the registration rolls.

This corresponded with a nationwide effort by Republicans to curb voting rights in potential swing states. With the majority of those affected by these changes Asian, African-American, Latino, poor, homeless, and young — principal voting demographics for the Democrats — these changes appear to be an attempt to “tilt the playing field” in light of population shifts. The consequences of this is enough to swing an election. Earlier this month, for example, the Georgia branch of the NAACP and Common Cause accused the state of purging over 370,000 voters due to “failure to vote” — in violation of the National Voter Registration Act.

This has created pushback from Kemp’s office, which argued that the criticism of the accessibility plan is just an unwarranted liberal attack. The plan was pre-cleared by the US Department of Justice in 2010.

While voter-roll maintenance is arguably necessary for efficient management of voting systems, this can be easily corrupted towards hurting voters — even by well-intentioned but shortsighted legislators.

“This case reflects the difficulties that lie in cultural insensitivity,” Lang told WhoWhatWhy. “While it can’t be said that the politicians involved in the creation of Georgia’s rule had noble intentions in mind or not, it is clear that this problem could have been avoided by an increased understanding of the minority communities.”

A case in point is Indiana. In January, Common Cause and Project Vote petitioned State Senator Greg Walker to reconsider his omnibus bill, SB 442. The bill calls on the state to use the controversial Interstate Crosscheck program to vet the state’s voter list by comparing voters’ first and last names and date of birth to other states’ voters’ rolls. As famously demonstrated in 2006, when a match to the Social Security Death Index Death Record led to Florida Governor Rick Scott being purged from his own state’s voter roll prior to taking office, using only three points of identification will lead to numerous false positives.

As the bill is currently written, it violates the NRVA’s procedures for removing voters from the rolls. The Republican Party is poised to use the program to create similar laws in Ohio, North Carolina, and Virginia. In total, the number of voters disenfranchised by the program could exceed one million, with many of the names on the program list lacking middle name or suffix matches or social security number verification.

“Often it’s an administrative or technical issue,” said David Becker, the director of elections initiatives at the Pew Center for Charitable Trusts. “People are not deliberately trying to remove people. They have a very hard job. They have a legitimate interest to make sure we are not spending taxpayer money to send information to people who are not voters.”

The Georgia case, as well as others throughout the country, show that the right to vote is under assault — often as the result of measures supposedly to preserve the integrity of the election. While over the past eight years, voting rights activists could count on the assistance of the Department of Justice, it is unclear — and even doubtful — whether the Trump administration and DOJ under Attorney General Jeff Sessions will also stand on the side of voters.

That means the burden to protect the right to vote will increasingly fall on advocacy groups, the media and the courts.

“This settlement is an important recognition that as sacred as the vote may be in democracy; the vote cannot protect itself,” said Francys Johnson, president of the Georgia branch of the NAACP.  “This is not the work of government alone. It takes a vigilance from engaged citizens to protect and defend our fundamental values. These reforms at the heart of this settlement are strong indications that our democracy works.”