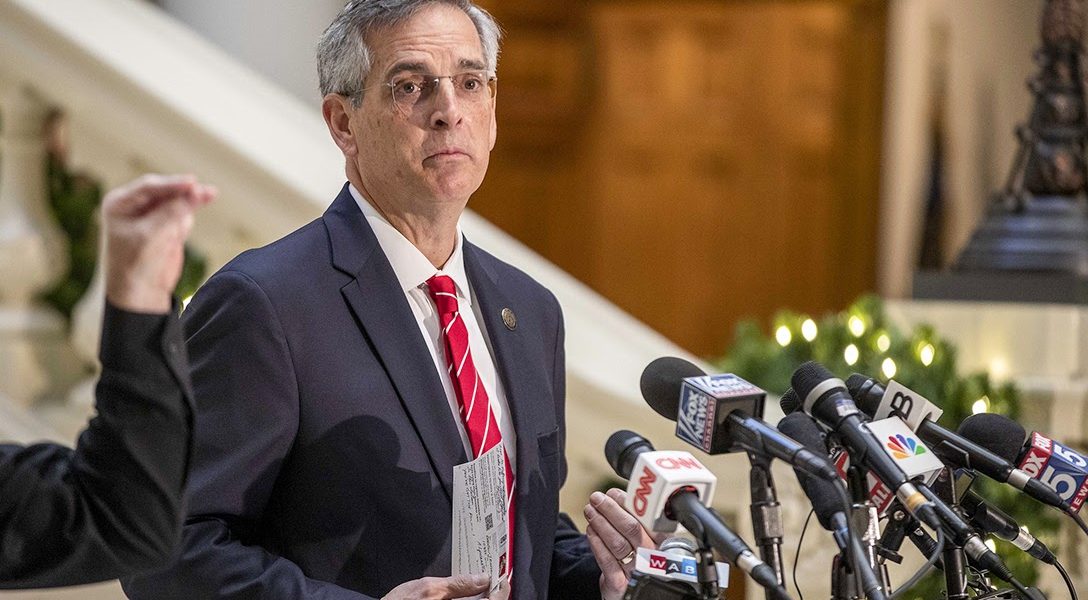 Georgia Secretary of State Brad Raffensperger shows off voter registration postcards that were sent to his deceased son as he makes remarks during a press conference at the Georgia State Capitol building in Atlanta on December 2, 2020. Photo credit: © TNS via ZUMA Wire
Elections

In Georgia, grassroots organizers have been working nonstop for months, if not years. Unlike elsewhere, where voting-rights groups could take a deep breath after Election Day, activists here are continuing to keep on keeping on with both of the state’s Senate seats up for grabs in January runoffs.

“I think the only thing that’s changed is that we have the national attention,” said Michelle Wilson, the senior program manager for “We Vote, We Rise” at the group Women Engaged.

To say that Georgia is the center of national political attention is to put it mildly. Hundreds of millions of dollars are pouring into the state for the runoff elections, which will determine which party controls the Senate and whether Republicans can put roadblocks in the way of President-elect Joe Biden.

According to Wilson, her work at Women Engaged has shown that the most effective way of mobilizing and empowering voters is to create community year-round and not just during election cycles.

“I do believe that you don’t experience high voter turnout without sustained work that’s happening on the ground, done by organizations like ours and others to just put the best interests of our communities first and really build and cultivate those relationships,” Wilson said.

It’s that kind of sustained work that resulted in more than 1 million new voters being registered to vote in Georgia since 2018 and led to record turnout in November when Biden narrowly defeated President Trump to become the first Democrat to win the state since 1992.

But Georgia has a reputation for voter suppression, and several voter-engagement groups seeking to register and turn out Georgia voters have been under attack as the December 7 deadline for voter registration for the runoffs approached.

Have you moved, changed your name, recently off papers, or turning 18 before January 5th? Register today!

On November 30, the Georgia secretary of state, a Republican, launched an investigation based on allegations they committed fraud in their efforts to register voters, including attempting to register a dead woman in Alabama to vote in Georgia.

The groups, including America Votes, Vote Forward and the New Georgia Project, have denied the accusations. “As Georgians are turning out in record numbers to have their voices heard at the polls, the Secretary of State is resorting to desperate attempts to smear law-abiding organizations and scare eligible Georgians from registering to vote in critical upcoming elections. We will not be deterred,” said Nse Ufot, executive director of the New Georgia Project.

Days later, several national civil rights groups countered, filing a lawsuit charging that nearly 200,000 registered voters were wrongly taken off the rolls in Georgia. Most of these purged voters are “young voters, voters of lower income, and citizens of racial groups that have been denied their sacred right to vote in the past,” according to a statement by the Georgia ACLU, which filed the suit on behalf of the Black Voters Matters Fund, the Transformative Justice Coalition, and the Rainbow Push Coalition.

The January contests could be as close as the elections in November, when incumbent Republican Sen. David Perdue led Democratic challenger Jon Ossoff by 88,000 votes but finished just under the 50 percent of the vote needed to avoid a runoff. In the other Senate race, incumbent Republican Sen. Kelly Loeffler trailed Democrat Rev. Raphael Warnock by more than 343,000 votes, but that was a special election with 20 candidates running, including several other Republicans and Democrats, who divided the vote.

For the runoffs, activists are leaving no stone unturned as they search for new voters, including an estimated 23,000 young people who are going to turn 18 between the general election and January 5. In a close election, the youngest of the potential electorate could play a crucial role, and they have been courted by voting groups across the state, including Women Engaged, as well as student activists on college campuses, and youth-focused voting education organizations like The Civics Center, which centers mainly on turning out high school students.

With COVID-19 infection rates rising, demand for mail-in ballots, especially among Democrats, is expected to again set records or near records. As of December 6, when the positive test rate hit 9.9 percent, more than 940,000 people had requested mail-in ballots, a number which is expected to increase in the coming weeks. In November, a record 1.3 million Georgians voted by mail.

The pandemic also has meant that much of the work of grassroots organizations in Georgia has had to be online.

One such group is the Georgia Association of Latino Elected Officials (GALEO), an organization dedicated to promoting civic engagement and leadership among the state’s Latinx communities.

Now, the organization has joined others in utilizing phone and text banking strategies to reach potential voters over these past months in Georgia’s multiple elections — from the primaries back in June to the upcoming Senate runoffs. Facebook, Twitter, Instagram, and TikTok have been used to reach voters as well.

GALEO has positioned itself closely to the Latinx community, partnering with Spanish-speaking media across radio and television in order to get out the vote. Currently, Gonzalez added, “we’re asking people from around the country to adopt 10 Latino voters to send them a holiday card and encourage them to go out to vote in the January 5 runoff.”

Perhaps most crucially, GALEO provides nonpartisan information in both English and Spanish to potential voters in a state where only one of 159 counties provides Spanish-language information on how to vote — information crucial to activating an electorate even after voters finish registering.

“It’s not only about registration, because there’s already 250,000 Latinos registered to vote, it’s about mobilization and making sure that those that are registered already do go out and exercise their right to vote,” Gonzalez said. “Because the control of the US Senate now hangs in the balance … and Latino voters … could determine the outcome. … We certainly have scaled up our work and made sure that the Latino community is going to be reached like never before.”

Wilson agrees that organizing goes beyond simply registering. “[Voter] registration is the first step,” she said. “We want to make sure that we continue to make this process ethical for people, make sure that people know their rights … and feel confident in completing the information knowing that they can end up on the voter roll.”

Given the problems that Georgia voters have faced in terms of the voter rolls in the past — like in 2018, when a purge of thousands of voters possibly cost Stacey Abrams the governorship — such confidence is especially needed.

Georgia also has laws requiring voters to show ID at the polls, adding extra steps to the process of enfranchisement.

“We make sure that we help assist folks who may or may not have a Georgia ID and how they can go and obtain a voter ID from the county elections office and other ways that they can prove their residency here in Georgia,” said Wilson regarding Women Engaged’s work in voter education. “That’s really what integrated voter engagement is about. It’s getting people involved beyond just the voting pieces out there but also taking active stances and their advocacy around the issues,” said Wilson, whose work aims to empower “Black women, girls, and femmes, especially young people and LGBTQ+ folks.”

So far, Women Engaged reports it’s reached out to register more than 6,000 people through social media and thousands more through phone banking and in-person efforts.

Jennifer Costa, the director of volunteer training at voter education organization Spread the Vote — a multi-state, nonpartisan organization with a large presence in Georgia — is on a similar track.

“We’re really focused on making sure that people can make it to the polls and … cast their ballot,” said Costa. “We put a lot of focus on making sure that voters are educated on voter ID laws … and that if they don’t have access to identification, that they can get it.”

Indeed, voter ID laws in Georgia make voting difficult for certain demographics beyond voter registration. People born out of state, people of color born before the civil rights era, and people born at home, for example, can all have a harder time acquiring an ID. Spread the Vote promotes this education primarily through voter guides distributed to community spaces like churches and shelters, while also helping to pay the potentially restrictive costs associated with IDs.

At the core of all these groups’ operations is a commitment to mobilizing those who traditionally have been left out of the electoral process.

For GALEO, it’s engaging with the state’s growing Latinx electorate. For Spread the Vote, it’s placing “a lot of emphasis on letting folks know that they’re eligible [to vote],” Costa said, including “reaching out to both administrators in county jails and folks that are there right now, letting them know that there are a whole lot of people that are eligible to vote that are in jail.” And for Women Engaged, Wilson said, it’s “working with folks who would be considered infrequent voters or people who … are a little bit more transient, like our young folks.”

Early voting and vote-by-mail start on December 14, and mail-in ballots can be requested until December 31. The voting period ends on election day on January 5.