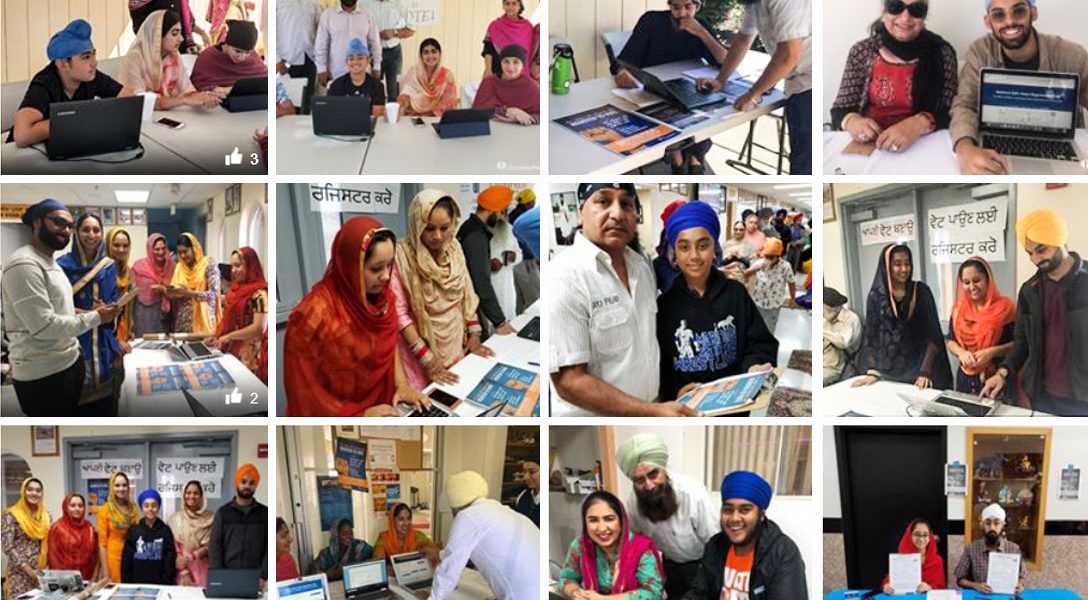 US Sikh Activists Attempt to Make Their Communities’ Voices Heard

It was 113 years ago, on September 4, 1907, when the shameful incident happened. It marked what was possibly the first instance of violence targeted towards the Sikh community in this country.

That’s why Balwinder Kaur often visits the Arch of Healing and Reconciliation in Bellingham, WA, to remember the Sikh and other South Asian immigrants who were attacked, robbed, and chased out of their homes by angry mobs.

She reads the plaques on the monument dedicated to the victims of the organized assault by workers in lumber mills who were worried that nonwhite colleagues were taking away their jobs, even though the newcomers did the most dangerous jobs and were paid the lowest wages. After that, many South Asians fled to Canada and dispersed to other states.

Kaur, a 62-year-old Sikh woman who came from Punjab, India, 25 years ago, knows that since then, there have been many incidents of hate crimes against the community, including the massacre at a Sikh temple in Wisconsin in 2012.

She isn’t the only one worried.

Earlier this year, the Sikh Coalition, for the first time in its 20-year history, initiated a project to push Sikhs to “get out and vote.”

“This is the first time we have pushed for a big engagement and we have had the biggest volunteer mobility,” said Nikki Singh, policy and advocacy manager for the coalition.

“We want Sikhs to be registered to vote. We want to be involved, educated, and informed and we are doing all we can to answer their questions and concerns. We want every household to be involved.”

And this election, considering the pandemic and the Black Lives Matter movement and protests, is especially challenging and eye-opening for the country, Singh said. She points out that in 2017 and 2018, hate crimes against the community went up 200 percent. And these tend to be underreported.

“If Sikhs vote, we will have a safer, more diverse, and a more inclusive America. And maybe we will feel more comfortable interacting with our elected representatives. And that’s just the beginning. We hope we will then become a part of the political process by running for public office and using our voice to shape policies.”

To emphasize the importance of participating in this year’s elections, the Sikh Coalition shared a minute-long film by Kaur’s daughter, the writer, director, and producer Satinder “Sati” Kaur. Satinder Kaur made the film with her mother acting as a conscious voter, and titled it Why Balwinder Kaur Will Vote in 2020.

“This election is different. We need leaders who will bring us together and address our concerns,” said Kaur, who is currently working on a project for NBC.

Her family has always voted but she does know that many families, especially the older generation, tend to only vote for highly publicized and sometimes controversial elections.

“We can’t afford to sit this election out. The young generation is all fired up, but we need the older ones too. Everybody must vote because the change we make now will last forever.”

Satinder Kaur got the idea for the film from her family.

Her mother vows never to forget the victims of the Bellingham riots and others who faced hate crimes. She and her husband Surjit Singh, 65, came from Punjab, India to Orange County, CA. They raised their two children, filmmaker Satinder Kaur, 37, and Sunny Singh, 35, a business owner, to be aware of social justice issues.

Satinder and Sunny came of age during what was perhaps the most dangerous period for Sikhs in the US; after the 9/11 attacks the general public confused Sikhs with Muslims and subjected them to vicious and violent crimes.

They assaulted and mocked Sikhs with cries of “Osama,” after Osama bin Laden, who was the founder of the militant Islamist organization al-Qaeda and the mastermind of the terrorist attacks.

Horrified by the growing violence against Sikhs, a nonprofit organization called the Sikh Coalition was formed in New York City.

The Sikh Coalition’s mission is to educate the public and to empower Sikhs to be proud of their religion, to combat hate, to prevent discrimination in the workplace, to stop bullying and harassment in schools, and to represent victims in court.

But they know that for Sikhs to have a voice in their communities, they need to be involved in local politics. This starts with the awareness of their civil rights, especially the right to vote.

However, the organization has spent years documenting attacks against Sikhs triggered by an ugly pattern of aggression that is based on the fact that people associate their beards and turbans with terrorists.

The first Sikh victim after 9/11 was Balbir Singh Sodhi, a gas station owner who was shot and killed in Mesa, AZ. There were years of hate crimes such as assaults and arsons at Sikh temples. In August 2012, a Sikh temple in Oak Creek, WI was the site of a mass shooting that took the lives of seven community members.

Most Americans know little about Sikhism, the world’s fifth-largest religion, which originated in Punjab, India, or its 3 million followers worldwide.

In the United States, there are 500,000 Sikhs, and yet few can distinguish them from Muslims or other ethnic groups.

This election year, the Sikh Coalition knew they had to reach as many Sikhs as possible and that they couldn’t just depend on the local temples. The largest Sikh Temple in the US is Gurdwara Sahib of San Jose, CA. Photo credit: Jonathan Dinh / Flickr (CC BY 2.0)

While they have concentrated on those states, they are reaching out to Sikhs in every state.

Sikh volunteers across the country say that they are having a great amount of success with reaching out to their community through phone banking during weekends.

“I hope that I do my part in relaying as much information as possible about the importance of Sikh American voting, and emphasize that our community is marginalized and we need to know that our voice matters,” said Tarleen Kaur Sodhi, 19, a volunteer in Orlando, FL.

“Sikhs, like many minority communities in America, have faced incredible challenges in our nation’s larger struggle for civil rights. Given these challenges, it is imperative that the Sikh voices be heard. … That’s why the Sikh Coalition believes that it is critical for all Americans, regardless of party affiliations or political preferences, to cast their ballots in November.”

Sodhi is passionate about equal opportunities for all.

“My parents taught me to never take my civil liberty for granted, which is why I feel that if you don’t push to make your voice heard, someone else will decide for you,” said Sodhi, who has dedicated her weekends to calling older Sikhs to explain mail-in ballots and polling locations.

“I trust other Sikhs will exercise their right to vote because we can create effective change in this country with our Sikh American values of equality, justice, and service within all.”

Volunteers across the country believe that the get-out-and-vote initiative is a powerful and impactful one.

“Whether it is at the local, state, or federal level, you can make your voice heard. And if you do not vote, you will never understand the issues on the ballot and then you cannot complain. If you care, you have to vote.”

Jagdeep Singh, 54, a volunteer in Orange County, CA, said that spending hours calling the community has been a “worthy, important cause.”

“It was easy to explain to the older generation that their quality of life depends on a good government as does the lives of the next generation. Whether it’s property taxes or international law, you can make changes,” Singh said.

And while the nation is obsessed with the presidential race, all the elections are important and have consequences.

“Whether it is at the local, state, or federal level, you can make your voice heard. And if you do not vote, you will never understand the issues on the ballot and then you cannot complain. If you care, you have to vote,” he said.

Singh added that voters, especially those in minority communities, do not believe that their participation makes a difference.

“That’s not true. I tell them every vote counts. Some elections have been won by a thousand votes. We have to change that mindset.”

“There has never been a more important time to vote. The current atmosphere has enabled a lot of negativity and hate towards all minorities. The Sikh community needs to be fully engaged and stand up for what is right and once again make the United States a beacon of rightfulness and extinguishing hate of all kind[s],” said Dr. Satinder Bharaj, who lives in Cincinnati, OH.

He is the past president of the Guru Nanak Society of Greater Cincinnati, the temple of the Sikhs. He remains an active community leader and advocate.