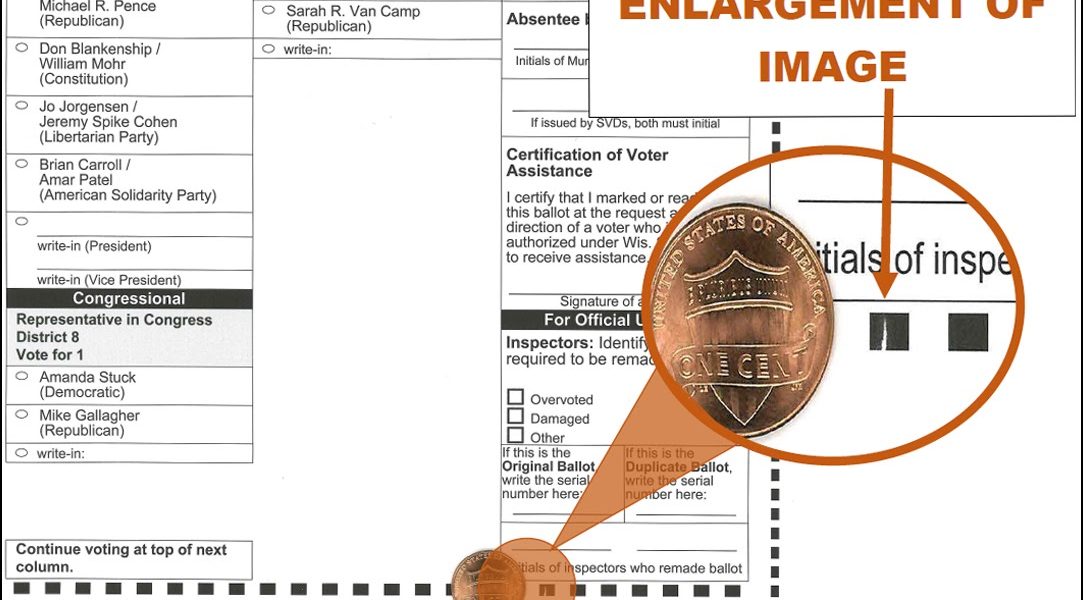 Sample of a marred ballot used in the 2020 general election in Outagamie County, WI. The same ballots are being used in Calumet County. Photo credit: Outagamie County PDF
Elections

A tiny mark on paper ballots in two Wisconsin counties could leave a massive mark on the presidential election.

The mark was accidentally printed on approximately 24,000 ballots and was eventually spotted by clerks in Outagamie and Calumet counties, but not before roughly 13,000 were distributed to absentee voters.

The error makes it difficult for machines to accurately scan ballots, so election officials will now have to perform the time-consuming process of manually transferring votes from the imperfect ballots to blank ballots, with two election inspectors — one from each major party — supervising.

In the April primaries, more than 500 ballots had to be redone for a variety of reasons, a process officials said took about four minutes to complete for each ballot. This means the two counties, which are about 30 miles west of Green Bay and lean Republican, could be among the last to announce final tallies in a state Donald Trump won by just 22,000 votes four years ago.

Officials from the two counties had hoped that the Wisconsin Supreme Court would allow election officials to fill in the mark so the machines could read the ballots. But the court declined to act and said the counties were asking permission to disregard election laws, even though the Wisconsin Elections Commission had endorsed their request.

So far, the counties have not taken up the state’s offer to have the National Guard help with the cumbersome process.

Although votes may continue to be counted for many days after November 3, state law dictates that counties must report their tallies by 4 p.m. the day after the election. County officials nonetheless insist all votes will be counted.

“We’re going to continue to count all those ballots that are properly cast,” Outagamie County Deputy Corporation Counsel Kyle Sargent told the Post-Crescent. “If someone wants to try to challenge that,” he said, “I think they’re going to have an uphill battle.”