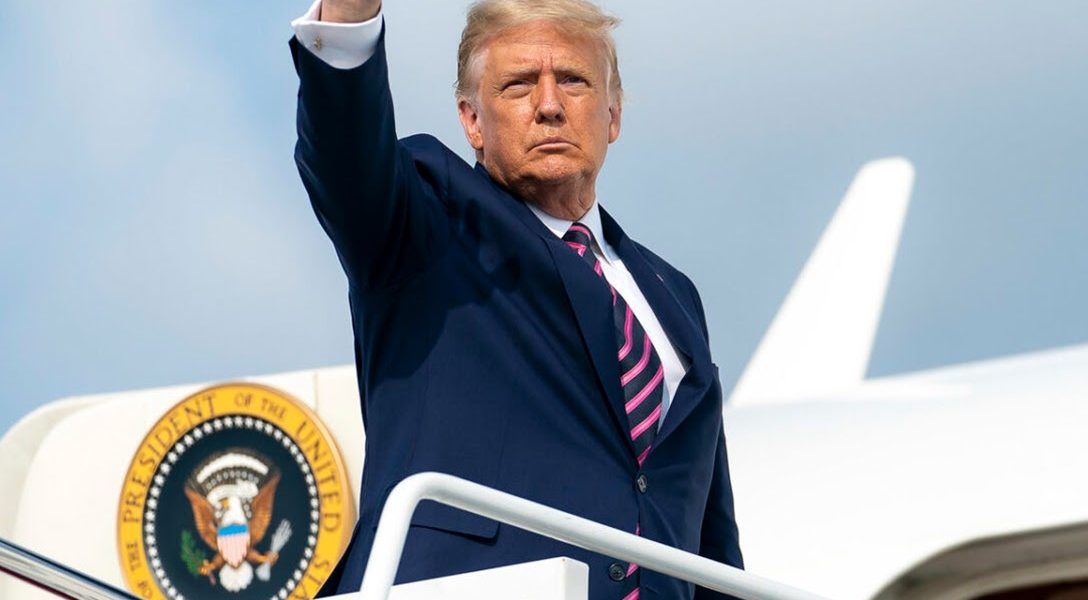 Trump’s End Is Near, but He Refuses to Hear

After months of laying the groundwork to discredit the outcome of the 2020 election, President Donald Trump and his allies continue to sow chaos and confusion as they refuse to accept vote counts across the country that show former Vice President Joe Biden is now President-Elect Joe Biden.

Taking their cues from the top, the Trump campaign and some of Trump’s most ardent supporters hope they can still win the election in the courts by showing that Biden was victorious only as a result of fraud, though they have yet to provide any specific examples of wrongdoing. This is in line with Trump’s message leading up to Election Day, which was to question the final results if absentee votes gave Biden the lead.

Their first legal maneuver was to try to stop the count in swing states and then limit the number of mail ballots that could be counted, though many of the cases were thrown out for lack of evidence.

In Nevada, Trump’s campaign filed a lawsuit to stop Clark County, a Democratic stronghold, from using its signature-matching system. Two federal courts rejected the suit. Both the Trump campaign and the Nevada Republican Party asked for increased access to monitor vote counting in Clark County. That lawsuit is still pending after Nevada Democrats refused the request, charging that the threat from COVID-19 required observers to respect social distancing.

As early results trickled in on November 3, Trump used Twitter to prematurely declare victory. Trump claimed that because officials continued to count ballots, this meant Democrats were trying to “steal” the election. Twitter immediately began labeling Trump’s tweets as misleading. That fueled charges from Trump’s supporters that social media platforms were “censoring” Trump, proof that a “fix” was in.

In fact, election experts had expected Trump to experience an early surge from Republicans casting ballots in person. That surge, known as the Red Mirage, was expected to give way as absentee ballots were counted. The phenomenon is known as the Blue Shift. The one state where the process was reversed was Arizona, which has long relied on voting by mail. In Arizona, Biden had an immediate surge from absentee ballots that had been counted in advance. Biden’s lead diminished gradually as the ballots cast in person were added to the total. Still, Trump has not secured enough to erase Biden’s lead in the state.

Unable to accept that he might actually lose, Trump, speaking at a White House reception, told supporters, “We did win this election,” and “This is a major fraud in our nation.” Trump insisted that the Supreme Court would have to intervene, but provided no details on how that might happen.

Fox News host Mark Levin took the Trump campaign’s assault on the election results to a new level by suggesting that Republican state legislatures should simply ignore the voters and send their own slate of electors when the Electoral College meets on December 14. Levin incorrectly claimed that state legislatures “HAVE THE FINAL SAY OVER THE CHOOSING OF ELECTORS” in a tweet Thursday afternoon, ignoring the fact that, under the laws of nearly all states, electors are legally bound to vote for the candidate of the winning party.

Misinformation also contributed to the campaign’s questioning of the election’s legitimacy. In a controversy dubbed “SharpieGate” in Arizona, Laurie Aguilera, a Maricopa County voter, claimed that her ballot had not been read properly by vote scanning machines because she had used a Sharpie and “the ink was bleeding through.” The morning after Election Day, Aguilera filed a lawsuit, supported by the Public Interest Legal Foundation, a conservative legal group in Indiana.

The ruckus over Sharpies was quickly debunked, but not before spreading like wildfire online. As it turned out, the Sharpie markers had been recommended by the manufacturer of the scanning machines, and far from invalidating the ballots, the markers actually made the ballots easier for the scanning machines to read. On Thursday, county election officials released a statement to the effect that Sharpies were “recommended by the manufacturer.” Christopher Krebs, the director of the Department of Homeland Security’s Cybersecurity and Infrastructure Security Agency, felt obliged to tweet: “Don’t promote disinfo! Stop spreading #SharpieGate claims.”

Not surprisingly, state Republican parties have joined the fight. In Wisconsin, the GOP emailed supporters telling them to encourage Trump supporters in Pennsylvania to send in absentee ballots late in the hopes that they would not be postmarked but would still be counted. The apparent intention was to create the impression that ballots which had been mailed after Election Day were being accepted and to cast suspicion on the whole process of voting by mail.

“Today and for the foreseeable number of days until they decide they are done counting, we are going to be chasing our absentee ballots over in Pennsylvania,” said Chris Olmstead, the deputy director for Trump Victory in Wisconsin, in audio obtained by the Milwaukee Journal Sentinel.

In a statement to the Journal Sentinel, Wisconsin Trump campaign spokeswoman Anna Kelly denied Trump campaign involvement and insisted that “the email in question was sent by an unaffiliated local group and any related social media posts have been taken down.”

“Trump Victory continues to fight for election integrity at every level,” Kelly said, “as we ensure that every legal vote for President Trump and other Republicans is counted fairly and accurately as required by law.”

In Wisconsin, the Republican-majority Wisconsin State Assembly announced it would launch an investigation into how the election was conducted. Biden is projected to win the state by at least 20,000 votes.

State Assembly Speaker Robin Vos nevertheless cited concerns about “mail-in dumps and voter fraud” as his reason for ordering the investigation. Vos specifically mentioned Milwaukee’s centralized process for counting absentee ballots as an area of focus for the investigation. Milwaukee, the state’s largest urban center, has long been a Democratic stronghold.

The investigation is being headed by Ron Tusler, chair of the Assembly Committee on Campaigns and Elections. Tusler told ABC, “If there’s voter fraud out there, and there very well could be, I hope that we’ll uncover it and bring those folks to justice,” although he was unable to cite any specific examples of voter fraud in the state during the election.

Claire Woodall-Vogg, director of the Wisconsin Elections Commission, issued her own statement calling Vos’ comments “defamation of election administrators” and claiming that they are as “disingenuous as they are damaging.”

Democrats in the State Assembly released their own repudiation of the Republicans’ investigation, stating, “This is a ridiculous attempt to cast doubt on the results of the November 2020 Presidential Election in Wisconsin, and we reject it outright. It is irresponsible, unnecessary, and unfounded.”

As Biden began to take the lead in several states, the Trump campaign turned to Pennsylvania and falsely claimed that poll observers were not given enough access to monitor the vote counting process. In fact, both Democrats and Republicans were able to observe the process.

Pennsylvania is counting any absentee ballots postmarked by November 3 in the final tally, as long as they were received by November 6. The extension that allowed counting until November 6 caused a delay in reporting final results, but it was only necessary because the Republican majority in Pennsylvania’s state legislature rebuffed requests by state election officials to begin counting mail-in ballots before 7 a.m. on the day of the election. Most Pennsylvania county election offices did not begin counting mail-in ballots until the day after the election.

Trump confidant and former White House adviser Sebastian Gorka suggested in a somewhat unhinged statement on his podcast Thursday night that “we need the US Marshals to deploy and they need to break down the doors of those polling stations and stop the crimes being committed.”

Likewise, allies of the president have attempted to discredit the results in Michigan, where Biden’s margin of victory was more than 145,000 votes. John Solomon, a conservative columnist who has been criticized for writing several debunked stories about Biden and Ukraine, tweeted that election workers were “asked to backdate ballots that had come in after the election deadline had passed.”

Politifact debunked this claim, citing Michigan’s election rules that prohibit ballots from being counted if they were received after Election Day. Michigan did not have a deadline for postmarking ballots, either.

In Pennsylvania, some election mail has prepaid postage, which is not automatically postmarked and could potentially be counted if it arrived before the Friday deadline. The Pennsylvania Supreme Court ruled — and the US Supreme Court upheld — that ballots received by that time without postmarks would be considered viable “unless a preponderance of the evidence demonstrates that it was mailed after Election Day.” That did not stop Sen. Lindsey Graham (R-SC), a strong Trump ally, from questioning the results in the Democratic-stronghold of Philadelphia.

“Philadelphia elections are crooked as a snake,” Graham said on Fox News. “Why are they shutting people out? Because they don’t want people to see what they’re doing.”

Despite most major media outlets calling the 2020 election for the former vice president, Trump is making it clear that he refuses to step down without a fight. On Saturday, he tweeted, in spite of the facts, “I won this election, by a lot!” Twitter again flagged the tweet as misinformation. Trump reiterated his claim that poll observers were not given adequate access in Pennsylvania and warned that “this election is far from over.”

Trump campaign surrogates have repeatedly insisted that only ballots received on Election Day are legal and should be counted. Under the US Constitution, each state establishes its own rules concerning elections. Several states extended the deadline for mail ballots to be accepted as long as they were postmarked by November 3.

Several notable Republican officials have already congratulated Biden and Vice President-elect Kamala Harris for their apparent win. Others have found it difficult to separate themselves from  Trumpworld just yet. House Minority Leader Kevin McCarthy (R-CA) told Fox News host Laura Ingraham on Thursday that “President Trump won this election.” He followed up his on-air comments with a tweet proclaiming: “Republicans will not be silenced. We demand transparency. We demand accuracy. And we demand that the legal votes be protected.”

Likewise, Senate Majority Leader Mitch McConnell (R-KY), who has largely stayed silent on Trump’s refusal to concede the election, tweeted on Friday that “Every legal vote should be counted. Any illegally-submitted ballots must not.”

There have been some suggestions from Trump supporters that states like Pennsylvania, which voted for Biden, should declare that the election “failed” and hold a new election. When asked by Fox News host Sean Hannity about this, Sen. Ted Cruz (R-TX) hedged, apparently seeing that as a step too far, and responded that it would be “a big cannon to use.”

“I can tell you during Bush v. Gore we were having very explicit conversations about that, as we were seeing an effort to steal that election,” Cruz said. “The answer that I want to see, the outcome that I want to see, is to count every vote that was legally cast and for the president to win.”

Sonnet Swire contributed to the reporting of this story.