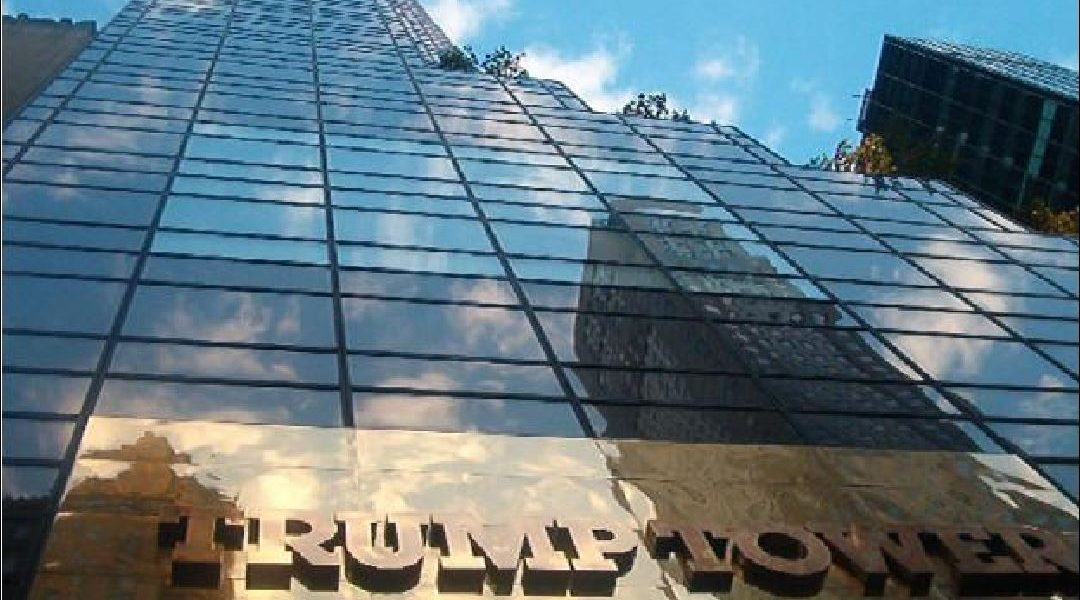 Is Trump Gambling His Empire With Risky Prez Bid?

To New Yorkers, the name “Trump” is always written with a certain unique flair — and is always outsized.

Gold-plated and tall as a man, the name “TRUMP” dominates an entire block on Fifth Avenue. The unavoidable letters, which hover above the entrance to the Trump Tower, signify not just a name, but a brand.”

Donald Trump’s personal brand — his name alone — has always been an integral part of his success. His initial financial disclosures with the Federal Election Commission valued his name at $3,320,020,000, nearly half of his total worth.

In other words, half of what Donald Trump has is his name. Branding experts contacted by WhoWhatWhy felt that this astronomically high value for a five-letter name — higher than the GDP of more than 30 countries — seems accurate in comparison with real estate brands of similar success.

To see the enormous value of Trump’s brand, one need look no further than the success he has had in the campaign for US president so far. Many Trump supporters have made it clear that their support for the candidate comes from a belief in his personal integrity and business skills more than in his policy proposals.

“If I was buying stock in Trump’s brand, I’d probably want to sell it now”

Making Trump’s brand the focus of his campaign may have led to polling success in the short term, but as experts in marketing suggest — it may pose a large risk if things go sour for him in the election.

“If I was buying stock in Trump’s brand, I’d probably want to sell it now,” Ian Stephens, owner and managing partner at Saffron Brand Consultants, told WhoWhatWhy. “It could be worth nothing in two days.”

Stephens feels that Trump’s political success can be traced to the same personal branding that is behind his business success. He compares the “authentic” association of the Trump brand with the rise of the craft beer industry — the desire by consumers and voters alike to cut through the generic.

While Stephens sees robust strength in Trump’s personal brand, he sees a dangerous risk for it as the election — and the negative press — continue.

“[Branding] is much more fragile when it comes to individuals,” says Stephens. “There’s a human being in the middle of it, and that human being is as volatile as anything.”

Stephens highlights the way Trump’s increased profile has the potential to magnify any missteps he may make. Trump has made strong inroads based on his aggressiveness, but “even that could go too far.”

Visibility Over Value — Does it Matter?

O.C. Ferrell, University Distinguished chair of Business Ethics at Belmont University and co-author of Principles of Marketing, agrees that Trump’s actions have solidified his brand, but he disagrees with the notion that this is a misstep.

“I think he’s too smart to do these kinds of things accidentally. He’s getting millions and millions of dollars in terms of publicity.” And, Ferrell points out, people usually forget negative associations with a brand over time — leaving just the success in people’s memories.

“I think he’s too smart to do these kinds of things accidentally.”

Trump’s bad publicity has already had business ramifications in the short run — the mogul has lost endorsements from myriad sources over some of his racially-charged comments. But even with NBC dropping Trump from The Apprentice and Univision ending its partnership with Trump’s Miss Universe pageant, Ferrell nevertheless sees Trump as extremely business-savvy.

“The people that dropped him — he was probably ready to end those [relationships],” Ferrell told WhoWhatWhy.

“What he’s doing will probably increase his brand identity,” contends the marketing professor. “Something there captures part of the voting population. He comes across as authentic.”

“Everyone’s fed up with politicians trying to appeal to everyone.”

Mel Carson, founder of Delightful Communications, a personal branding firm, points out that building the brand’s visibility is unhelpful to Trump if it becomes too fraught with negative associations. A bigger brand means more people recognizing what it represents.

“Trump has overstepped the line in his eagerness to get some press over the other nominees,” he told WhoWhatWhy. While Trump’s rhetoric is winning him success with a certain subset of the American populace, observes Carson, his antics will likely hurt him in the business world.

“He’s gonna have put a lot more notoriety around himself and what he’s said,” Carson says. “There are some people in this country with extreme views who are going to believe him. But people with influence in the business world and brands are not going to.”

“Any press about what he’s saying around the world will be centered around the negativity. If people are talking about it in the UK, I can guarantee that it has had a negative effect on America. ‘Look at these crazy Americans!’”

Still, Carson suspects that even with these hits to his business brand, Trump’s properties may not suffer, sincereal estate remains a tangible business, rooted in reliable properties.

“I don’t think he’s going to lose anything, but he’s not going to gain from it. The negativity of his personal brand has been solidified in many people’s views.”

To Kevin Lane Keller, E. B. Osborn Professor of Marketing at the Tuck School of Business at Dartmouth College and author of Strategic Brand Management: Building, Measuring, and Managing Brand Equity, Trump’s monopoly of headlines means that any missteps he makes will be nearly impossible to live down.

“If for whatever reason he becomes tainted, he sort of gets tagged, no matter what happens in the future,” Keller told WhoWhatWhy. He suggests that the Internet has changed how long negative press lasts. In any Internet search for a person involved in a scandal, previous news stories stick around. “There’s so much more media in various forms. It’s kinda hard to shake.”

Keller thinks the real danger comes when business negotiations begin to be influenced by the version of Trump seen in the campaign. “People have to feel at least some level of comfort with the brand to get involved with the property,” he says.

“I don’t know why people would ever trust him with anything.”