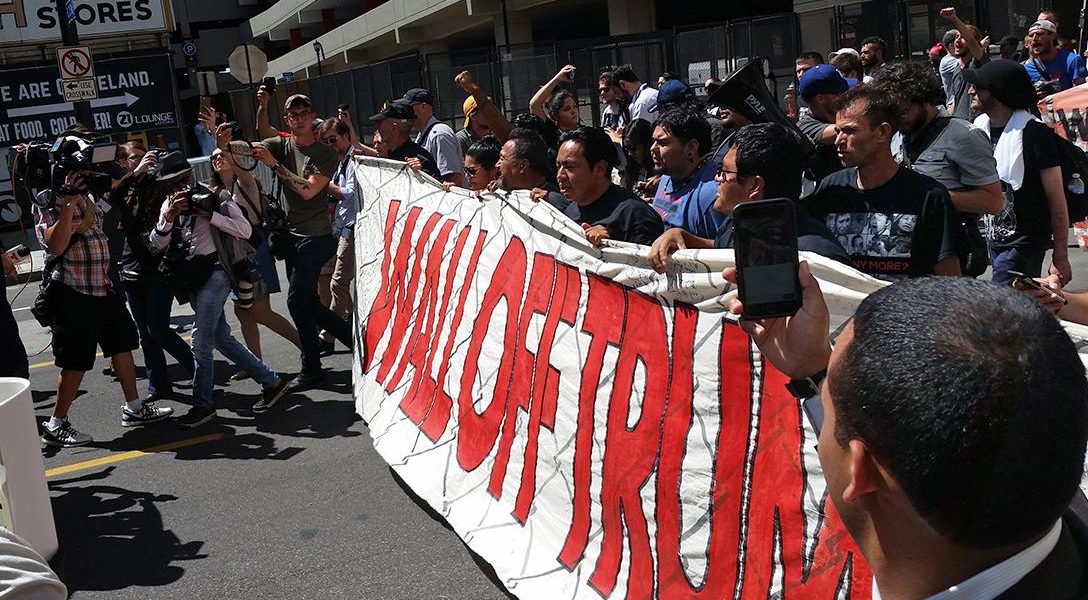 Trump Supporters and Opponents Agree: Candidacy Is About Race

These were the official themes of Donald Trump’s Republican National Convention. From the podium the newly anointed GOP standard-bearer focused on law and order, on boosting the economy, on an American foreign policy based on limiting foreign entanglements, and on further restricting immigration. The dangers of immigration were raised over and over again. In his speech Thursday night Trump even implied that illegal immigrants were criminals responsible for harming many Americans.

But for many of Trump’s supporters reached by WhoWhatWhy outside the convention in Cleveland, as well as those protesting against him, riling up white fears of minority encroachment did not need to be so subtle. They were clear that race is the biggest issue in this campaign.

No Problems Being Called Racist

Lawrence, a student in his 20s who requested not to have his last name printed, described himself as a white nationalist, and said he had no problem with being called racist. He feels that many Trump supporters are just hiding their true feelings when they talk about immigration.

“They think that the only way you can be racist is by screaming the N-word at somebody,” he told WhoWhatWhy.

Lawrence felt that most of the Trump supporters were racists as well, but said “I don’t think that they realize it yet.”

Lawrence first got interested in Trump’s campaign through discussions with friends on the online chat-room 8chan. He became excited when he saw Trump “targeting specific groups and not pandering” — specifically regarding his views on Mexicans and Muslims.

He sees America as a “WASP nation,” founded by Europeans, which would be better off not mixing with blacks or Latinos. He feels that the country’s “cultural heritage” is important enough to enforce massive deportations and even violence by the government, since integration between the races only leads to strife anyway.

Trump, to him, is a revelation — a candidate who actively advocates for the white population. And he is not alone.

“I just believe very passionately in the preservation of Western Civilization,” Jeff Jones, a 48-year-old worker for a defense-contractor supply chain from Syracuse, NY, told WhoWhatWhy, after he attended the Citizens for Trump America First rally on Monday. “If someone was to interpret that as some form of racism on my part, then so be it.”

Jones says that he has not personally been affected by illegal immigration in his own life, but is concerned about how it will affect the future.

“I grew up in a traditional America,” he says, and he is unnerved by “these changes that are happening so fast.”

“We have our own culture. We’d like to keep it.”

Fighting Back Against Discrimination and Racism

On Wednesday morning, immigration advocates held a “Wall Off Trump” rally just outside the convention. They marched from the Cleveland public square to the Quicken Loans Arena, where they held up a large banner emblazoned with bricks, yelling chants against the Republican nominee in both English and Spanish.

José Landaverde, 49, an Anglican priest from Quincy, IL, and 27 other activists walked for 37 days to attend the rally and other Trump protests in Cleveland. He came “to send a message to Donald Trump that we will no longer tolerate his message of discrimination and racism, and also his position against our immigrant communities.”

“I’m angry. I’m pissed,” said Sheridan Aguirre, 22, the communications coordinator for United We Dream, an immigrant activist organization that joined the rally’s organizers, the “LatinX” group Mijente, in protesting at the RNC. “Hearing all this foul language, all this hate, every day. Every time that I log on to Facebook or Twitter, I’m seeing people who are getting killed, who are getting murdered, who are being deported, and all of it’s being agitated by this hateful language, by all these ideas of white supremacy, all these ideas that encourage people to go out and marginalize people like me.”

Aguirre is himself an undocumented immigrant — he was brought to Texas by his mother when he was just a year old and has lived there ever since. He has five younger siblings, who, by virtue of being born in America, are American citizens, and therefore only worried about their parents and their brother being deported, not themselves.

Aguirre is not ashamed of his immigrant status. He works as an activist, and says that his fear of personal repercussions is “long gone. When people are aware that they have power and that we’re here to stay, that does a lot to change our perspective on our role here.” Many commentators have expressed the idea that racial antagonism is central to the Trump campaign’s success. And while some have questioned this characterization, the same view was echoed by many of the Trump supporters reached by WhoWhatWhy.

Many of the Trump supporters were somewhat more subtle about their feelings about race, but still focused on immigration as a major concern.

“‘Racist’ is a crock of crap,” said Brian Bokuniewicz, 52, a designer at Ford from Dearborn Heights, MI, who also attended the America First rally. He felt that Trump’s words were being misconstrued by the media to make him seem racist instead of focusing on security. “The immigration thing — you know that’s a bunch of crap. They’re just twisting it.”

Bokuniewicz nevertheless repeated far-fetched claims about Barack Obama usually considered racially charged: that his Hawaii birth certificate is a lie and he was not born in the United States, that he is secretly a Muslim, that at the US-Mexican border “they’re landing planes, they’re bringing them off, they’re taking them and throwing them in buses, and then they’re going out to all these bus depots and they’re giving them free rides.”

When it comes to attitudes about immigration, the divide between these Trump supporters and his most fervent detractors could not be deeper or wider.

“I’m here because I live in a neighborhood in Portland, Maine, that has a lot of Muslim refugees, and my wife works closely with a lot of Muslim refugees,” said Chris Thompson, a 44-year-old writer attending Monday’s Stop Trump rally. “And these are people I see every day and people I have dinner with. The whole idea that they should be under this cloud of suspicion just disgusts me.”

Thompson was one of the few protesters at that rally who saw voting for Hillary Clinton as a necessary action in the face of Donald Trump’s candidacy. He told WhoWhatWhy that although he usually ignores electoral politics, and considered Clinton “corporate,” the Trump campaign was different.

“My daughter goes to a grade school in Portland where 40-50% of the students are Muslim,” Thompson told WhoWhatWhy. “And while those kids were walking downtown one day, this grown man comes up to them and starts yelling in the Muslim kids’ faces, ‘Trump! Trump! Trump!’”

“People need to understand that the only way you can stop something like this is to stop it on the early side.”

Some Trump supporters in Cleveland tiptoed around the importance of race in their view of the candidate. A Fort Wayne, Indiana, man wearing a Trump t-shirt he got for volunteering for the Trump campaign cited overregulation of his small business as the main reason for supporting Trump. But he also complained that the country was “losing a common language,” and talked about how areas in Indiana had changed quickly to having majority Hispanic populations.

He also brought up security concerns from letting Muslims into the country.

Those sentiments alarm Muslims in Cleveland. The Stop Trump rally on the first day of the convention featured a large group from the Council on American Islamic Relations (CAIR), a civil rights and legal advocacy for Muslim-Americans. They came to the rally to make clear their opposition to Trump’s rhetoric blaming Muslims for America’s problems.

“The Republicans have been very exclusive. They really have shunned Islam and Muslims,” said Isam Zaeim, a board member for CAIR in Cleveland. He said the Democrats have been slightly better, but “still have been too quiet against what has been happening in our country.”

“I expect them to treat everybody equally. American Muslims are an important part of the tapestry of the nation and we should not be treated as second or third class citizens,” Zaiem told WhoWhatWhy.

“We shouldn’t feel like we are being attacked on a daily basis. That is not American.”