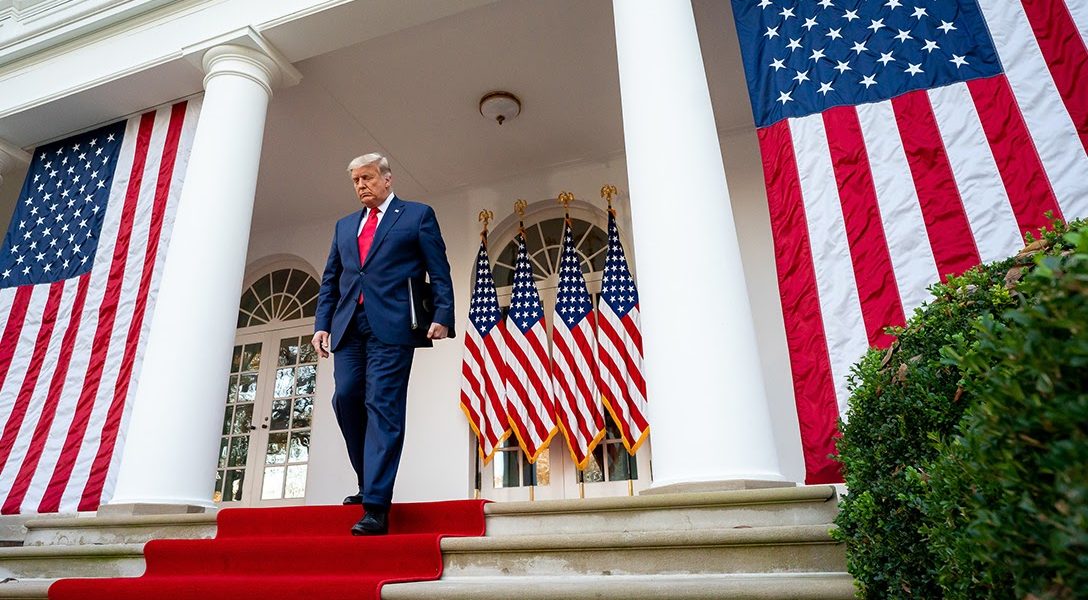 President Donald Trump descended the steps to the Rose Garden at the White House on November 13, 2020. Photo credit: The White House / Flickr
Elections

Following a tense week politically, more than half of American voters were able to breathe a small sigh of relief Friday night. This after top Republican lawmakers from Michigan emerged from an unusual White House meeting to announce that they will still follow the law and had “not yet been made aware of any information that would change the outcome” of the presidential election.

Michigan state Senate Majority Leader Mike Shirkey and Speaker of the House Lee Chatfield traveled to Washington at the invitation of President Trump, leading to widespread speculation that they were going to be pressured to try to overturn the results of the election in their state, where Joe Biden won by more than 154,000 votes.

In a press release afterwards, they claimed they’d met with Trump to hand him a letter expressing support for additional funds to be allocated to fight COVID-19 in Michigan. This claim was met with some skepticism, as both men have been outspoken critics of the intensity of Democratic Gov. Gretchen Whitmer’s COVID-19 response. The message also was undercut by Trump’s tweets Saturday morning that focused on still unproven claims of widespread fraud in the election.

“We will show massive and unprecedented fraud!” Trump tweeted in response to Shirkey and Chatfield’s statement on Twitter that strongly indicated the president had failed to make his case. “We have not yet been made aware of any information that would change the outcome of the election in Michigan and as legislative leaders, we will follow the law and follow the normal process regarding Michigan’s electors, just as we have said throughout this election,” they said. “The candidates who win the most votes win elections and Michigan’s electoral votes.”

Chatfield was later photographed with a pricey bottle of champagne in the Trump International Hotel, leading the Detroit Free Press to surmise that the Michiganders were spending the night there, even as activists projected their photographs on the outside of the hotel along with the message, “The world is watching.” Chatfield must have been amused, as he changed his Twitter profile photo to his image on the hotel.

All of this came at the end of a chaotic week in Michigan politics.

Earlier in the week, the two Republicans on the Wayne County Board of Canvassers initially refrained from certifying President-elect Joe Biden’s win in Detroit, casting uncertainty about who would be declared the winner in the state’s most populous county, even though the Democrat enjoyed a more than 332,000-vote margin of victory there. Their reluctance to certify the win for Biden reportedly prompted a call from Trump expressing support.

After a heated Zoom call with county residents, the Republican canvassers agreed to join their two Democratic colleagues in certifying the win for Biden. However, the next day, they signed affidavits demanding the state rescind their certification. The canvassers claimed there had been “serious flaws” in the election process in the county and that they had been threatened into certifying the win. One of them also expressed support for a Trump-promoted, baseless conspiracy theory that ballot counting software made by Dominion Voting Systems was faulty and had deleted votes for Trump.

But the signed certification documents had already been sent to the office of Michigan’s secretary of state and there’s no legal mechanism for changing them.

During a November 19 press conference, Trump’s personal attorney Rudy Giuliani seemed to imply that “taking out” votes from Wayne County could shift the election results in Trump’s favor.

He cited an affidavit filed by cybersecurity expert Russ Ramsland on November 17 that argued that there were more votes than voters in certain precincts in both Michigan and Wisconsin.

However, it was revealed that Ramsland had used data from Minnesota, including names of townships. Ramsland’s voter count also caused confusion as it didn’t match even the Minnesota secretary of state’s numbers.

Meanwhile, the Michigan Board of State Canvassers is scheduled to meet on Monday afternoon to certify Biden’s win. But Republicans have not given up. On Saturday, Republican National Committee Chairwoman Ronna McDaniel and Michigan Republican Party Chairman Laura Cox wrote a joint letter asking the board, which has two Republican and two Democratic members, to delay the certification for two weeks to allow for “an audit and investigation” of the election results in Wayne County.