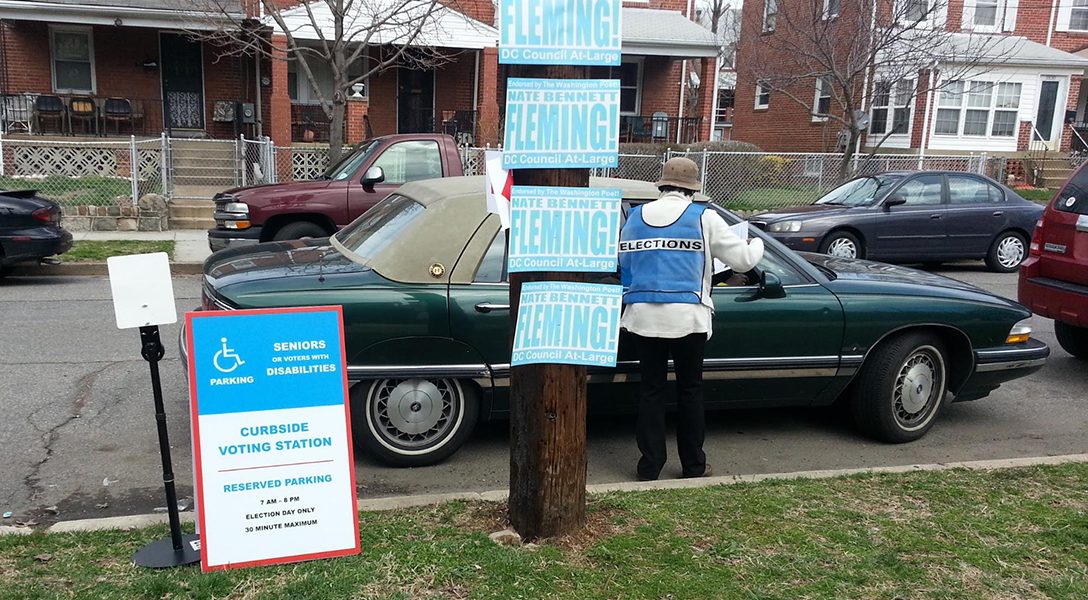 Thousands With Disabilities Have Lost the Right to Vote

Though an estimated 113 million US citizens got to vote in the midterms, thousands more were left out — unable to vote or even register because of laws that consider them mentally incapable of doing so.

These state laws affect the thousands of adults in the US under guardianship — people who, because of a disability, have been determined legally to be incapable of performing necessary daily tasks for themselves, and therefore are in need of a guardian to help them.

The status of their right to vote — much as for convicted felons — is determined by the state they live in. However, unlike the widely publicized disenfranchisement of felons, many people are unaware of the problems facing those under guardianship.

“This is an issue that, for the large part, I think, flies under the radar if you are not working on it,” Michelle Bishop, voting rights specialist for the National Disability Rights network, told WhoWhatWhy. “It’s not being talked about. The average American doesn’t know this type of thing happens, that you can have your right to vote denied based on having a disability.”

People can be placed under guardianship, or conservatorship, as it is known in some states, or interdictions, the equivalent in Louisiana, for a surprisingly wide range of reasons. The umbrella covers everything from mental illnesses, like severe schizophrenia, to cognitive disabilities like Down Syndrome, and even physical disabilities, such as a lack of motor function in their limbs that prevent individuals from going about their daily lives without assistance.

In many states, those who are placed under guardianship are deemed to fit the legal definition of either “mentally incapacitated” or “mentally incompetent.”

The loss of the right to vote can even extend to guardianships for people whose disabilities are purely physical. In 2011, David Rector, a former producer for National Public Radio, had his right to vote taken from him after his fiancée became his conservator. Two years earlier, a traumatic brain injury had left him unable to speak or walk, but had not affected his other cognitive functions. Rector was able to get his rights restored only after a new California law was enacted in 2016. According to the Bazelon Center for Mental Health Law, a legal advocacy group for adults and children with mental disabilities, 10 states have constitutions that explicitly bar individuals who are under guardianship from voting: Alabama, Louisiana, Massachusetts, Minnesota, Missouri, South Carolina, South Dakota, Tennessee, Utah, and Virginia. For example, Missouri’s state constitution says, “No person under guardianship of estate or person because of mental incapacity nor persons involuntarily confined in a mental institution can vote.”

Through independent research, WhoWhatWhy found that the laws in many of these states are interpreted differently. In Massachusetts, an opinion from the secretary of state requires a specific finding of incompetence regarding voting to allow disenfranchisement for people under guardianship. The laws are similar in Minnesota, South Dakota, and Tennessee — where a specific finding of “incompetence” or “incapacitation” to vote is required. In South Carolina, a disabled person can lose the right to vote if deemed “mentally incompetent” by a court.

In Arizona, individuals under plenary guardianship do not automatically retain their right to vote; however, under a law passed in 2012, individuals under limited guardianship can be permitted to vote if they file a petition, have a hearing, and a judge determines “by clear and convincing evidence” that they retain “sufficient understanding to exercise the right to vote.”

Additionally, there have been lawsuits that set legal precedents that changed how these laws are interpreted, or completely overturned them. In 2001 the decision in Doe v. Rowe found a part of Maine’s state constitution that restricted the voting rights of people under guardianship to be unconstitutional.

In the case Missouri Protection and Advocacy Services and Scarletty v. Carnahan, judges held that Missouri law allows citizens who are under full guardianship to retain their voting rights if they demonstrate a capacity to vote. However, judges in guardianship hearings retained the discretion to decide who can vote.

The laws of a given state aren’t interpreted uniformly by all judges there either, Jennifer Mathis, deputy legal director and the director of policy and legal advocacy at Bazelon, told WhoWhatWhy.

“It would be wrong to assume that everyone is doing what they are supposed to do. The laws on the books are followed unevenly at best,” Mathis said.

While some judges interpret the language in the constitutions or state statutes literally, others disregard the laws entirely. Still other judges impose their own tests and evaluations to determine an individual’s competence.

What determines competence to vote isn’t always defined clearly either. Sometimes a specific test is applied, said Mathis, such as questions like “Who is the mayor?” or “Do you know who the candidates are?”

Bazelon and the National Disability Rights Network oppose such tests. Asking questions to establish competence places a higher standard on people with disabilities than on people without them. Average voters don’t have to prove they have any level of competence to register to vote, Mathis said.

Bazelon and the National Disability Rights Network and other advocacy organizations argue the standard should be whether the person can communicate, with or without reasonable accommodations, a desire to participate in the voting process. Several states already use this standard, including California, which changed its laws in 2016. A Lack of Data

At this time, it is impossible to know how many people are prevented from voting because of their guardianship status. Even experts and advocates in the disability rights community aren’t sure. There is no unified database in the US tracking the number of people under guardianship. Nor is there data on the number of disabled persons who have had their right to vote stripped. Additionally, in some cases, competence can be restored.

The Election Assistance Commission, in its Election Administration and Voting Survey (EAVS), a comprehensive survey of national election data, does request the number of voter registrations that were stricken from the rolls in a jurisdiction because the voter was mentally incompetent. However, the EAC does not explicitly define mental incompetence in the survey.

It’s really up to each state to define by state law what is considered mental incompetence, said Sam Greene, the EAC’s Director of Research.

Because of the variability from state to state in the use of the term “mental incompetence,” the data does not paint a clear picture.

A WhoWhatWhy analysis of the EAVS from 2008 to 2016 found that states and counties were reporting data inconsistently. There is no penalty for jurisdictions that don’t report accurate data.

Missouri reported the highest number of individuals stricken from the voter rolls for incompetence of any state. Missouri law allows for disenfranchisement on the basis of guardianship and mental incompetence.

Twenty states did not report any numbers for people removed for mental incompetence. But Greene said a lack of reported data does not mean a state isn’t actually removing people from the rolls for being mentally incompetent; it may be just that the state chose not to report that data to the EAC. Several of these states, including Utah, have laws or language in their state constitutions that allow, or specifically call for, disenfranchisement based on mental incompetence.

States that have no laws allowing disenfranchisement based on mental incompetence or guardianship still reported individuals stricken from the rolls on those grounds. Among those states, Pennsylvania reported the highest number of people losing the right to vote for mental incompetence. Shari Brewer, head of the Election Bureau of Butler County, said the data they reported on the EAVS referred to persons with dementia or Alzheimer’s whose caretakers requested their names be removed from the rolls.

But official data tells only part of the story.

Many individuals who end up under guardianship never have the opportunity to register to vote; either because their guardian does not allow them to, or because the guardianship hearing stripped them of that right.

Sometimes, neither an individual about to enter guardianship nor the person seeking to be his or her guardian is aware that the individual may lose the right to vote. Sometimes guardians prevent their wards from voting.

“Many guardians control their wards — not all, but many,” Mathis said. “It may not be malicious, it may just be because they are so used to taking care of the person’s other needs that they may just think the person doesn’t have the capacity to vote.”

Some proponents of laws allowing for disenfranchisement fear that people with cognitive disabilities may be coerced to vote a certain way, or the person giving them assistance may not vote according to the person’s wishes. Charges of improper help to disabled voters were made in 2010 in Crow County, MN, but neither the county sheriff nor the FBI found any evidence to substantiate those accusations.

And many disability rights advocates believe this kind of logic is deeply flawed.

Mathis compares it to taking away someone’s money because someone else might steal it.

Advocates such as Teresa Moore with Self Advocates Becoming Empowered argue that while some people with cognitive disabilities may be initially less confident when it comes to voting, they are not less competent overall.

“We know that self advocates, once they go through training or have experience … take [that responsibility] really seriously,” Moore said. The self-advocacy movement seeks to allow people with disabilities to take greater control of their own lives and this includes voting.

Additionally, an emerging trend across the country is for supported decision-making, a less restrictive type of guardianship that allows those with disabilities to have more independence and more rights, including the right to vote. Instead of legally designating guardians to manage all a disabled person’s needs, the approach is to determine what needs can be met by that individual independently, and what needs require assistance, either from an outside party or from technology, Sharon Spurlock, director of family support services for the ARC of St. Louis, told WhoWhatWhy.

“What we learned once we started working with these families is that most families didn’t want to unnecessarily strip their family members of rights. They wanted to make sure that they had the resources that they need,” Spurlock said.