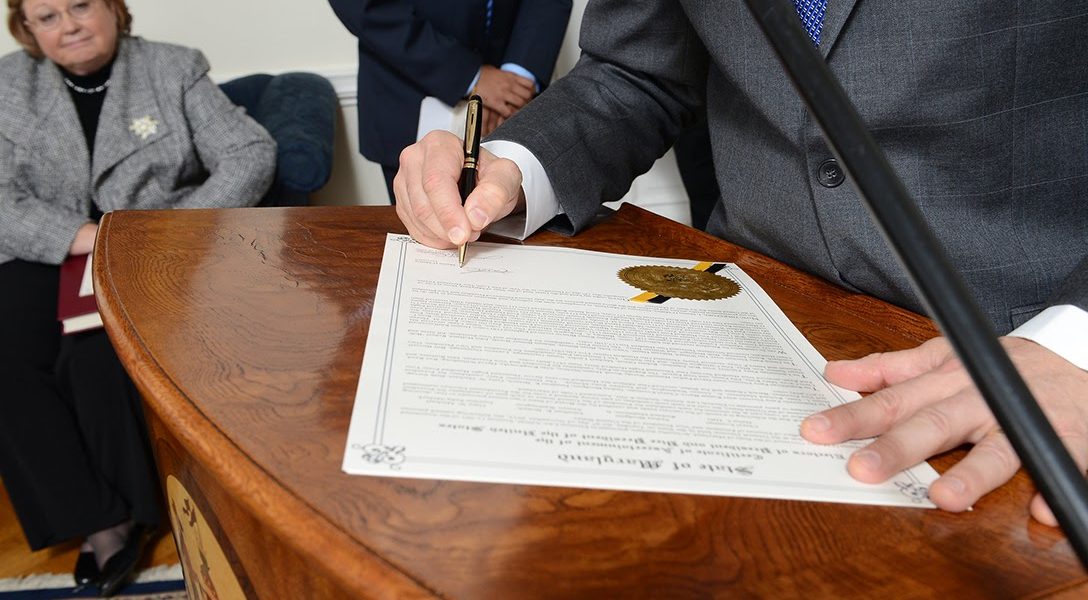 An elector certifies his vote during the 2012 meeting of the electoral college at State House, Annapolis, MD. Photo credit: Maryland GovPics / Flickr (CC BY 2.0)
Elections

When the Electoral College convened following the 2016 election, Peter Chiafalo, Levi Guerra, and Esther John decided not to vote for Hillary Clinton. They voted for Colin Powell instead. The state of Washington fined them $1,000 each for that decision and they went to court. The Supreme Court will hear their appeal April 28 and issue its decision by the end of the present term, in June, well in time for the 2020 election

That ruling could determine who will be sworn in next January.

Chiafalo, Guerra, and John, together with Micheal Baca from Colorado, are branded with one of the more colorful legal terms to go before the Supreme Court. They are “faithless electors,” members of the Electoral College who refuse to vote for the presidential candidate they signed a pledge to vote for.

Everyone knows the Electoral College is pretty much just a big constitutional joke, as political as the Buckingham Palace guards are military.

By its ruling in this case, the court will decide whether electors are rubber stamps who symbolically transmit their state’s election totals to Congress — or are living, breathing people who can individually pull the plug on the democratic election of the president.

Either way, it’s likely that the court’s decision will light a fire under perennial efforts to reform — or abolish — the anachronistic Electoral College.

The case is actually two cases combined for argument. One is an appeal from a decision by the federal Tenth Circuit Court of Appeals in Denver. Baca and two other Democratic functionaries were named as presidential electors by the Colorado Democratic Party after Hillary Clinton won the most votes in the state. Colorado requires its appointed electors to sign an oath pledging to vote for the candidate of the party that appointed them.

When the Electoral College voting took place (on the first Monday after the second Wednesday in December, following a presidential election), instead of voting for Clinton, Baca voted for John Kasich. The Colorado secretary of state removed Baca from his position and appointed a replacement, who voted for Clinton.

Two of Baca’s fellow electors, who had said they would do the same as he had done, were intimidated into voting for Clinton.

All three sued. Baca’s fellow electors lost. However, the Tenth Circuit ruled that a state’s authority over electors ended with their appointment and that the constitution gave individual electors the right to exercise their discretion in casting their vote.

It was too late to give Baca his vote back, or for John Kasich to receive a vote for president — but the court said Baca’s constitutional rights were violated. He was awarded nominal damages.

Things turned out differently in the state of Washington. That state’s law not only required electors to vote for their party’s candidate but it imposed a $1,000 fine if they failed to do so. Nonetheless, instead of voting for Clinton, electors Chiafalo, Guerra, and John voted for Colin Powell for president. (They voted for three different persons — women — for vice president, including Elizabeth Warren.)

Despite their disobedience, their votes were transmitted to Congress together with the rest of the nation’s electoral votes, and Congress recorded three presidential votes for Powell. The faithless electors immediately filed suit in the Washington courts, where the case worked its way to the state’s Supreme Court. Unlike the Tenth Circuit in Baca’s case, the Washington Supreme Court ruled that the state could dictate how its electors voted. The court said the Constitution gives states the absolute authority to decide how to appoint electors, and that authority includes the right to compel them to vote in a specific manner.

This kind of conflict between lower court decisions is the top reason for the Supreme Court to accept a case. That is just what happened. The court accepted the Washington electors’ appeal and the State of Colorado’s appeal. The two appeals were combined into one case.

All of a sudden a Supreme Court case about a relatively obscure constitutional anachronism can be seen as a cruise missile aimed straight at what the rest of the world views as basic democracy, you know, that whoever gets the most votes wins the election.

So why is this case such a big deal? Everyone knows the Electoral College is pretty much just a big constitutional joke, as political as the Buckingham Palace guards are military. Well, no matter which way the Supreme Court rules — and for various reasons the outcome is difficult to predict — future presidential elections will be shaped by it.

If the court decides that states have no power to compel electors to vote for the candidate they were appointed to support and that electors are free to vote however they choose, then presidential elections could become two-stage events, with the actual public voting only a preliminary to the main event: a second campaign to influence the 538 members of the Electoral College.

In a close election, where a handful of electoral votes one way or the other could tip the balance, what would it cost to sway an individual elector’s vote. A million dollars? Ten million? That kind of money is chicken feed in today’s politics.

What about public pressure on electors, perhaps a campaign by hundreds of thousands of residents of the elector’s state to get him or her to change a vote? Or what about some postelection event changing an elector’s mind? A revelation of a “grab-them-by-their-p*ssy” tape? Or a stock-market crash caused by a stupid presidential tweet? Or a mental lapse raising suspicion of impending Alzheimer’s? Could any of those convince a handful of electors to change their votes?

Sound far out? In fact, the electors in the present Supreme Court case were part of an organization called the Hamilton Electors. Their plan was to persuade enough electors to refuse to vote for either Clinton or Trump to the point where neither received a majority of electoral votes. In such a situation the election is thrown to the House of Representatives, which then elects the next president itself, with each state having a single vote. California’s 39,937,489 citizens would have the same vote for president as Wyoming’s 567,025. Republicans presently hold a majority of representatives in 26 states.

Public voting could become advisory only. What would that say about the state of our democracy?

There is already a movement to do an end run around the Electoral College by states signing on to the National Popular Vote Interstate Compact, an agreement that state legislatures will compel their appointed electors to vote for whichever candidate receives the most popular votes nationwide. Does this sound unlikely?

The Electoral College Is an Undemocratic Mess

To date, 16 states and the District of Columbia have joined the compact; collectively, these jurisdictions control 196 electoral votes. By its terms, the compact goes into effect when a majority of states’ electoral votes — 270 — sign on. The bill has passed at least one chamber in nine additional states with 88 more electoral votes. It could happen. If the Supreme Court allows states to compel electors’ votes.

Depending on your view of democracy, that is either a good thing or a bad thing.

On yet another hand, however, should the Supreme Court rule that states have complete authority to direct their electors how to vote, how else might they compel their votes? California’s legislature passed a law last year — struck down by its Supreme Court — requiring presidential candidates to disclose their past five years’ tax returns. The California Supreme Court said states cannot impose restrictions on presidential candidates other than those in the Constitution: age, natural-born citizenship, and residency in the US. New York and New Jersey have passed similar laws.

But if states can direct how their electors vote, they should be able to require them to vote only for candidates whose tax returns they have examined. That’s a restriction on electors, not candidates.

That sounds good. But once this door is opened, what else could be expected to slither through? Is it beyond possibility a state would require its electors to pledge to vote only for candidates who have taken an oath to end abortion? Or support school prayer? Or build a wall on the border? Can any reasonable person say a one-party state government would feel itself limited by anything other than the power to do whatever it has the power to do?

All of a sudden a Supreme Court case about a relatively obscure constitutional artifact can be seen as a cruise missile aimed straight at what the rest of the world views as basic democracy — you know, that whoever gets the most votes wins the election.

Harvey A. Schwartz is a retired Boston civil rights attorney. He has argued two civil rights cases before the US Supreme Court. His novel Never Again describes a frightening scenario in which something similar to the Nazi Holocaust happens in the near future in the US.