A coalition of faith-based leaders, the League of Women Voters, and the NAACP gather July 19, 2021, at the Texas Capitol prior to a special summer session. Photo credit: © Bob Daemmrich/ZUMA Press Wire
Elections

Texas is in political chaos. The fastest growing state in the union is completely ruled by Republicans in all branches of state government, and as such, the Democrats of the state have been pulling every trick in the book to delay and deny legislation designed to cement GOP power there.

Republicans, including Gov. Greg Abbott, have pushed back against these antics with arrest warrants and vetoing funding for the state Legislature. This tit-for-tat is taking place just as the state buckles into redrawing the maps for voters; Texas has a history of gerrymandering throughout the decades.

Experts are warning that throughout the US, the political system continues to be biased in favor of the Republicans, more and more as time goes on. This is partially because rural votes count more in elections than urban votes, and rural votes tend to lean more conservative.

Even in densely populated areas, gerrymandering makes it easier for Republicans to win control of Congress by redistricting congressional maps. For example, in Texas, Republicans are expected to divide the heavily liberal population in Austin into five sections and then send those voters to rural consverative areas, where their votes will be diluted and overpowered. The two new seats they’ve acquired are due to a burgeoning Latinx population and an increasing Asian population, but it is highly unlikely those populations will be represented.

“[Gerrymandering] creates a situation where the Republicans are able to win by focusing entirely on their base. And they’re fearful that their base is going to keep shrinking. And so they seem to be taking lots of steps in order to stay in power without actually having to win a majority of the vote,” said Bernard Tamas, associate professor of political science at Valdosta State University in Georgia.

Another tactic Republicans are using to stay in power is enacting calculated voter suppression laws, which are emerging with alarming prominence. Based on Republicans’ unsubstantiated claims of election fraud, 18 states have enacted 30 laws that put up unnecessary barriers, making it more difficult for voters to have their constitutionally given voices heard. These barriers include mandating photo ID, limiting voting hours, and eliminating the majority of mail-in ballots, drop boxes, and drive-thru voting, among other intentionally implemented obstacles. If all these laws were to pass, it could very well undermine the democracy in our country by significantly altering the voices who are able to say who represents us.

In Texas, in addition to gerrymandering, voter suppression bills are being forwarded after three Democrats broke ranks with their party and returned to the chambers. The party members had fled for 38 days to prevent the vote.

“There’s a legitimate, deep concern among political scientists that we could be heading in an authoritarian direction. And voting suppression is one of those threats, ” Tamas said.

“We cannot rely on such extraordinary occurrences like the 2020 elections. We must build our systems so that eligible voters do not face unnecessary barriers and expenses in order to be able to stand up for the candidate they think is best.” — Ami Gandhi, senior counsel at Chicago Lawyers’ Committee for Civil Rights.

Elections in America are often alarmingly close, which means even shaving off a marginal number of votes could change the course of the country long term.

Lawmakers and voters need to act now and take voter suppression laws extremely seriously before people’s rights begin to be chipped away, according to Ami Gandhi, senior counsel at Chicago Lawyers’ Committee for Civil Rights. “Increased voter suppression tactics and a worsening legal climate for being able to enforce voting rights will present some barriers that are so high that they will completely block some of our most vulnerable and disenfranchised community members from having a voice.” 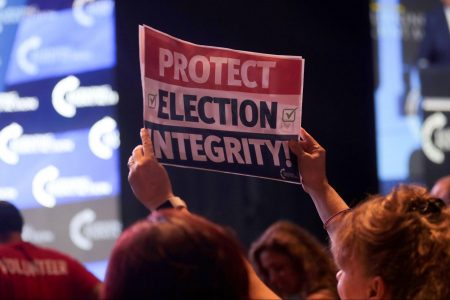 These Republican-written voter suppression laws target and disproportionately affect people of color. Although it is unclear whether or not these laws were contrived with racist intent, given that people of color are historically more likely to vote Democrat, their partisan nature cannot go overlooked.

For example, in Texas, 53 percent of drive-thru ballots came from Black, Hispanic, and Asian voters, according to the Texas Civil Rights Project, making it no coincidence that Republicans in Texas are attempting to eliminate drive-thru voting for future elections altogether.

Other obstacles, such as long voting lines, disproportionately affect people of color with jobs and families who are unable to wait in line for eight hours on a given day. The Brennan Center of Justice reports that Black and Latinx voters generally face longer wait times at poll places than white voters.

“Those barriers that each one on their own may seem insignificant or like something that a person could overcome, when added up can make the difference between whether a citizen is able to exercise their right to vote or not,” Gandhi said. “And there’s no shortage of motivation among eligible voters of color.”

Voter suppression laws were notable in the Jim Crow era, with literacy tests, poll taxes, grandfather clauses, and felony disenfranchisement. The Voting Rights Act of 1965 outlawed these practices, but the damage of 2013’s Shelby County vs Holder, which eliminated a key provision that held lawmakers with a history of discrimination accountable, put the Voting Rights Act under threat and set back the country’s progress by generations, resulting in what we are seeing today in states such as Texas, Arkansas, and Kansas.

Eligible voters of color have grown significantly in the US. From 2000 to 2018, the eligible voter population increased by 40.3 million. Back, Hispanic, and Asian voters accounted for 76 percent of this growth.

As far as voting in 2022, Republicans could easily be able to eliminate enough votes with suppression laws that they could be elected into various positions of power without properly representing the true preferences of voters nationwide, according to Tamas. It’s a concept that directly contradicts the definition of a representative democracy, he says.

However, some activists say Republican efforts to silence the vote may have counterproductive effects in the sense that it makes voters more aware of their oppression, igniting them to defy authority and fight for their rights. “The Democrats are doing the right thing by challenging this. It actually galvanizes people: ‘How dare you take away my vote, I’m going to vote anyway regardless of what you do,’” Tamas said. “Democrats are responding in outrage, it highlights the problem, and it kind of keeps the states limited in what they can do.”

Given the record turnout in 2020 in the presidential election, it is apparent that people in the US found it very important to vote that year, in contrast to 2016, when many Democrats chose not to vote because they simply assumed Clinton would win, and did not think it was worth the effort. The 2020 election was an unprecedented scenario, not necessarily an indicator of future patterns.

“We cannot rely on such extraordinary occurrences like the 2020 elections. We must build our systems so that eligible voters do not face unnecessary barriers and expenses in order to be able to stand up for the candidate they think is best,” Gandhi said.