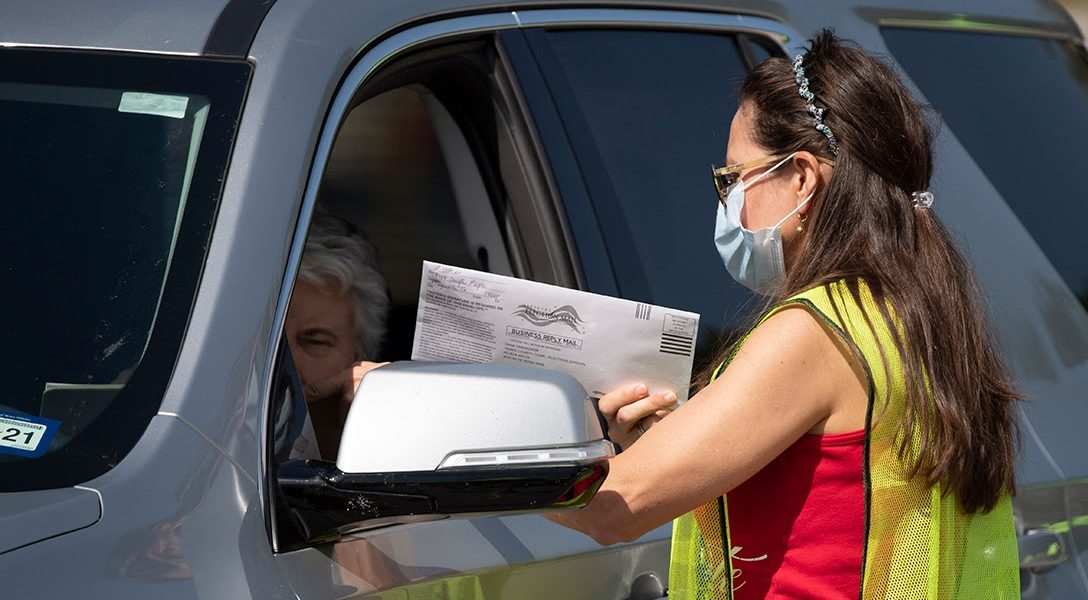 Travis County, TX, elections officials in Austin collect mail-in ballots at the only authorized facility in the county a week before early voting starts for the November 2020 elections. Voters sign a ledger and watch as their ballot is dropped into a secure ballot box on October 7, 2020. Photo credit: © Bob Daemmrich/ZUMA Wire
Elections

While young Latinx and Black voters are expected to play a large part in November’s election, voting-rights advocates in Texas say that old and new laws are suppressing their vote.

“In Texas, you can vote with your concealed handgun license but you can’t vote with your student ID,” said H. Drew Galloway, executive director of MOVE Texas, a nonprofit that has registered many voters of color. “And with 41 percent of the voters in this election being younger than 30, and 63 percent of that group being people of color, these restrictions undermine voter equity.”

Texas has a long, ugly history of disenfranchising voters of color.

Going back 100 years, the state specifically excluded Black and Mexican Americans by limiting party membership to whites so that people of color couldn’t participate in primaries, and mandated literacy tests in English.

“It was just 60 years ago that Texas was still using poll taxes and literacy tests,” Galloway noted. “And so Jim Crow didn’t go away. Jim Crow went to law school in Texas and showed back up in the legislature.”

While the Voting Rights Act of 1965 outlawed many discriminatory practices, advocates say that new waves of voter suppression have emerged, including strict Texas voter ID laws passed by the state Legislature that make it harder for students and people of color to vote. This was made possible by the US Supreme Court in Shelby County v. Holder seven years ago, which struck down portions of the Voting Rights Act. “We Serve White’s Only No Spanish or Mexicans” sign outside a Texas Restaurant, from 1949. Photo credit: Bathtub Barracuda / Wikimedia (CC BY-SA 4.0)

Now making its way through the courts is what voting-rights advocates call another blatant attempt at voter suppression in Texas, this one impacting seniors: Republican Texas Gov. Greg Abbott’s order on October 1 to limit ballot drop box locations to one per county.

“We were happy that the governor extended early voting. But when he made a proclamation to have one drop off site per county, we knew that it was voter suppression,” said Grace Chimene, a retired pediatric nurse practitioner who is the president of the League of Women Voters of Texas. “This affects the elderly and people with disabilities.”

The governor’s order will impact large urban areas like Harris County, which has 4.7 million residents, and is more populous than 25 states and the District of Columbia. Roughly 44 percent of Harris County, which includes most of Houston, is Latinx. Another 20 percent is Black.

For Chimene, this reminds her of how many people will be put at risk waiting in a long line to drop off their ballots — Harris County also has the most COVID-19 cases (almost 155,192) and deaths (2,735) in Texas.

“The governor did not mandate face masks at the polling stations. So that means those election workers are working all day long with other people who might not be wearing a mask,” she said.

“To me, as a nurse, it’s horrifying that they would put those people in jeopardy like that.”

The League is a plaintiff in the court case against the governor’s order and has joined other voting-rights organizations in taking the Texas state government to court.

A few months back, MOVE Texas was similarly a plaintiff in another lawsuit against the state. It sued to expand the opportunity to vote by mail to all registered voters during the COVID-19 pandemic.

Unlike some other states, Texas limits voting by mail to people aged 65 and over, those with a physical disability or sickness, and voters who are in jail or temporarily away from home.

The Texas Supreme Court ultimately ruled against allowing mail voting for everyone. But it allowed people with underlying conditions — which still excludes many young voters — to claim a disability and vote by mail.

While this opened a path for more Texans to vote by mail, the Texas attorney general issued a memo that holds civic organizations liable if they convince voters to claim disability during COVID-19 to vote by mail.

The Creation of a Two-Tier Democracy

A 2014 report from the Presidential Commission on Election Administration concluded that voting should take no longer than 30 minutes.

But this does not hold true for many Black and Latinx voters in Texas (and other states) who live in communities with fewer electoral resources.

“Every time there is a shortage of poll workers, and they cannot staff all of their polling locations, the first places they close happen to be in Black and brown communities,” said Angelica Razo, Texas state director of Mi Familia Vota, a nonprofit that engages Latinx voters.

“The only way for us to open up democracy is by winning over and over again at the county level.”

Razo says that a false narrative has been created about people of color not voting. And it has to be debunked so that democracy can become genuinely inclusive.

“Our election process has intentionally been really hard for certain people to access,” she said.

“When you look at the people who do not have access to it, it tends to be people of color, lower income, lower education, folks who are first and second generation immigrants.”

By comparison, Razo describes traditional voters as older and white, with higher incomes and education levels.

As demographics move toward a future nonwhite majority, she says that the voting system and processes should also reflect that diversity.

“Traditional voters have found themselves in positions of power,” Razo said.

“And whether it’s intentional or not, they don’t have the same perspectives about the challenges that our [Latinx] community faces.”

Finding a Solution at the County Level

As voting-rights organizations pool their resources and strategies to fight voter suppression, some advocates remain steadfast in the conviction that change will come through voter education.

“One of the biggest challenges for voters is misinformation. People have a difficult time getting facts. So we try to become a trusted resource for voting information,” said Chimene. “We’re going to push through with voter education so that they can find the best path to vote.”

For others, the path to change will come through more county wins.

“The only way for us to open up democracy is by winning over and over again at the county level,” said Galloway.

“The laws on the books support voter suppression. And we need to make more and more voices heard in every election.”