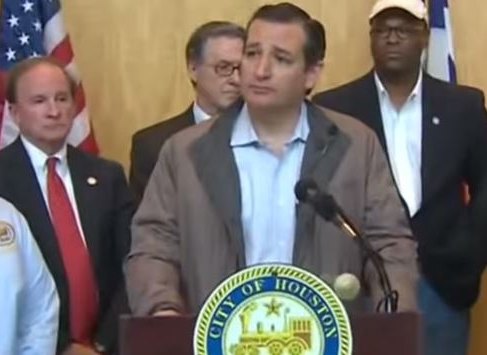 “The federal government’s role, once the Governor declares a disaster area and makes a request, I am confident that the Texas congressional delegation, Sen. Cornyn and I, and the members of Congress both Republicans and Democrats will stand united as Texans in support of the federal government fulfilling its statutory obligations, and stepping in to respond to this natural disaster.”

However, remember Hurricane Sandy? Cruz wasn’t convinced on any federal help then:

“Two-thirds of this spending is not remotely “emergency”; the Congressional Budget Office estimates that only 30% of the authorized funds would be spent in the next 20 months, and over a billion dollars will be spent as late as 2021.

This bill is symptomatic of a larger problem in Washington – an addiction to spending money we do not have. The United States Senate should not be in the business of exploiting victims of natural disasters to fund pork projects that further expand our debt.”

And just to quash any idea that Cruz was right in his opposition then as opposed to now, read this except from Forbes:

“However, as it turns out, the pork portions of the Senate bill were not earmarked to benefit Democratic members of the upper chamber of Congress… The answer can be found in a quick review of the states that are set to benefit from the Senate’s extra-special benevolence—states including Alabama, Mississippi, Texas and Louisiana.”