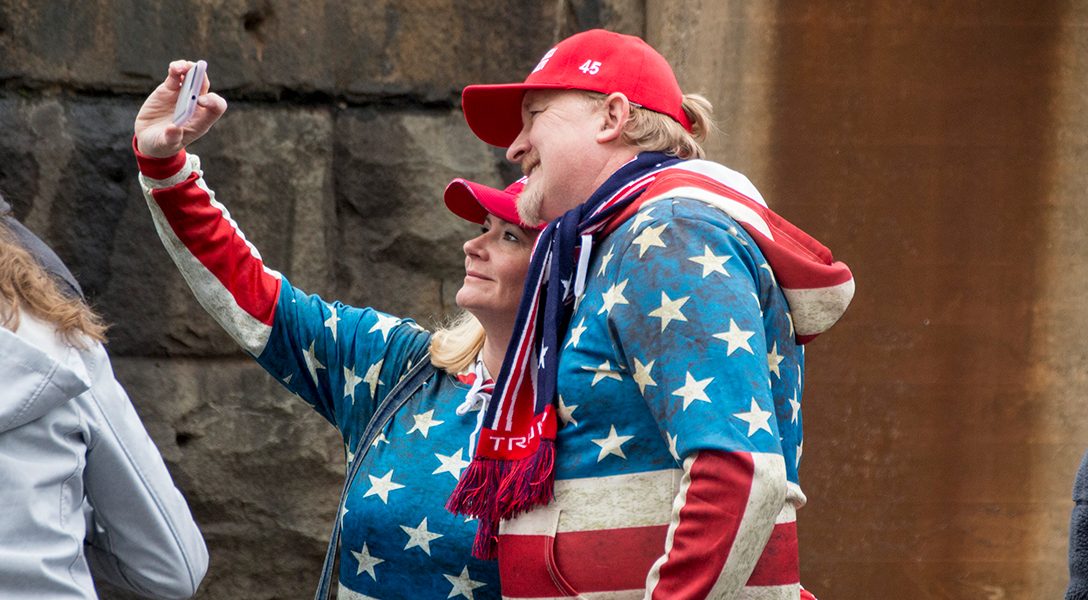 It was 4:30 a.m., but people could not sleep. We were making final preparations to drive from Suffolk County, Long Island, down to Washington, D.C. for the inauguration, but it felt like we were going to Disneyland. Excitement filled the bus.

“A great day for America.”

“Did you see my sign on my trailer? Did you see it? Veterans for Trump?”

“I’m recovering from chemo, but I couldn’t miss it.”

We — the old, the young, families, couples, friends, the cancer-ridden, and one WhoWhatWhy reporter — set off for the five-hour ride.

In the darkness of the highway, I talked with these Trump supporters in the hope of gaining a good understanding of their views. According to polls, President Donald Trump has one of the lowest transition approval ratings in modern history, about 50% unfavorable and 42% favorable.

Outside this bus, driving down the East Coast through one blue state after another, the majority of people view Trump as a misogynist, a liar, a disgusting and conniving man who will manipulate in order to get what he wants. Inside, he is heroic, honest, tough, skilled, and patriotic.

Julie, the woman recovering from chemotherapy, came to the US from Peru when she was 16. She used to chair the Republican committee in her district when she lived in Florida. With her accented English, she said she was pro-immigrant, but she was also for immigrants learning (just like she did) all the questions and attitudes necessary to gaining citizenship.

She did not go through Obamacare for her insurance, so she is not worried about losing her cancer treatment. She also hoped that Trump would do something for the impoverished of the nation, saying “If Trump can do things for the inner city, Blacks and Latinos, that will clinch everything [for me].”

A few rows up sat hearty Long Islanders Chris and Greg, friends in their thirties who had rolled up to the bus parking lot in a massive black pickup truck with tinted windows. Greg was very clear about his position.

“During Obama, I was never a ‘not my president’ guy.” People should come together and stop acting childish, like rioting, because America is too valuable for that. If people are still jumping over fences and risking everything to come here, that tells me something.”

Greg voted for Trump because “He’s a businessman. You hear how a businessman talks, that’s how Trump talks.” He viewed Trump as a straight shooter, who will say what needs to be said, even if it sometimes goes too far, because what is important in the end is “getting the job done.” Chris nodded along.

Joe was with his daughter, who wore a red hat with “USA” blazoned on the front. While she leaned into the window and tried to rest, Joe said he was tired of Obama’s “race-baiting, and eight years of doing nothing.”

One man was terse. “Homeland security, and get rid of Obamacare.” He turned away and stared out the front of the bus, looking like he was angry at the bus driver for choosing the slower route to Washington, motioning every so often with his hands.

I wanted to find searing intelligence on this bus. Or even a regular Joe who shrugs his shoulders when he does not know the answer. I did not. What I found were people who were, really, just people. And if there is anywhere to point when we ask (on either side of the political divide) “How did we get here?”, it is here. People love narratives. Heroes, villains, underdogs, obstacles to overcome, and a manifest destiny that carries the story, against all odds, to its climactic conclusion. This is what I saw on the bus. At times this was explicit, such as a man wearing a lanyard with a photo of Trump that read “A hero will rise.” Others were subtler, like Milton.

Milton sat next to me for the ride. A business banker in his mid-forties from Queens, I asked him what he liked about Trump. He, along with everyone else on the bus, noted how honest a guy he was. We went back and forth, which led to this exchange:

“So you agree that Trump says outrageous things that could mislead lots of people?”

“And that doesn’t bother you?”

“But he gets caught in lies all the time.”

It was a weird point to stop. Oh, all those terrible things he said? Doesn’t matter. Milton wanted a champion; he wanted a hero to rise, skeletons in (or out of) the closet be damned.

In their dress and demeanor, they appeared to be normal, solid people. Smart, jovial, not looking to blame or hate, people who want to solve the problems that America has. Milton reiterated the line,

“Trump wasn’t bought. He doesn’t need the job. All these other politicians are looking after their careers, but Trump just wants to do good for the country.”

In line waiting to enter the National Mall, I talked with two African-Americans from New York City who wore Trump beanies. They were up to snuff on any given issue, spoke with distaste of the Clinton Foundation and with glee at its shutdown, and liked that Trump is not part of “the system.” When I mentioned that Trump has been hooked into the business elite for most of his life, I am sure you can guess what they said: “Doesn’t matter.”

We are in a story. And stories are not won or lost by sober reflection and rational thought. They are won by pressing the right emotional buttons at the right times to make things feel right.

How did Trump get so big? Why is he the hero of my fellow bus riders?

Because he is the badass underdog of the story who lets it all out and does not care if you cannot deal with it. After eight years of pragmatic Obama sitting next to us at the bar saying that life is shades of gray, Trump talking in black-and-white certitudes is the deliverance the American faithful wanted.

On the way back to the bus after the festivities, a college-age woman chanted “Daddy Trump! Daddy Trump!” She and her compatriots do not want pragmatic dad, they want badass dad.

We rode back to Long Island that evening, again in darkness, and again, no one could sleep. The roars of triumph were too loud to even try. Milton kindly offered me a ride back from Long Island to New York City. He said he was optimistic, and glad that he went.

Chris and Greg said that it “felt great to be a part of history.” This was despite the fact that none of them actually saw the inauguration. Security was so tight that only three or four of the bus riders got onto the National Mall. While waiting in line, a few of us watched the livestream on our phones, our legs weary from standing for two hours and still nowhere near the checkpoint.

As Milton drove away and I walked down the dingy stairs of the New York City subway on my way home, I wondered whether anything could change his mind about Trump, or if anything could change the minds of those hundreds of thousands of Trump protesters.  And if neither side is willing to give an inch, where is this going to end?