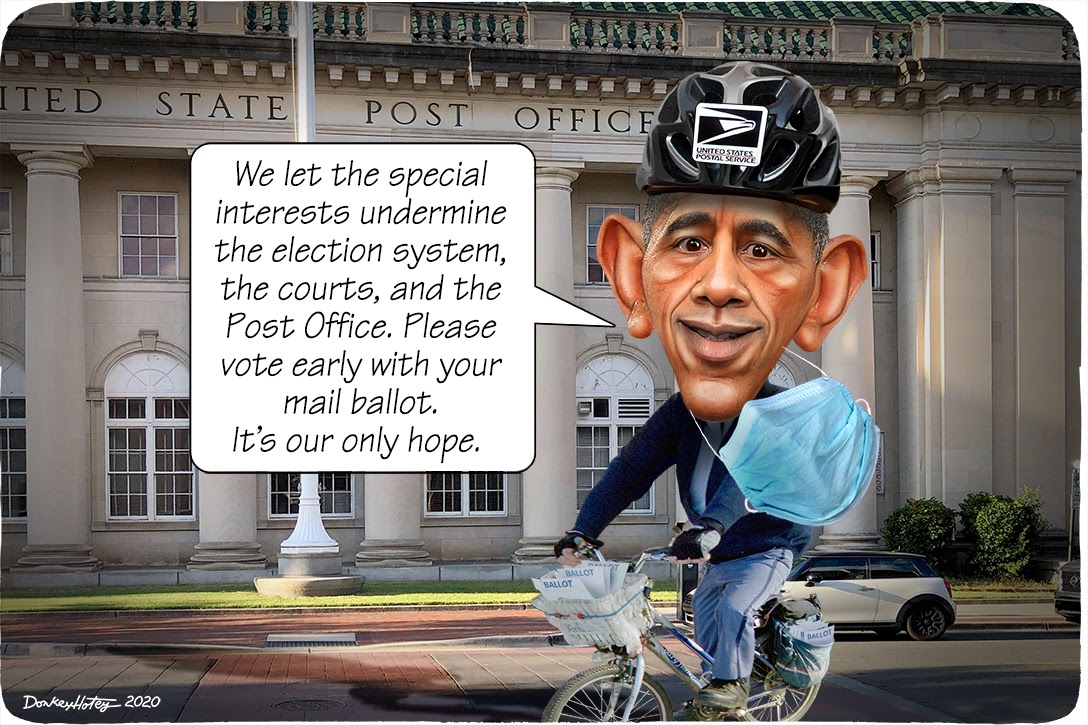 In July, Barack Obama tweeted, “Voting by mail shouldn’t be a partisan issue — especially during a pandemic. Everybody should be able to request an absentee ballot, and make their voice heard in every election.”

This tweet is in the best tradition of wishful liberal thinking, but it begs the question: Why should the debate over the way we vote not be partisan? Obama’s tweet, in fact, recognized that the discussion is already highly partisan. Perhaps there is nothing unusual about that.

The tweet might have been inspired by research showing that mail voting, on average, has no partisan effect on election results. But Obama clarified the tweet by expressing a simple ideal of participatory democracy: “Everybody should be able to… make their voice heard in every election.”

The point is that all Americans should be included in the democratic process, and that means reducing the obstacles to casting a ballot and making sure voting is easily accessible. According to the National Conference of State Legislatures, no-excuse absentee voting or all-mail elections are already used in 34 states plus Washington, DC. Obama’s question is: why not extend the policy to all 50 states, especially during a pandemic?

Independent of partisan considerations, it is fair to say that there are advantages and disadvantages to voting by mail. It’s no doubt highly convenient for voters, but mail voting can also be susceptible to administrative errors, delivery delays, and difficulties for voters in complying with detailed instructions and requirements. These types of issues can result in large numbers of votes not being counted. And that’s not to mention the allegations of fraud that Republicans keep trumpeting.

The fact is that fraud involving mail ballots is extremely rare. When it actually does occur, it is relatively easy to detect, because there is a paper record of all votes.

That has not kept Republicans from mounting a bitter campaign against expanded mail voting during this pandemic election. In Texas, for example, Republicans have fought tooth and nail, at the threat of criminal prosecution no less, against allowing absentee ballots for any voter who fears voting in person. Clearly we’re not living in Obama’s ideal world of nonpartisan election rules; we’re in Donald Trump’s ideal world now, where anything is fair game. Election laws and procedures were already under partisan attack well before Trump came into office, but these attacks are now spiraling completely out of control.

Why is this? How did the United States get to the point of allowing blatant and overt partisan manipulation of the rules and procedures for its elections? How does the system of election law and policy in the US allow for this state of affairs?

Our basic understanding of democracy is that the will of the people, expressed through their votes, should determine who manages the government. It offends a sense of fundamental fairness to let one party set rules that disadvantage its opponent. If the rules are biased — if the game is fixed — the outcome of the election will not be considered legitimate.

The undercurrent in the ongoing partisan battles over voting rules is simple to follow: Democrats generally favor making voting more accessible, while Republicans generally favor more restrictive access. This is an observable fact.

The question is, could Republicans really believe that democratic elections are more legitimate, or somehow more effective, when voting is less accessible and fewer citizens participate? Or is it simply that lower turnout helps them win?

Conservative political theorists and pundits do sometimes make principled arguments for limiting access to the democratic franchise, and this position has of course a long, if highly contentious, history. If Republicans truly believe in limiting access to the franchise as a matter of principle, then they should make that argument openly. At the same time, Democrats must be prepared to explain more clearly why they believe that making voting more accessible and increasing participation yields a more legitimate democratic election. The bottom line is that it’s better to have an open discussion of the values that inform our assumptions and beliefs about voting than to allow these ideas to lurk as background noise making public discourse more difficult.

In reality, however, we must admit that it’s natural to expect both major parties to do what they can to win elections. But how far should this natural seeking of a competitive edge be allowed to go? Should politicians be allowed to enact or change voting laws simply to gain electoral advantage? For example, should a party in power be permitted to limit access to mail ballots if it  believes — rightly or wrongly — that widespread voting by mail would favor the opposing party?

Our basic understanding of democracy is that the will of the people, expressed through their votes, should determine who manages the government. It offends a sense of fundamental fairness to let one party set rules that disadvantage its opponent. If the rules are biased — if the game is fixed — the outcome of the election will not be considered legitimate.

This might seem obvious, but it’s unclear if Republicans believe this as a matter of principle. In fact, some may see the power to manipulate electoral rules as a legitimate part of the political process. This was apparent in Republican efforts to preserve the right to gerrymander congressional districts, and even more so in the Supreme Court’s Rucho v. Common Cause decision, in which the conservative majority held that judges are constitutionally prohibited from interfering with state legislators’ efforts to game the system.

The 7th Circuit’s Judge Frank Easterbrook made the issue even clearer when he upheld Republican-imposed limitations on voting access in a recent Wisconsin case. Judge Easterbrook, a Reagan appointee, stated that, as a matter of law following the Rucho decision, “legislators are entitled to consider politics when changing the rules about voting” (emphasis in original).

Voting is a partisan issue because the US Supreme Court has abdicated its responsibility for protecting democracy in America.

These recent cases merely confirmed what has long been the status quo, which is that partisan politicians in state legislatures have broad power to manipulate election rules with very little oversight from the federal judiciary. The situation was exacerbated by the Supreme Court’s 2013 Shelby County v. Holder decision, in which Chief Justice John Roberts led the conservative majority in gutting the Voting Rights Act and limiting the power of Congress to ensure free and fair elections. In fact, the Court has repeatedly failed to subject laws infringing on the right to vote to the same high level of scrutiny that it gives to other fundamental rights under the Constitution.

In short, partisanship has become pervasive in US election law and administration because US courts have explicitly allowed it to be so, effectively encouraging it. Partisan politicians, Republican or Democrat, aren’t the real problem; they’re just doing what should be expected with the latitude they’ve been given. The fault lies with the judiciary, which has almost completely forsaken its job of ensuring basic equality and fairness in electoral rules and procedures — not to mention its role in encouraging participation. Voting is a partisan issue because the US Supreme Court has abdicated its responsibility for protecting democracy in America.

That’s not the end of the story, though. As Republican marketing experts are well aware, it doesn’t make a good impression to be seen as openly gaming the system, even if you have a legal right to do so. Manipulating the rules is more palatable if done under the pretext of trying to eliminate fraud — even when fraud isn’t the real concern.

Election security is and should be an urgent concern for everyone, regardless of political affiliation. No one’s legitimate interests are served by a system vulnerable to fraud. But when accusations of fraud are bandied about as pretexts for partisan rule manipulation, the groundless allegations could devolve into a fundamental challenge to democracy.

Of course, if one’s intention from the start is to undermine the legitimacy of an election in order to challenge an expected defeat — both in the courts and in the minds of one’s supporters — then stirring up suspicions of potential fraud could make strategic sense.

It shouldn’t be surprising that allowing partisanship to run rampant through a lack of judicial commitment to enforcing fair election rules could pose a threat to democracy. Americans are losing what little trust they had in elections, in the Supreme Court, and in government in general.

What can be done? The situation is dire, but relief could be close at hand. The major voting rights cases at the Supreme Court in recent years have been 5-4 decisions. The Court is therefore just one justice away from a new liberal majority ready and willing to provide stricter voting rights protections and to rein in partisan manipulation of elections. That’s why voting in the upcoming presidential election is so crucially important for anyone who cares deeply about election integrity and voting rights.

There have also been renewed calls lately for a new constitutional amendment guaranteeing the right to vote. An amendment to the US Constitution would indeed be ideal; however, passing one is extremely difficult in practice. Also, the truth is that the legal principles for robust protection of voting rights already exist in the Supreme Court’s constitutional jurisprudence; they have just been relegated to minority opinions.

Furthermore, if Democrats can win both houses of Congress and the presidency, there could be new legislation on voting rights. The current House has already passed major pieces of legislation providing new federal standards for voter registration and redistricting, as well as a new formula for restoring parts of the Voting Rights Act that were struck down by Shelby County.

However, even these legislative initiatives may not be enough. In the so-called laboratories of democracy, state control over federal elections has been an experiment gone wrong from the beginning. It’s readily apparent that some states cannot be trusted to fairly administer elections. Luckily, the founders provided an explicit remedy in the constitutional text, which states that “Congress may at any time make or alter [State] Regulations” for the administration of federal elections (Article 1, Section 4).

The fact is that Congress has much broader power over federal elections than it has exercised to date. Its power, in fact, is much broader than what is proposed in recent House bills. Even conservatives on the Supreme Court have expressly agreed with the principle that Congress has final authority over the rules for its elections, up to and including “authority to provide a complete code for congressional elections.”

Congress might also adopt a new Voting Rights Act establishing review procedures for state election laws across the entire country, instead of focusing only on jurisdictions with a history of discrimination. In the long term, Congress could and should establish a professional, nonpartisan agency tasked with fairly administering elections throughout the United States. This is the solution used in just about every established and developing democracy in the world.

Reforming the entire electoral system is a tall order. Success will depend heavily on electoral victories this November, as well as the subsequent political will to effectuate major change. Obama’s recent call to end the Senate filibuster if necessary for passing new voting laws could be heartening in that regard. There may be opportunities for major electoral reform ahead. Of course, it is also possible that the partisan manipulation of elections could become even more entrenched, and that the American experiment with democracy faces an existential threat. The whole world is watching and waiting to see.

Eliezer Poupko is an Election Integrity Scholar at WhoWhatWhy. He has a PhD in public policy from the University of Texas at Austin and a JD from University of Florida.