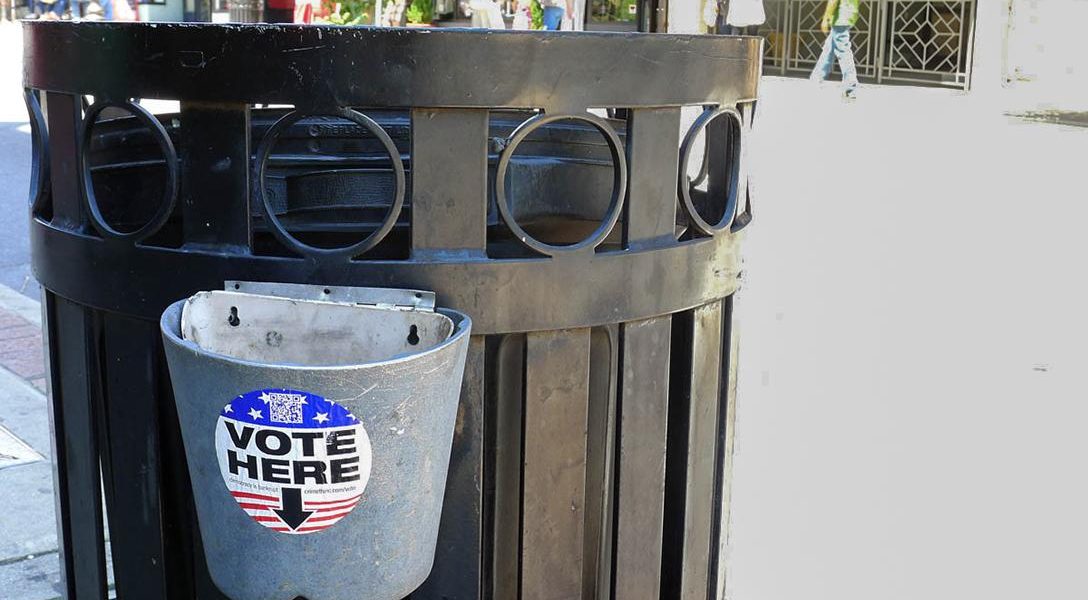 At the end of a long and contentious primary season, one thing is clear: America must undertake a lot of hard work if it wants to fix its broken  voting process.

Perhaps the most high-profile example of voting problems in the past few months came on April 19, the day of  the New York Democratic Presidential Primary. Over 100,000 voters in the New York City borough of Brooklyn were stunned and angered to find themselves de-registered on election day.

Indeed, many were forced to sign an affidavit affirming their registration to even have a mere chance of having their vote counted.

But a recent investigation into the failures of the New York City Board of Elections suggests that the problems could be bigger than just the New York primary. They are emblematic of a larger crisis affecting voting in the country, one that can be traced back to a controversial decision made by the Supreme Court in 2013.

Come the general election in November, that decision could be responsible for serious glitches in the voting process in a number of key states — perhaps even directly impacting the  outcome.

The discussion that follows, it should be noted,  is somewhat technical. But as we have learned the hard way time and again, it is often the “least sexy” things that end up mattering the most.

Last month, WhoWhatWhy reported on the impact that the Supreme Court case Shelby County v. Holder has had on voting access in another state, Virginia. The Court voted 5-4 to strike down Section 4(b) of the Voting Rights Act of 1965. This ended the practice of requiring voting jurisdictions that have a history of racial discrimination to get preclearance from the Justice Department before they make changes to their voting procedures. The importance of that requirement is clear in the Brooklyn mess.

New York public radio station WNYC analyzed the voting records of citizens affected by the purge and determined that, compared to whites and other minority groups, Hispanic residents of the borough were disproportionately removed from the rolls. Nearly 14% of voters in Hispanic-majority precincts were purged, compared with 8.7% of the voters as a whole in the borough. Over 15% of voters with certain surnames suggesting Latino ancestry (such as Santiago, Soto, and Vega) were purged throughout Brooklyn.

Until the Shelby County decision, the Voting Rights Act would have required the New York Board of Elections to get prior approval from the Department of Justice before implementing new standards that resulted in “inactive” voters being purged from the rolls leading up to the presidential primary.

Notably, the nullified sections of the Act required that Kings County would have had to prove that the proposed changes to voting law did not have discriminatory effect.

“You [didn’t] have to prove that it was intentional,” Richard Briffault, an expert on election law at the Columbia University Law School told WhoWhatWhy. “If you could prove they were using criteria that disproportionately affected categories of people, such as language minorities, then you’d have a basis for denial.”

After Shelby County, the hurdle for claiming discrimination in a case like this became much higher.

Section 2 of the Voting Rights Act, which is still in effect, allows the Justice Department to bring suit against an election district if there is evidence of discrimination. But in a Section 2 suit, the burden of proof is on the plaintiff there was discrimination, which can often be harder to prove. More importantly, the suit can only be filed after the election, meaning that the changes in voting procedures may already have disenfranchised some voters.

In 1989, Juan Cartagena, the president and general counsel of LatinoJustice PRLDEF, successfully argued (in the case of United Parents Associations v. New York City Board Of Elections) under Section 2 of the Voting Rights Act that a similar voter purge had disproportionately removed minority voters from New York City voter rolls, leading to reinstatement of those voters.

But unlike suits brought under the pre-Shelby law, Section 2 cases are “super expensive and labor intensive,” Cartagena told WhoWhatWhy. He described how effective the law had been in catching these problems before they happened and addressing them quickly, making it easier and cheaper for advocates, the government, and especially the voters.

But after Shelby, there is no easy way to prevent problems until after they happen.

The Need For Election Monitoring

Latino advocates were furious. They wanted to see actual election monitors, like the US sends south of the border, at home. LatinoJustice PRLDEF expressed its concerns to the Department of Justice, called on DOJ to investigate the event, and to put in place election monitors for the June 28th congressional primary.

“It is clear that there is now a concrete, fully substantiated need for increased federal oversight and monitoring of the NYC BOE after the removal of Section 5 preclearance protections from the Bronx, Kings and New York Counties following the U.S. Supreme Court decision in Shelby County v. Holder,” LatinoJustice PRLDEF wrote to US Attorney General Loretta Lynch.

The group joins Congresswoman Nydia Velazquez, a Democrat representing New York’s 7th Congressional District, which includes the neighborhoods of Sunset Park, Williamsburg, Bushwick, and East New York, all of which have large Latino populations, and were hit especially hard by the purge. Velazquez’s office wrote a letter to Attorney General Lynch asking for election monitoring of the primary on June 28th, when Velazquez would be on the ballot.

“Given the pervasive pattern of problems, it is difficult to have confidence that voters will not encounter other difficulties and barriers when heading to the polls,” Velazquez wrote.

Though the Department of Justice did not end up monitoring the congressional primary, the New York City Council sent 20 staffers to monitor polling sites in the four districts that had primaries in the city. So far, there have been no reports of similar problems marring Tuesday’s voting.

But most election districts in the country do not receive close monitoring, and without Section 5, problems of racial disenfranchisement might not be caught so easily.

The events of the New York primary caused widespread outrage not only in Brooklyn and New York state, but throughout the country, as many supporters of Senator Bernie Sanders wondered if the purge had cost them a vital primary victory. The reports of voters being unable to cast their ballots in the primary only compounded other problems, such as a highly onerous party registration deadline that prevented many voters from even being eligible to vote in the primary. Another “irregularity:” an election mailer misstated the date of the primary.

Sanders, in a speech to supporters April 19th after losing the primary to Hillary Clinton, said, “It is absurd that in Brooklyn, New York — where I was born, actually — tens of thousands of people as I understand it, have been purged from the voting rolls.” Understandably, many of his supporters feared there might have been foul play.

The New York Attorney General opened an investigation into the mess. Shortly afterward, two clerks at New York Board of Elections were suspended for their roles in the purge. WhoWhatWhy conducted its own investigation, focusing on a real-estate purchase by a noted Clinton ally that pointed towards possible backroom dealing — though we found no evidence of a connection.

The findings by WNYC further point away from a scheme by the Clinton campaign to influence the results of the election. Exit polls for the New York primary showed Secretary Clinton winning Hispanic voters in the state by a margin of 28 points, in line with the 63-37 results she received in the state as a whole. Many of the election districts with high numbers of purged voters were districts that voted strongly for Clinton, which would make purging them before the fact nearly impossible to do with accuracy without somehow knowing in advance which residents would vote for which candidate.

Even if all 122,454 of the purged voters would have voted for Sanders, which seems unlikely, Clinton’s margin of victory in the state’s primary was 247,704 votes.

But even without the voter purge directly affecting election results, 122,454 people being deprived of the most fundamental constitutional right must be taken seriously.

“It doesn’t take much to discourage voters in large masses,” Cartagena said. For many voters, getting turned away once can prevent people from coming to the polls again.

What Happened In Brooklyn

On June 7, Michael Ryan, the executive director of the Board of Elections, announced that all voters who had been removed in the purges had been reinstated. Ryan has repeatedly apologized for the purge, and told the New York City Council that there was “no explanation,” in a hearing on May 13, telling reporters “it should not have happened.”

So far there is little direct evidence that anything beyond incompetence caused the purge. The WNYC investigation that discovered the disproportionate effect on Latino voters attributed the actions of the Board of Elections to a response to a 2013 report by the New York Department of Investigation. That report characterized the Board as grievously mismanaged and especially noted its slowness in removing inactive voters from the voter rolls.

But in over-correcting for this problem, the Board violated its own rules which required notification of inactive voters before they could be stricken from the rolls.

Ryan maintains that the mistakes at the Board were more careless than malignant, and that any evidence of racial disparities was purely coincidental: the employees purged voters who had not voted recently, and more of these voters ended up being Latino.

But this only highlights the importance of the Voting Right Acts working as originally intended, with provisions designed to catch even accidental racial discrimination in voting eligibility before an election.

“If Latinos vote less often because of a history of discrimination, and so they don’t vote as often during off-year elections — if you layer on top of it a requirement that purges people from the voter registration rolls on the basis of recent participation, that’s something that might be a problem under the Voting Rights Act,” Danielle Lang, Voting Rights Counsel for the Campaign Legal Center, told WhoWhatWhy.

“The Board of Elections in the City of New York, for as many decades as Section 5 was in operation, was very adept at making sure they would get preclearance for everything,” Cartagena told WhoWhatWhy. He doubts that this kind of action would have gone unchecked by the Department of Justice before Shelby County.

But given the current gridlock on Capitol Hill, the chances for congressional action are virtually nil. The few corrective amendments that have been proposed so far have gone nowhere.

“Voting is too precious,” Cartagena of LatinoJustice PRLDEF said. “We have to recognize the investment of both resources and effort in preserving this particular right. It’s not like anything else.”

Both the 2000 and 2004 presidential elections were decided by margins of under 150,000 in crucial swing states (Florida and Ohio, respectively). To repeat: the Brooklyn voter purge affected 122,454 voters. You do the math.