Stopping the Next “Stop the Steal”

It’s taken a series of unfortunate events but we’ve now arrived at a terrible place where elections may be rigged without being challenged, and elections will almost certainly be challenged without having been rigged.

What’s led us to this dangerous impasse are decades of ignoring evidence that our computerized elections are vulnerable to covert manipulation; the advent of a president who saw no great obligation to leave office if defeated; and the fierce “our elections are perfect” response of the system’s defenders against the “Stop the Steal” attack.

For those among us who have made free and fair, accurate, and honest elections our focus since the wake-up call of Bush v. Gore more than two decades ago, that current predicament and its many symptoms are indeed alarming.

When Reuters recently broke the news that Matthew DePerno, the Trump-endorsed nominee for attorney general of Michigan, was suspected of leading a team that gained unauthorized access to voting equipment after the 2020 election, it was just the latest of such alleged breaches committed by supporters of Donald Trump in the name of “election integrity.”

In July, WhoWhatWhy examined a strikingly similar incident that had occurred in Coffee County, GA, in which local officials gave a private “forensic team” access that allowed them “to make a copy of the operating software [from] a computer server containing the elections management system — a system used throughout the state.”

In Colorado, Mesa County Clerk Tina Peters, under indictment for facilitating yet another such break-in, sought the Republican nomination for secretary of state, the office responsible for running Colorado’s elections. Having lost by a margin of 14 percent (more than 88,000 votes), Peters nevertheless pursued a recount. When it confirmed the exact margin of defeat (13 votes were added to the totals for both Peters and the winning candidate), Peters promptly filed suit challenging the legitimacy of the recount.

Trump may have railed with great conviction and certitude about the theft of his “sacred landslide,” but it all hit home because of the coast-to-coast quicksand under the electoral process.

In Arizona, court battles still rage as the state Senate and the Cyberninjas — the outfit it commissioned to hand-count the ballots cast in Maricopa County — continue to defy and appeal orders to turn over records of their months-long “audit,” which may also have allowed access to purportedly secure hardware and software.

Such breaches, experts have warned, may enable those in possession of the purloined information to alter tabulation processes, and thus outcomes, in future elections that employ the compromised equipment and programming.

This alarming prospect has brought to life a long-dormant dilemma: Computerized elections need tight security (e.g., inaccessible memory cards and proprietary code) but that very security in turn manifests as the nontransparency that has been jet fuel to “Stop the Steal” election deniers. And the more computerized an election is — for example, using touchscreen barcode ballot marking devices rather than hand-marked paper ballots, or equipping the voting machines with modems — the more levels of security are needed and the less transparent the whole process becomes.

This impels us to look to less computerization and stronger, more transparent processes for verification of results: open source code for the equipment; hand-marked paper ballots; uniformly mandated, rigorous, and public audits of the counts; and, following the lead of many parliamentary democracies, publicly observable full hand counts of our federal elections, which is not unduly burdensome, as there are (with extremely rare exceptions) a maximum of three such contests (president, Senate, House) on any ballot.

In the current political and cultural environment, if we don’t make these changes, we can look forward to a full-on collapse of the bedrock protocol of our democracy. We’re at least halfway there. So we’d better start thinking outside the black box.

The Eye of the Beholder

The beauty of Donald Trump’s Stop the Steal campaign — which we now know had preelection as well as post-election phases — is very much in the eye of the beholder.

It involves tremendous sound and fury but very little actual evidence; it lost in virtually every one of the scores of cases it brought to the courts, including those presided over by Trump-appointed judges and justices.

It ultimately resorted to the violence of the January 6, 2021, assault on the Capitol and Congress; and it gave rise to the serial breaches of security described above, among others.

While it may seem perplexing that anyone could find any beauty at all in this democracy-endangering spectacle, the fact is that tens of millions of voters were, and remain, smitten — along with much of the GOP, a few of whom may actually share such passion while the rest think they know a good wave to ride when they see it.

To these beholders — sincere and cynical alike — it’s not the breaches of election security or the violence of January 6, but the “fraudulent” 2020 election that is seen as endangering democracy, and the current president, and various other office-holders, who are seen as lacking legitimacy.

You can of course say that the “Big Lie” worked, and point to its gleeful amplification by right-wing media and trouble-seeking influencers. But while that’s all sadly true, to leave it there would be to miss a critical insight into why the lie worked — and into our current plight.

To the Stop the Steal faithful, Matthew DePerno, Tina Peters, the Coffee County gang, and even the Cyberninjas are heroes. They are heroes because they did what they had to do to get a glimpse of the votes that were supposedly behind the numbers that brought down Donald Trump — or at least the computer code that we’ve long been assured accurately counted those votes. Unwilling to accept defeat, Trump, and all those conditioned to the same denial, could ask one very simple question:

How do we know?

Trump may have railed with great conviction and certitude about the theft of his “sacred landslide,” but it all hit home because of the coast-to-coast quicksand under the electoral process.

How do we know? When those shocked and distressed Trump voters — at least those who didn’t just jump straight to conclusions — asked this question, the answer that shined through to them, despite the chorus of “it was perfect!” and “most secure ever!” assurances, couldn’t have been more unsettling or provocative.

The answer was: We don’t.

To hear a Stop the Stealer tell it: Everything’s tucked away, sealed up, out of view. It’s all proprietary and under the control of people — vendors, technicians, administrators, poll workers — we don’t know, and suspect we wouldn’t like if we did. Well, at least one vendor — Dominion Voting Systems, accused again and again by Trump — and everything’s really bad in all those blue cities, where who knows what may be going down!

I say “we,” meaning “they,” but also meaning “we,” because this shoe has long been on the other foot.

In the course of two decades of gathering and analyzing election data — vote counts, polls, patterns — I myself have reached that place of serious doubt and frustration over and over again: 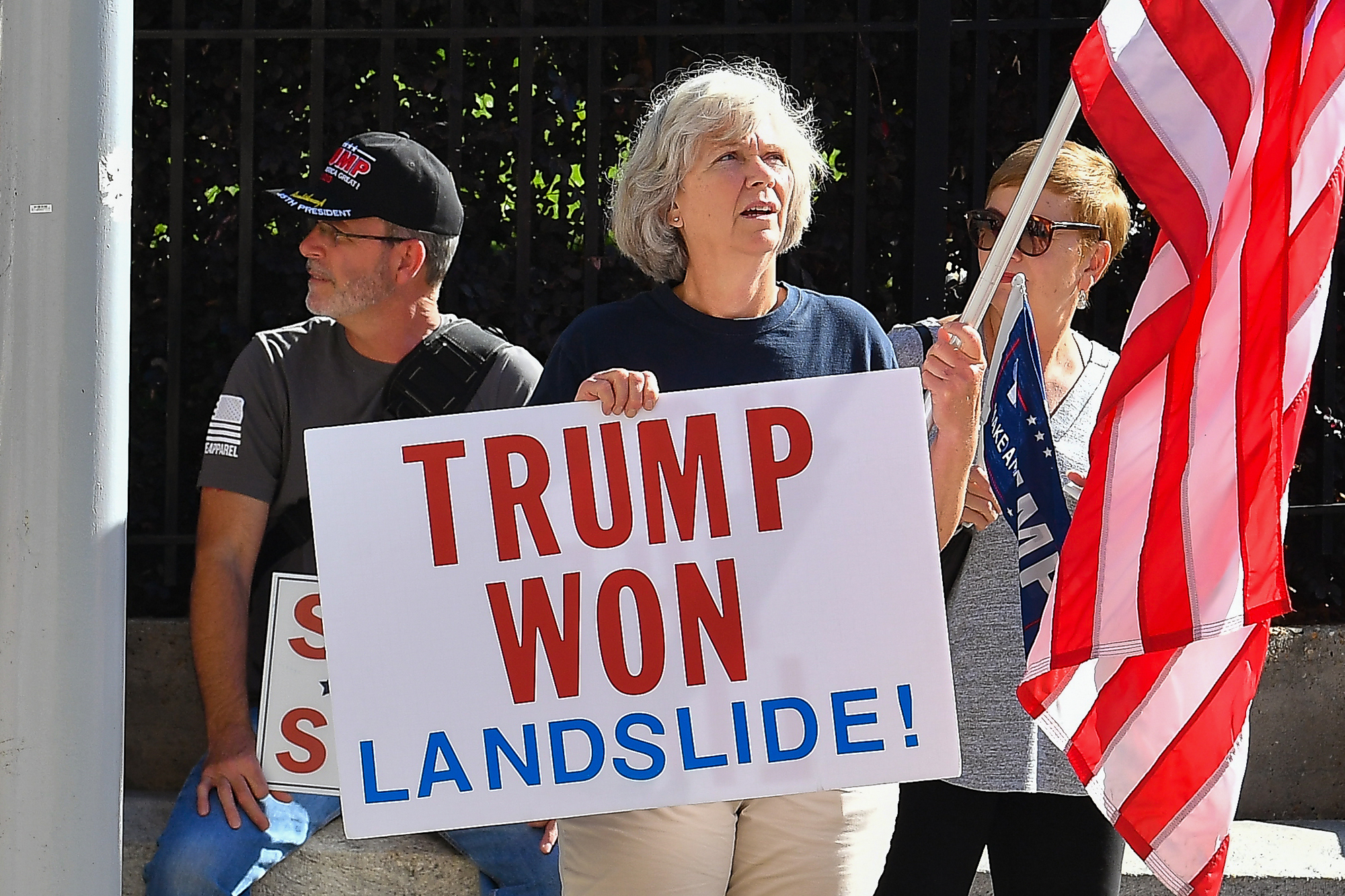 A supporter of President Trump holds a sign at a “Stop The Steal” rally in front of the Georgia State Capitol Building on November 28, 2020, in Atlanta, GA. Photo credit: © Rich Von Biberstein/Icon SMI via ZUMA Press

And again in 2020 — yes, the Stop the Steal election — where literally every statistical indicator provided the Democrats grounds to question defeats and reduced victory margins, up and down the ballot.

In these and other cases, prompted by such signals that all might not be well in electoral cyberspace, my pre-Stop the Steal election integrity colleagues and I — who approached election forensics and integrity objectively, pursuing electoral truth rather than merely a desired outcome — experienced keenly a frustration that I imagine has much in common with that which drove Peters and DePerno to pry open the black boxes to which they had access. We had tantalizing, and disturbing, indicators but the hard evidence remained hidden in hundreds of thousands of lines of proprietary code on chips in optical scanners, touchscreen voting machines, ballot marking devices, and central tabulators — all off limits.

Too Much Trust or Not Enough?

The prevailing national ethos through most of those years in which we labored on behalf of a genuine electoral integrity was one of trust. You could even say blind faith. The US was the “Beacon of Democracy” and election rigging was so far beyond the pale as to be unmentionable. It could “never happen here,” so our questions and our analyses were unwelcome. Our warnings that counting votes behind a cyber-curtain would eventually result in the catastrophic breakdown of that trust, and a weaponization of electoral “integrity” with bad intent, went unheeded.

We’re now living the full catastrophe and it’s apparent that trust will be difficult, if not impossible, to restore. Nor is the distrust merely some vague and vaporous phenomenon. It is now incarnate in scores of GOP-nominated candidates for whom the theft of Election 2020 is an article of faith and a principal campaign plank. Among these election deniers, some of those successful in November will take control of the election processes they have fiercely attacked in the name of Stop the Steal. So the new distrust will very likely be operationalized in various counties and states throughout the country.

I neither condone the actions of the officials, like Peters and DePerno, who took matters into their own hands, nor suggest that they had reasonable grounds for believing such actions were necessary. As noted above, the forensic indicators for the election all pointed in the opposite direction and, in the case of the presidential contest, both preelection and exit polling indicated a Biden popular vote victory margin nearly double the 7 million-vote official margin. The driving force behind pretty much all of the Stop the Steal campaign, including both its lawful and unlawful activities, was and is the conviction that Donald Trump couldn’t have lost because he couldn’t have lost. Fierce partisanship coupled with big lies and potent demagoguery can do that to you.

And it is possible that even a much more transparent process — one in which the votes were hand counted under public observation, or uniformly audited and verified to a high standard of confidence, or even one in which digital ballot images were created of every ballot and made available to public inspection, a kind of crowd-sourced mega-audit — would not have satisfied the crestfallen MAGAs and stopped the Stop the Steal circus in its tracks, before it got to January 6. It is hard to prove anything beyond an unreasonable doubt.

But, going forward, it should be clear that the concealed processes we continue to rely on for counting votes are an open invitation to more Stop the Steals and the likely repetition and escalation of the tactics that have already shaken the nation. There will be more Matthew DePernos and Tina Peterses, more Coffee Counties, more Cyberninjas, and more civil unrest…

Until our election system can provide an unmistakably sound answer to that natural, and now unavoidable, question: How do we know?

The answer was: We don’t. It still is.

Jonathan D. Simon, a senior editor at WhoWhatWhy, was executive director of Election Defense Alliance from 2006 to 2016 and is the author of CODE RED: Computerized Elections and the War on American Democracy.