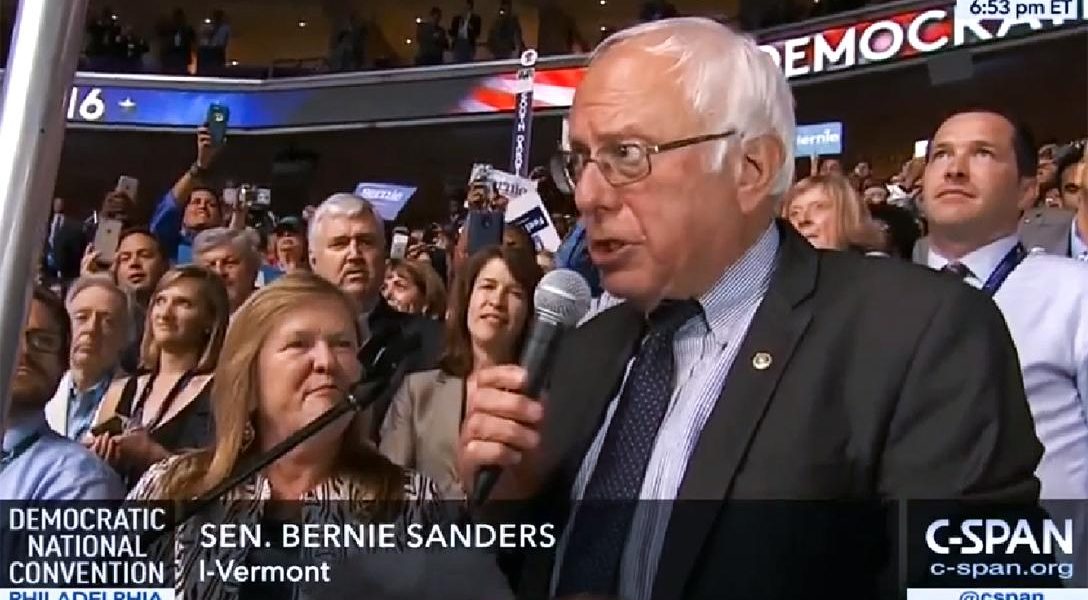 Bernie Sanders: “I move that Hillary Clinton be selected as the nominee of the Democratic Party for President of the United States.”  Photo credit: CSPAN Screenshot
Elections

Sanders Is Done Running, But He Has Inspired Something Bigger

Senator Bernie Sanders’s fierce, resolutely determined quest to become president finally came to an end on Tuesday. At the conclusion of the roll call at the Democratic National Convention, a noticeably tearful Sanders stood and made a motion that his opponent, Hillary Clinton, be confirmed as the Democratic Party’s presidential nominee.

Sanders told the convention on Monday that he had started a revolution. To some of his supporters inside and outside the Wells Fargo Center, that revolution does not necessarily include exercising the right to vote. They have more faith in the power of political protest.

“I’ve never voted ever,” said Jonathan Hernandez, 22, a software developer from Virginia who on Monday marched down Broad Street in Philadelphia towards the Wells Fargo Center, the site of the Convention. He believes that the electoral college makes his vote meaningless.

“That’s why I’m here,” Hernandez told WhoWhatWhy. “Protesting enlightens people by making them aware of what’s actually going on out there.”

“If Martin Luther King can change laws in general, then we can change things through peaceful protest. There are ways of doing it.” WhoWhatWhy spoke to activists from as far away as Oakland, CA, and Austin, TX, who took planes, or buses, or long car rides in order to be heard.

They viewed these protests as the most important part of democracy — even more than the ballot box.

“From my perspective, it really feels like my vote doesn’t matter,” James Perault, a 28-year-old lumber mill employee from Austin, TX, told WhoWhatWhy.

Perault sees his residency in Texas — a traditional Republican stronghold that would likely only elect Clinton as part of a landslide — as a reason not to care about the impact of his ballot.

“And that’s a reason why I’m here. Because just getting out to vote isn’t involved enough.”

Making Insiders Out of Outsiders

The protests could not just be found in the streets. They were inside the convention hall as well, where many Sanders delegates treated the event as their own rally.

They booed speakers supporting Clinton, they chanted “No TPP!”, and many walked out when it was announced that Clinton was nominated.

While nominating conventions usually are defined by party unity and delegates that fall quickly in line behind a prepared message to heal the divisions of a campaign, the 2016 DNC has become something else for thousands of Sanders supporters: yet another staging ground for the activism that has defined the campaign of the Vermont senator.

Usually, delegates to the party conventions are party insiders — people who have held elected office in their states, or worked for state and national parties, or advocated for issues alongside the party. But Sanders’s delegates are different.

Sanders’s delegates are activists. They come not from the longtime political class — which supported Clinton’s bid overwhelmingly — but from organizers and protesters that usually work outside the system. Sanders has brought these people into the system by making them delegates, but, as is clear from their actions, many continue to consider themselves outsiders.

“Voting is definitely not the only way to try to stop a politician,” said Jacob Moss, 24-year-old recent college graduate from Maine. Moss wore a homemade costume of a dollar bill with the words, “Not 2 Be Used 2 Buy Elections” across it. He traveled to Philadelphia with his family, who were selling posters that pit Bernie “Birdie” Sanders against Hillary “War Hawk” Clinton, “Printed at a union print shop in Vermont.”

“I’m here right now. I’m here to protest,” Moss told WhoWhatWhy. “I’m here to have my voice heard. I don’t know what better way I could.”

Moss pointed out that protests had changed American policy in recent years, in ways that made him hopeful for their effect on the political process.

Moss referred to the decision by President Barack Obama to not approve the Keystone Pipeline, a decision, he said, that resulted from the activism of environmentalists like Climate Change activist Bill McKibben. He credits a rally that McKibben led in front of the White House as influencing the president’s decision to reject the pipeline

“And if that many people can show up on the steps of the White House, and make that argument, and he listens,” Moss said, “then I have a mild amount of faith in democracy.”

Sanders is not the only one to organize a new generation of activism. Black Lives Matter has become a major force on the political stage by emphasizing not the work of electoral politics and deal-making, but on-the-ground activism.

Will the Revolution Continue?

Before the Republican National Convention in Cleveland, WhoWhatWhy joined in with much of the media in anticipating a week of hell and tensions in the city. But that never materialized. The mood outside the arena, as the political party that once nominated Abraham Lincoln nominated Donald Trump, was fun, peaceful, and even happy. Just 24 people were arrested in the whole week of demonstrations, most in a single action by a group of revolutionary communists who burned an American flag. For these protesters, standing in the streets and being heard is more important than voting. In an election that several described as the choice between “the lesser of two evils,” the need for something greater felt necessary.

It is clear from his Monday night speech that Sanders wants his revolution to continue, as he fights to push the Democratic party to endorse his progressive agenda. What is not clear is whether his supporters will follow, and what direction their activism will take.