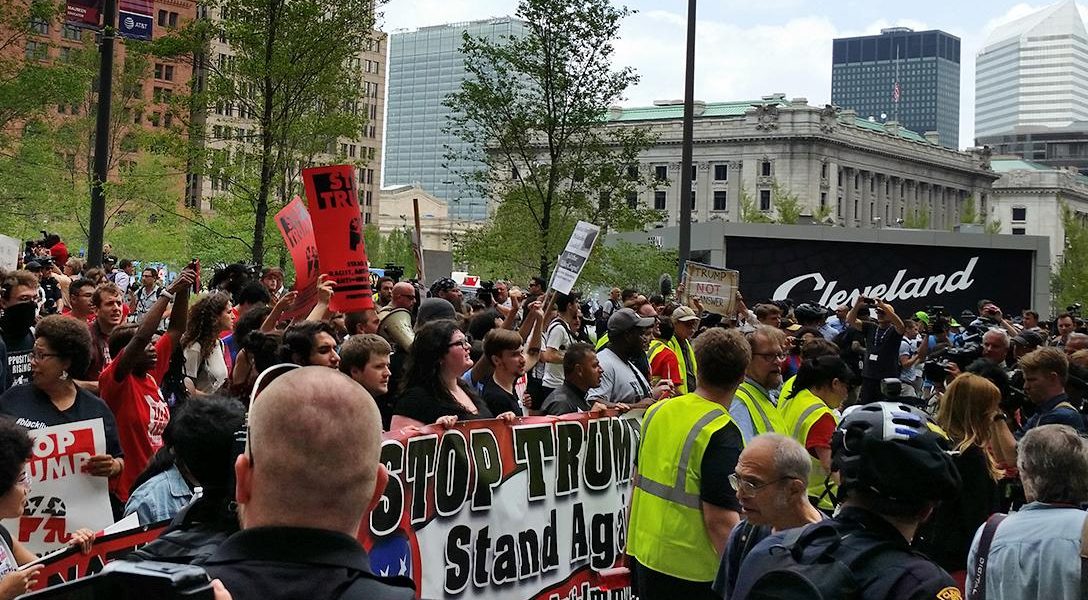 What People Won’t Do To Stop Trump — Vote for Clinton

Hundreds of protesters at the Stop Trump rally came to Cleveland Monday to express their opposition to the Republican nominee. Many of them traveled hundreds of miles to make their voices heard — but there is one thing many will not do to stop Trump: Vote for Hillary Clinton.

In fact, it seems as though the only thing Trump’s supporters and detractors participating in rallies outside of the Republican National Convention can agree on is their intense animosity toward Hillary.

It was reflected in the shout of a man selling Trump-themed buttons and other memorabilia — “If you vote for Hillary you’re not an American.”

It could be seen in the T-shirt that was worn proudly by more attendees than could be counted — “Hillary For Prison,” on an American flag logo designed to look like a campaign poster.

It was expressed by many of the Trump supporters WhoWhatWhy encountered. Their main reason for supporting Trump — above any other shared goal or policy — was mistrust and loathing of his opponent.

And it was of course telegraphed to millions by convention speakers who focused heavily on accusations about Clinton’s record as Secretary of State, and implicated her in the 2012 deaths of diplomats at the American embassy in Benghazi.

It was unsurprising to find this kind of hatred for Clinton at a convention organized by her political opponents. But the antipathy towards the former first lady extended far beyond that. Even those who had travelled from out-of-state just to protest Donald Trump’s nomination were against her. Woman handcuffed while crowd cries out, “Let her go!” and “What’d she do?”
Photo credit: Jon Hecht / WhoWhatWhy

Neither Trump Nor Clinton

“I would really love to see Bernie, but if he doesn’t get the nomination, probably Jill Stein,” said John Higbie, who had travelled from Pennsylvania for the protest. He did not think Stein could win, but said, “I want my voice to be heard whether or not I’m expecting someone to win. I’m not going to compromise my views simply to appease the opposition.”

Higbie said he was not concerned that Pennsylvania would likely be close in the coming election (a recent Quinnipiac poll had Trump leading by six points, while a Marist poll from around the same time had Clinton up by eight). He said he would not regret his choice, even if Trump winning Pennsylvania by a close margin allowed him to win the presidency.

“The entire platform is rigged,” he said.

Higbie was far from alone in his support of Stein. Stein’s name received cheers from the assembled crowd. And she was not the only alternative to Clinton people discussed.

A woman in her late 60s, Sarah Flounders, spent much of the rally passing out flyers for the Worker’s World Party (WWP) candidates, Monica Moorehead and Lamont Lilly, who will be on the ballot in her home state of New Jersey.

“Just like today’s demonstration, it’s really putting forth politically what’s needed, because we know there’s no solution with either of the two capitalist parties,” Flounders told WhoWhatWhy. “The resistance to Trump needs to come from the grassroots movement, from those who have disrupted the hate rallies, the racist rallies he’s held in arenas. Those who have shut down the message.”

Flounders sees racial disparities in criminal justice as the most important issue of the campaign, but remains unimpressed by the Democratic party’s response to this issue, despite the inclusion of the mothers of high-profile black victims of police violence, including Michael Brown and Eric Garner, as speakers at the Democratic convention next week in Philadelphia. Her stance was echoed by a group of Black Lives Matter activists at the event, who wore signs on their bodies stating “I’m not voting until black lives matter.”

Despite the general disaffection, there were a few prospective Hillary voters in the crowd.

Patricia Aguino and Sam Castro marched through the streets of Cleveland near the Quicken Loans Arena as part of a protest by the Revolution Club. Under a large banner showing the faces of minorities killed by police alongside signs proclaiming that “America was never great,” the two held a homemade sign declaring they were Latinos against Trump.

Both expressed their frustrations with Clinton — they had each supported Sanders in the primaries. But they both also said that when the likely alternative was Trump, voting for Clinton seemed like an easy sacrifice to make.

“I can see the reason why someone would want to vote for their principles,” Aguino, a 27-year-old grad student and resident of Cleveland, told WhoWhatWhy. But for her it was worth it to vote for the lesser of two evils, especially when the alternative, Trump’s anti-immigrant rhetoric and plans for deportations and border walls, could mean so much for the fate of Latinos affected by immigration.

“A lot of people, especially minorities, are going to be affected by a Trump presidency.”

“That’s what we should be doing,” said Castro. “It’s the same thing Bernie did — try to bring down the Republican Party, which has always been against the Hispanic community.”

“What we’re trying to do is get the right candidate that’s going to work for us.” Trump’s unexpected primary wins against better-funded opponents supported by the Republican Party insiders arguably demonstrated the power of the ballot box in the era of social media. But that example has failed to sway the majority of anti-Trump protesters.

“Historically speaking it’s been the power of the people that’s led to the most progressive change,” said Jessica Schwartz, an activist who helped organize the Coalition to Stop Trump rally. She focused on the need to fight back against Trump’s rhetoric, but did not see voting as an integral part of that goal.

“Voting is a very small part of what needs to be done in order to achieve justice.”

Camilla Blackwell, 47, a Cleveland resident who was in the city center selling T-shirts but not for the convention or rallies, was against Trump due to his anti-immigrant views, but still said she had no desire to vote.

“I don’t see any change at all,” she told WhoWhatWhy.

Neither did Abbie Doyle, a 21-year-old grad student at Ohio University, who came to the city to document the convention hubbub as part of a school project. She said she had not voted in her state’s primary, and she refuses to vote either for Trump, who she felt was extremely bigoted, or for Clinton.

Frustrated with the choice of candidates, she complained that her vote was “basically useless.”

How the two nominees will deal with the extraordinary degree of public disengagement and broad demoralization, is the question now.