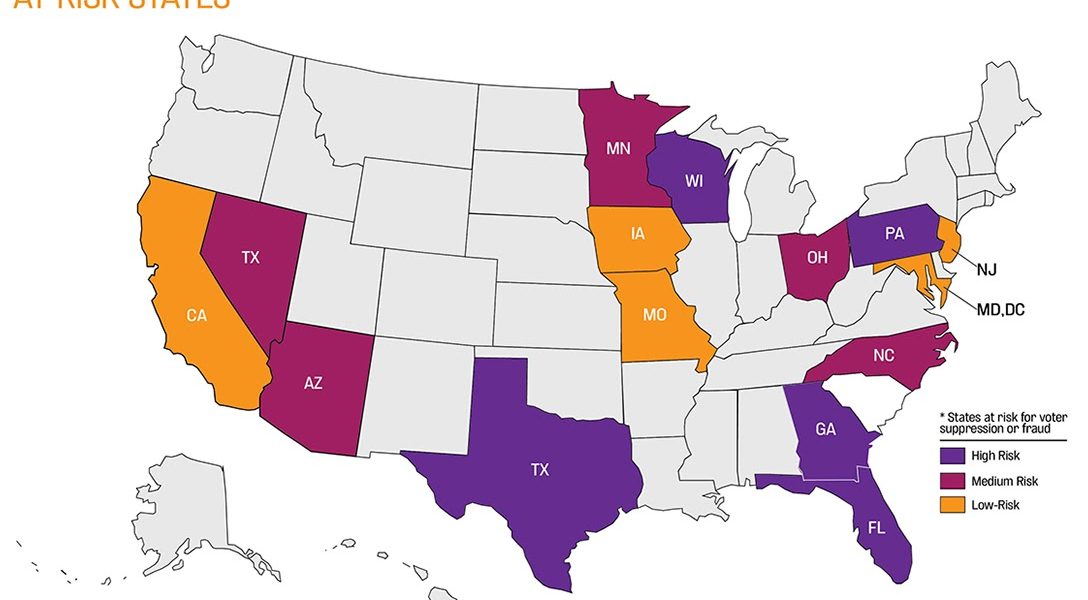 On a Cliff’s Edge: Final Polls Are Close in Many Key States

Once all the ballots are counted after Election Day (which might take a while), Donald Trump or Joe Biden will have gained the most votes cast nationwide.

But it doesn’t matter.

As most people know, the Electoral College will determine who occupies the Oval Office in January. With a few exceptions, the presidential candidate who receives the most votes in each state will win all its electoral votes — winner take all.

It’s quite possible — and in fact, it happened in 2016 — that the winner of the nationwide popular vote will end up losing the election.

For months, WhoWhatWhy has been focusing on states with concerns about election integrity, including voter suppression and likely problems involving how ballots are scanned or counted. Many are battleground states, with the winners — also including senators and US representatives — likely to be determined by narrow margins.

Following is our list of states most “at risk,” with results of final statewide opinion surveys. Spoiler alert: In most of them, the presidential race is still neck and neck.

Florida
Beyond sun-kissed beaches, alligators, and mosquitoes, Florida is the state that added “hanging chad” to the political lexicon, as well as the “Brooks Brothers riot.” The outcome of the 2000 election was eventually determined by the US Supreme Court, which ended the Florida recount for Bush v. Gore.

The polling site FiveThirtyEight aggregates results of other polls, which they grade — and weight — based on sample size and reliability. On the eve of the election, the site was predicting 49 percent of the vote for Biden, and 46.6 percent for Trump. However, that’s well within the margin of error, usually three to five percentage points, meaning that on the eve of the election, Florida was too close to call.

Other last-minute polls in Florida, which have similar margins of error, show the same thing:

One thing to keep in mind for opinion surveys, in Florida or anywhere else, is that pollsters make assumptions (also known as best guesses) for turnout by various categories of voters: Republican, Democrat, young, old, male, female, White, Black, or Hispanic, and so on.
The actual turnout — or not — by any of those subgroups could change the vote totals substantially.

Pennsylvania
In 2016, Hillary Clinton lost to Trump by only 44,000 votes in Pennsylvania, a state she did not visit toward the end of her campaign. This time around, neither candidate made the same mistake. Trump has crisscrossed the state in the last couple of days. Biden has too, making a joint appearance with former Pres. Barack Obama in Philadelphia. Democratic volunteers from New York and New Jersey have shown up to call voters and knock on doors in a mad dash to the finish line.

Overall voter turnout in Pennsylvania could be crucial. Philadelphia, for example, opened 17 satellite offices for citizens to register, vote in person, or hand in their absentee ballots. But by the end of last week, more than 350,000 absentee ballots requested by Democratic voters had yet to be returned.

Texas
Many analysts predict that Texas, a Republican stronghold for many years, has a chance to turn blue — or at least purple — in 2020. It may have happened already; more Texans have returned their ballots in this election than the total number of voters who participated in 2016.

Voter suppression courtroom battles could loom large. Republican Gov. Greg Abbott signed an order banning mobile voting places and allowed only one drop-off site in each county for returning mail-in ballots. But the influx of newcomers moving to Texas, and concerns about a new surge in COVID-19 cases, could make a difference, though Trump appears to have a slight edge.

Considering Texas’s 38 votes in the Electoral College (second only to California), if the state flips to Biden, that would be a really big deal.

Wisconsin
The land of happy cows and famous cheese has been hit hard by the pandemic, and roiled by the shooting deaths of two demonstrators, allegedly by a 17-year-old member of a white militia. On Saturday, 3,752 new COVID-19 cases were reported and 1,500 hospitalizations — a big number for a small state.

Trump won Wisconsin by 23,000 votes in 2016, but this year, color it purple with a Democratic governor pitted against a Republican Legislature. Meanwhile activists are pushing back against voter suppression tactics.

Wisconsin could be an early crack in Trump’s red wall of usually blue states that he flipped in 2016. The polls here show Biden comfortably ahead, well beyond the margin of error.

Concludes the Siena College Research Institute: “Wisconsin appears out of reach for Trump and likely to return to the Democratic side of the ledger.”

Michigan
This blue-collar bastion had been a longtime Democratic stronghold, but huge job losses in the auto industry and other manufacturing sectors persuaded many voters in 2016 to support Trump, who won the state.

The political environment is still turbulent. In the last two weeks before the election, 13 members of a right-wing militia were charged with planning to kidnap Democratic Gov. Gretchen Whitmer.

Clinton lost Michigan in 2016 by a tiny margin: 11,000 votes. The outlook for Biden on Tuesday is much rosier.

The president knows the importance of Michigan. He held three rallies there in the final days before the election, leading jeers against Whitmer.

Georgia
In 2018, Democrat Stacey Abrams lost the gubernatorial election to Republican Brian Kemp by 54,000 votes in a contest where more than 50,000 voters were thrown off the rolls and 214 polling places were closed. Almost immediately after losing, she started Fair Fight, an organization pushing back against voter suppression. Georgia voters also have two US Senate races, so this election is particularly important.

Fair Fight said it has registered more than 500,000 new voters this year, and there was record turnout in the Georgia primary in June. For the November 3 finale, there was a 63 percent increase in early voting compared to 2016. Voter suppression issues have been very much on the table in these states, with results of last-minute opinion surveys very close in several of them.

Arizona
This state in the desert also has a blazing-hot Senate race. Republican incumbent Martha McSally is facing a challenge from Democrat Mark Kelly, a former astronaut and husband of former congresswoman and anti-gun advocate Gabby Giffords. Because McSally was appointed by the governor to fill retiring Senator Jon Kyl’s seat, if Kelly wins, he will take office on November 30, not in January.

Nevada
A strong union state that went for Bernie Sanders in the primary, it has been hit hard by COVID-19, especially its tourist economy. More than 100,000 cases of COVID-19 have been reported, and in the last two weeks the daily tally of new cases has jumped by 30 percent. Trump has high hopes to win in Nevada, but the polls have Biden with a slim lead. Already, about 1.18 million people have cast their ballots here, more than the the 1.12 million people who voted in 2016.

Ohio
In 2016, Trump swamped Clinton here by a 51.3 percent to 43.2 percent margin, another brick in his red wall of formerly Democratic states that changed sides. The former Republican governor, John Kasich, did the same, turning his back on the president and supporting Biden at the Democratic national convention. Democrats hope voters will do the same, and flip the presidential results back to blue, even though Biden has spent far less time here than in Pennsylvania and Michigan. Ohio voters have had to deal with many obstacles to voting, with voter suppression a high-profile issue.

North Carolina
The Tar Heel state has been host to a variety of election-related challenges, with more than 500,000 residents ruled ineligible to vote, accusations of gerrymandered districts, and a variety of dirty tricks revealed.

North Carolina also has a highly competitive Senate race between incumbent Thom Tillis (R) and Cal Cunningham (D). The challenger was caught up in a high profile sexting scandal, but polls still show him with a small lead over Tillis. The presidential race is just as close.

Minnesota
Trump lost Minnesota in 2016 by only 45,000 votes, and this year has held rallies all over the state, raging against Rep. Ilhan Omar (D-MN), a member of “the Squad” of House liberals.

A federal appeals court is already knee-deep in voting and counting disputes. Five days before the election, the appeals court ruled that state officials must set aside any ballots that arrive after 8 p.m. on Tuesday night, tossing out the original seven-day grace period for tardy ballots if they were postmarked by Election Day. That ruling came as 500,000 requested absentee ballots had yet to be returned.

If the legal wrangling continues in Minnesota, the US Supreme Court and its newest member, Amy Coney Barrett, who reinforces the high court’s conservative majority, might be asked to return their own verdict on the outcome.

However, the polls show Biden with a solid lead in Minnesota, so any judicial involvement could be — as the lawyers say — moot.

Can We Count on Nonvoters to Vote?

Several states have mostly avoided bruising fights related to election integrity, but still offer the potential for problems to show up during or after Election Day.

California
The Golden State has long been solid blue, with little suspense expected in 2020. But recent wildfires, and passions running high on racial justice issues, could galvanize voters of either parties — or both. One election scandal was the discovery of more than 50 phony drop boxes for mail-in ballots distributed by the Republican party in Fresno and Orange counties. However, the polls show no contest in the presidential race.

New Jersey
Because of the COVID-19 pandemic, Gov. Phil Murphy (D) signed an order distributing mail-in ballots to every voter in the state. However, there were only 329 ballot boxes for drop-offs put in place for New Jersey voters, including only two boxes in Newark, its largest city. Still, the polls are forecasting an easy Biden victory.

Iowa
February’s Democratic caucuses in Iowa that kicked off the national demolition derby for presidential hopefuls featured two weeks of technological screw-ups, embarrassing both the state and the party. Some voting integrity issues are in play, and a competitive Senate race (incumbent Republican Joni Ernst vs. Democratic challenger Theresa Greenfield) could boost turnout.

As for the presidential race: virtually neck and neck.

Missouri
The Show Me state appears ready to show the country that its choice is Trump.

Maryland
Despite a popular Republican governor, no contest. For Trump, turn out the lights; the party’s over.