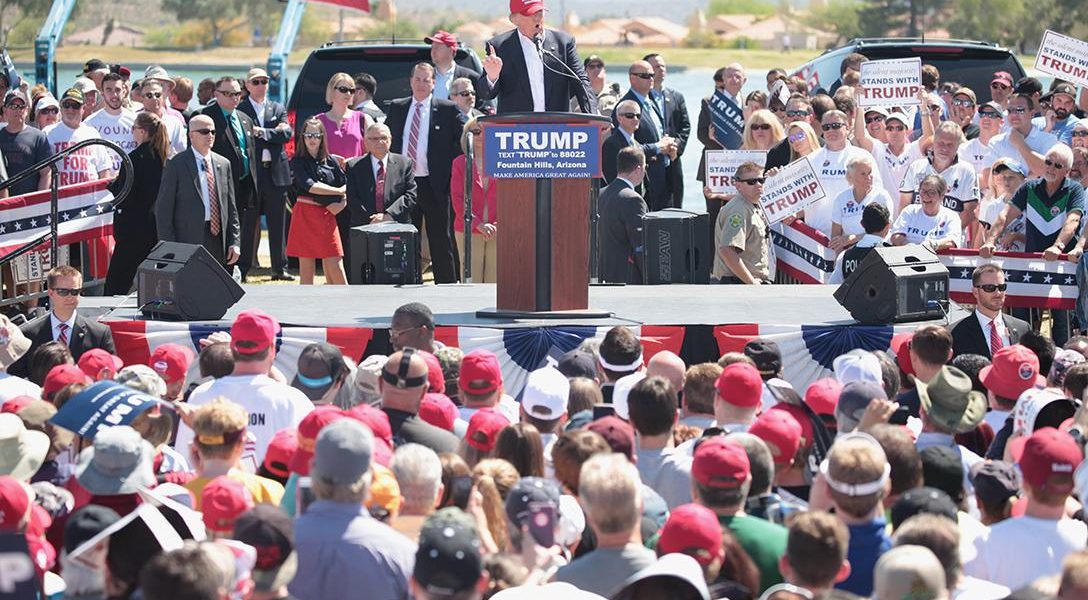 Lack of Diversity at Rallies Is a Troubling Sign for Trump

A WhoWhatWhy analysis of crowds at Donald Trump rallies across nearly a dozen states reveals that only 3.4 percent of the attendees sitting or standing in view of cameras behind the candidate were black and less than 10% belonged to any racial minority.

Granted, the number of people visible behind the candidate is not a foolproof indicator how a certain group of people will vote, but the pictures speak a clear language: Trump’s rallies are overwhelmingly white.

Of the 582 people we counted (see the end of this article for the methodology we applied) only 20 were black. At five rallies — one each held in Delaware, Michigan and Oklahoma and two held in Wisconsin — there wasn’t a single discernible African American in the crowd assembled to form the backdrop for Trump’s speech.

In light of that turnout, it might not be surprising that Trump pointed out a man as “my African American” at a recent rally in California.

However, the meager turnout of minorities at his events has not kept the presumptive GOP nominee from claiming that he is popular with these minorities, and that they support him.

“They are going to like me better than they like Obama,” Trump said of African Americans in a January interview with Fox News.

He didn’t fare much better with other minority groups either. Even giving Trump the benefit of the doubt if the specific race of an attendee could not be discerned, the total number of minorities does not crack 10 percent.

Trump’s support from white supremacists, on the other hand, is significant. A social media analysis by Fortune found 67.5 percent of the most influential pushers of the hashtag #WhiteGenocide on Twitter follow Trump, compared to 5.7 percent and 2 percent for Hillary Clinton and Bernie Sanders, respectively.

“Partisanship aside, the presidency is a unique office, and historically presidents make real effort in some way to demonstrate they intend to be President for all Americans,” said David Wade, former chief of staff to Secretary of State John Kerry and a senior aide in Kerry’s presidential campaign. “Trump seems to relish being an outlier who does the opposite, which presumably will affect who attends his events and might even affect whom the campaign puts on stage.”

Wade raised an interesting point. Usually, campaigns try to “stack” the crowds in view of cameras to showcase diversity. Trump’s campaign does not. There are multiple possible explanations.

One theory with solid evidence is that Trump’s campaign is a “dysfunctional” mess and severely understaffed, according to a recent report. Trump’s campaign has 70 paid staffers, while Clinton’s has ten times as many. (Trump fired his campaign manager, Corey Lewandowski, on June 20.)

“Republicans working to elect Trump describe a bare-bones effort debilitated by infighting, a lack of staff to carry out basic functions, minimal coordination with allies and a message that’s prisoner to Trump’s momentary whims,” the piece said.

Geoffrey Skelley, the associate editor of Sabato’s Crystal Ball at the University of Virginia Center for Politics, said the general lack of racial and ethnic diversity at Trump rallies is simple — non-white voters vote overwhelmingly democratic.

Andy Barr, a Democratic consultant who has worked on multiple campaigns, said organizers at rallies typically put together a group of supporters to stand behind the candidate to reaffirm the message of the day. If a candidate is announcing an education plan, for instance, the campaign would look for parents and teachers to fill out the shot. Barr agreed the results of the analysis are a coalescence of two factors reflecting Trump’s presidential run — a flawed campaign and voter demographics.

“My guess is that, like most things, there isn’t a whole lot of strategic thought going into this from the Trump campaign,” Barr said. “The other piece of this is that if you look at the demographics on who is supporting Trump, the numbers are pretty reflective of the support the Trump campaign has nationwide.”

The Trump campaign did not respond to a request for comment.

So it is possible that nobody on Trump’s team has routinely thought about “stacking” the backdrop with a diverse crowd. However, the account of one African American attending a Trump rally seems to suggest that, at least at times, these considerations play a role. At a campaign stop in Springfield, Illinois, Johari Osayi Idusuyi, a 23-year-old college student, was asked to sit behind Trump and made headlines after reading a book throughout the speech. In an interview, Idusuyi said her placement in the crowd by Trump’s campaign was clearly strategic.

“I think we were chosen for obvious reasons,” Idusuyi said. “We are minorities and there weren’t a lot of minorities there. He also instructed us to sit in the middle, so we kind of already knew what this was.”

Another possibility is that Trump’s campaign is making a conscious decision to have a white backdrop at rallies.

Despite the numbers, Trump insists he will win many minority votes in November even as his rhetoric continues to alienate electorally-significant minority groups. In Trump’s first campaign speech he called Mexican immigrants “rapists” and “criminals” with the caveat that “some are good people.” He also said a Black Lives Matter protester who was assaulted at his rally “should have been roughed up.”

“Increasingly in American politics, demographics is destiny, and Trump is turning off African-American and Hispanic voters in ways we haven’t seen in decades, at a time when African-American turnout has been highly mobilized the last two presidential elections and at a time when the Hispanic vote is growing and growing,” said Wade. “Trump is courting electoral disaster.”

METHODOLOGY: We sampled random Trump rallies using video from the candidate’s Facebook page. We used February as a starting point since most of his previous rallies were held in Iowa, which has an overwhelmingly white population. For this story, we looked at the first rally in February, which was held on the 3rd. To obtain a random sample, we then picked a rally held every four days from that date. If there was no crowd behind Trump in the video, the next rally was chosen until one had a visible audience that could be counted. We used the widest shot possible that still allowed for people to be accurately counted and discerned. To give Trump the benefit of the doubt, if there was any chance that a person was non-Caucasian, they were included in the “not discernible” column and factored into the figure of 9 percent of minorities attending the rallies.