Every time I lost a match in high school, my tennis coach would give me some simple advice: “Change a losing strategy.” It’s what keeps coming back to me as I think about current efforts to increase confidence in our elections.

Election officials, and the media, desperately want to win back the confidence of voters but have not adjusted their game plan to fit the current situation. They do not seem to understand what people need in order to believe that elections are trustworthy.

Our democracy hinges on the peaceful transfer of power and, in order for that to happen, candidates and voters alike must believe that the ballots of all eligible voters — and only eligible voters — were counted and counted as the voter intended. With public attitudes now being shaped by increasingly inflammatory, divisive, and highly deceptive rhetoric, and with electoral stakes perceived as existential, it is an open question whether this challenge can be met.

I have served as an Election Day polling place official, as well as both a partisan and nonpartisan election observer, and am the founder of Transparent Elections NC. In addition, I have been a consultant for election integrity groups on both ends of the political spectrum, so I have a unique insight into the crisis and what practical solutions would look like.

The tack most media and election officials have taken to solve this crisis of confidence is not working as trust in elections is rapidly eroding, and not just with Republicans. While 90 percent of Democrats said in early 2021 that they were “at least somewhat confident that elections reflected the will of the people,” by mid-2022, only 57 percent held that view.

“Most Secure Election Ever”

The level of distrust — including that of election officials not wanting to hire people from partisan groups or even nonpartisan “inquisitive” applicants for fear that they will commit fraud — is, as I have encountered in the course of my work, high on both sides.

Nearly every bastion of the election industry, from the head of the federal Elections Assistance Commission all the way down to local election clerks, is asking for trust in the people who run elections rather than the process. All alike have spouted the mantra that 2020 was the most secure election ever, with thoroughly adequate auditing and no widespread fraud.

But the problem is that sufficient information has not been provided to substantiate those claims so that, to the skeptical, they sound like just another layer of “Nothing to see here, folks.” 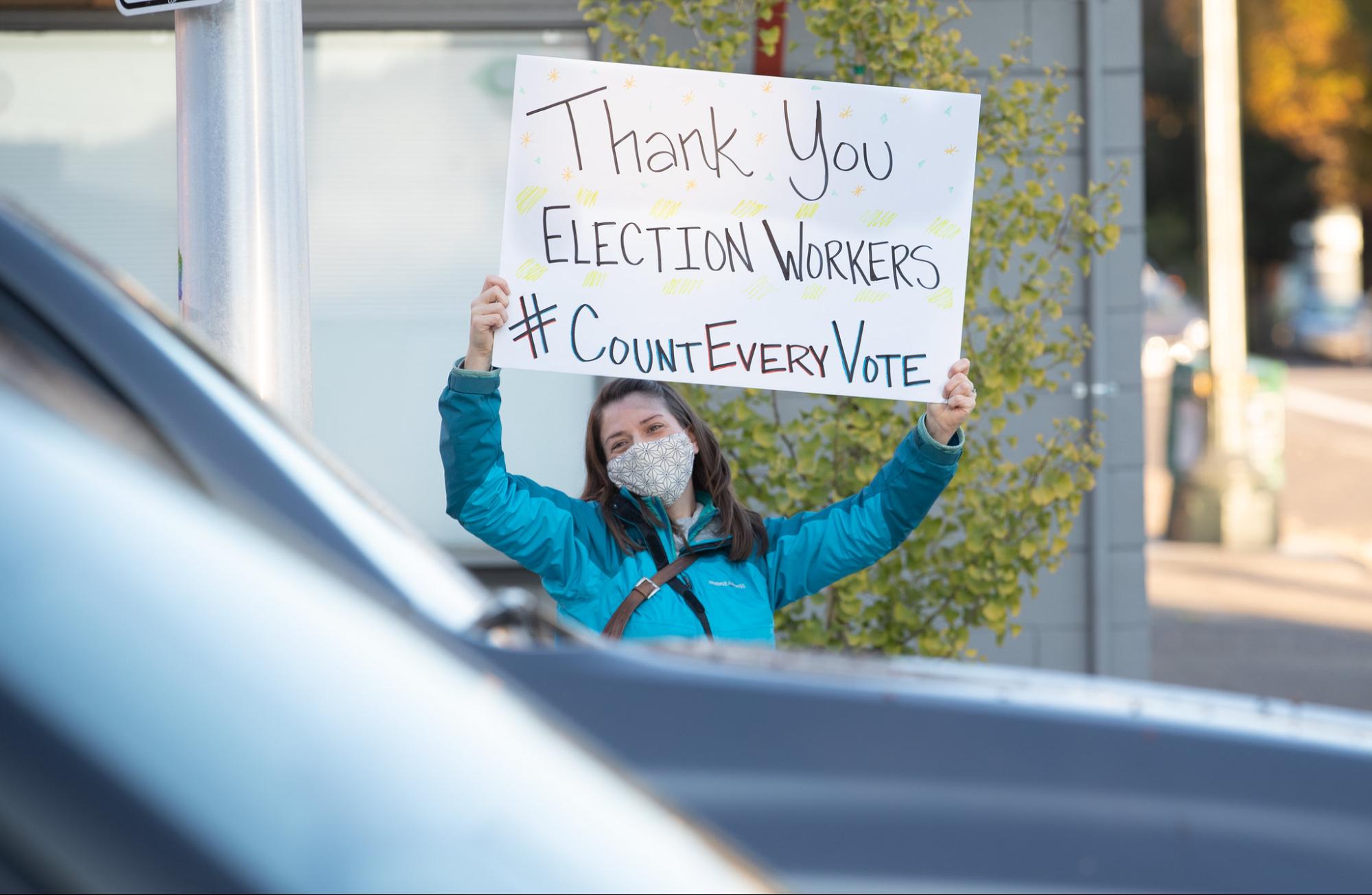 Instead of leaning into transparency, elections offices have been pouring resources into “Myth Buster Mondays” and other such outreach programs that repeat those claims — without substantiating them — in order to rebuild public trust.

These initiatives are not just ineffective but may actually be decreasing confidence with broad statements that would hit the “true, but misleading” mark on the truth meter.

For example, when election officials say, “Trust us, we conducted an audit,” they are implying that a full, impartial, independent audit was undertaken. But anyone who asks a few questions will discover that what they are referring to is a partial, internal audit conducted by the same people whose processes are being evaluated. This, in itself, should raise a red flag, especially when such audits come back “perfect” at a high rate.

Nearly every industry that serves the public has to undergo robust, independent, external audits with strict criteria in order to catch inevitable errors and detect and deter insider fraud. Such audits are a staple of conducting business when numbers are involved, and no business is more beholden to numbers than the business of elections. Self-audits don’t fly in the business world, and, of course, they should not fly in our elections.

“Everything Aligns” in NC

Let’s take North Carolina as an example. On election night, county boards are supposed to be present when precinct vote totals are uploaded into the county computer, and this process must be public. However, in Wake County, the largest in the state, a quorum of board members is not present to supervise and the public is prevented from entering the building on election night. These critical election processes all take place without board or public oversight.

Then, following the election, local Boards of Election (BOEs) are responsible for the county audit and canvass, which is the public process of examining and verifying what generally turns out to be an inadequate amount of election documentation in order to determine whether the vote totals are correct.

The audit sample is of two precincts, and does not include any contests below the first one or two at the top of the ballot. The public is not allowed to get close enough to hear anything and only close enough to see the auditors writing and erasing before announcing that the totals all match.

Despite the state board’s directive that county boards should not just rubber-stamp the documents the staff prepares, the counties usually defer the verification tasks anyway. Within the 10-day period following the election, board staff do most of the work behind the scenes. The final product is a group of signed abstracts certifying the election, which is sent to the state to review.

Any audit, and the reports that follow, should provide convincing evidence that the results are trustworthy by enumerating all issues found and conveying a plan to make corrections to the process prior to the next election cycle.

I have attended many canvasses in Wake County where these processes appear entirely ceremonial — so it is easy enough to understand how anyone observing the board just going through the motions might come away with little trust in the process.

Additionally, the state board is required to canvass all the counties to ensure that they have done their due diligence — but then defers its own duties to state board staff in contravention of the specified procedure and fully relies on them to recommend whether or not the election should be certified.

Verifying the signed abstracts from counties — as well as evaluating the state’s audit report, prepared by state board staff — are the major components of the state’s canvass and guide the board in their decision to certify an election.

A public records request revealed that eight counties submitted only some of the required abstracts to the NCSBE for the 2020 general election, and, of those submitted, only two of the counties’ abstracts were signed; seven submitted no abstracts at all.

In addition, the 2020 North Carolina Audit Report contains, in a mere three pages, no useful information, except a description of only four of the six audit types that the NCSBE claims it conducts, with a sentence or two stating that nothing found would alter the outcome of the election.

Despite this, state board staff advised the board to certify the election, saying that the staff had reviewed all the documentation and “everything aligns.”

Any audit, and the reports that follow, should provide convincing evidence that the results are trustworthy by enumerating all issues found and conveying a plan to make corrections to the process prior to the next election cycle.

Rubber-stamping is unacceptable in the engineering industry, as it has led to catastrophic consequences. The dynamic now playing out in our elections is reminiscent of the Columbia space shuttle disaster.

Fatal decisions made by NASA employees were, in part, driven by scheduling and budget pressures, which ultimately affected their ability to internally analyze and evaluate risk. Dissenting opinions pointing out potential issues were not only discouraged but in fact were blocked, especially if a deviation in a launch schedule would have been the result.

Election Oversight after “Stop the Steal”

The media have also become part of this rubber-stamping chain by repeating statements from election officials without having done their due diligence.

And the media now increasingly shy away from reporting anything about elections that needs improvement or about election integrity groups’ efforts to improve elections — fearing that such reporting has the potential to affirm election deniers and add fuel to an already out-of-control fire.

Instead, they simply lump in anyone who asks for some type of public oversight — including my own organization, Transparent Elections NC — with the “Stop the Steal” movement.

Indeed there are people and groups causing chaos for chaos’s sake, with the intent to overturn previous elections or disrupt current ones. Their assault on the system threatens the ability of more responsible stakeholders to continue having access to public records, which is foundational to public oversight of government.

Without the ability to conduct public oversight, legitimacy of the election results rests on the anodyne findings of generally toothless and often self-serving self-audits, which do not include many details, lessons learned, or recommendations.

Transparency: The Currency of Trust

The encouraging news is that a roadmap for how to handle this burgeoning level of distrust was laid out 35 years ago. We can fairly compare the level of distrust between the Soviet Union and the United States regarding nuclear disarmament with that among stakeholders in US elections.

Throughout that crisis, President Ronald Reagan repeatedly used a Russian maxim — “Trust but verify” — when endeavoring to deescalate that dire situation. And he made good on the maxim by forming an arms-control working group that implemented “extensive verification procedures that would enable both sides to monitor compliance with the [arms-control] treaty.”

Reagan’s counterpart, Soviet President Mikhail Gorbachev, referred to the agreement that included verification as “a big chance, at last, to get onto the road leading away from the threat of catastrophe.”

The solution to this current crisis is the same. Elections should be conducted in a transparent way so that, even if the least trustworthy person is conducting the election, we can have confidence in the results and understand what improvements are needed in future elections’ procedures and laws.

I view the implementation of transparency through an engineering lens: In evidence-based elections, officials must not only identify the rightful winners but also provide the public convincing evidence that they did so.

Even before the 2020 election, there were dozens of well-established nonpartisan groups working on solutions — including AUDIT USA, Florida Fair Elections Coalition, Scrutineers, SMART Elections, and the organization I founded, Transparent Elections NC. These groups continue to push forward despite increasing hostility from election offices that mischaracterize their efforts as unwarranted interference.

When election officials are asked for clarification or for public records that have been routinely requested for many years in other jurisdictions, some react emotionally, as though they are being accused of wrongdoing. In response, they have denounced people and organizations who ask for these records, calling the requests “predatory” and attributing nefarious intent by comparing them to a denial-of-service attack meant to cripple the jurisdictions’ ability to run upcoming elections.

In one case, a jurisdiction is actually suing a citizen for merely requesting a type of public record that had been released publicly for years. This antidemocratic posture has a profoundly chilling effect, discouraging people from making inquiries into the process — or saying something if they see something — which further undermines oversight.

The frightening reality is that, owing to backlash and retaliation from election offices, many of these long-standing groups are being prevented from continuing their observation and verification programs.

The solution is to allow election observation with enough transparency to make the process safe for election officials and secure for the election infrastructure. In too many jurisdictions, officials are asking for trust without verification, and we are running out of time to change this proven losing strategy.

Lynn Bernstein is a North Carolina-based advocate for election transparency and founder of Transparent Elections NC (TENC). Her background is in aerospace engineering and she is a trained international election observer.