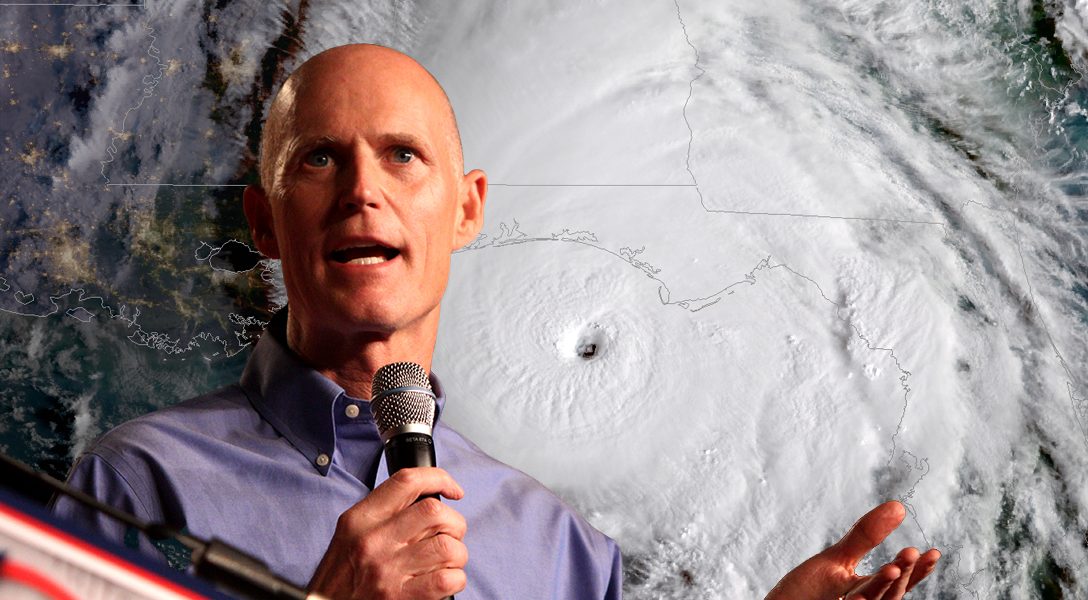 “One of two things happened,” Pam Goodman, former head of the League of Women Voters, told WhoWhatWhy. “He either learned from the past or he saw the area affected by Hurricane Michael and decided that these voters needed to be enfranchised.”

Scott’s actions are almost certain to benefit himself. As a term-limited governor, he is running for Senate this year against incumbent Democrat Sen. Bill Nelson. The two are locked in a tight battle, and easing voting rules for the areas affected by Hurricane Michael will likely net him some votes on Election Day.

The parallels between the two situations are striking — as is the contrast in Scott’s actions.

“[Hurricane Matthew] was barreling down upon us [in 2016] and the voter registration deadline was coming up the following Tuesday. [Governor Scott] shut down the entire government, as he should have,” recalled Goodman, who is now the president of Ruth’s List Florida, a group that seeks to get progressive women elected.

“But we had people ready to be sworn in as citizens that Monday, and of course after that they were going to be registered to vote,” she added.

Democrats turned to the courts back then to extend the state’s registration deadline. Scott fought these efforts, calling them unnecessary. A federal judge ended up granting a six-day extension for all Florida voters to register, calling Scott’s refusal to order an extension “irrational,” “nonsensical,” and “poppycock.” The governor’s defense was to say that it was already easy enough to vote. “Everybody has had a lot of time to register,” he said. “On top of that, we’ve got lots of opportunities to vote: early voting, absentee voting and Election Day. So I don’t intend to make any changes.” When pressed by reporters to explain the reasoning behind his refusal, Scott’s reply was only: “Look, this is, this is politics.”

Does that explain why Scott acted so differently this year?

Last month, when Hurricane Michael hit the panhandle — which is dominated by Republican voters — Democrats once again filed a similar suit seeking an extension of deadlines. This time, the judge rejected it, saying that “there is no justification” for extending the deadline.

Lawyers representing the Democrats in this most recent lawsuit condemned the decision, saying that “there is a strong likelihood that the right to vote of thousands of Floridians, including plaintiffs’ members and constituents, will be severely burdened (if not eliminated entirely) in the 2018 general election” without a deadline extension.

That’s when Scott stepped in. He signed an executive order that not only extended the deadline but also eased voting rules in several of the counties affected most by Hurricane Michael. Only one of these counties is “blue.”

Scott’s inaction in 2016 is consistent with his history of fighting efforts to make voting easier and more accessible to all people.

“I served under five governors,” retired Tallahassee supervisor of elections Ion Sancho — a Democrat-turned-independent who held office for 28 years until 2016 — recently told the Tampa Bay Times. “This is the most self-serving and partisan governor that I ever served with in the field of elections.”

Florida’s government has also done little to help the victims of Hurricane Maria vote. After the hurricane devastated Puerto Rico in 2017, large numbers of the island’s residents fled to Florida, where they are eligible to vote. But a judge had to force 32 counties to help them by providing sample ballots and election information in Spanish. Florida Secretary of State Ken Detzner had argued for dismissal of the case.

And while his predecessor Charlie Crist, who was then a Republican but is now a Democratic congressman, restored the voting rights of more than 155,000 felons in his 4-year term, Scott instituted a review process that resulted in fewer than 5,000 felons getting their voting rights back in his eight years in office. In addition, he favored Republicans over Democrats at a higher rate than any governor in more than 40 years.

“It think it’s unfair,” Crist told the Palm Beach Post. “I think it’s indefensible, and I think it’s intentional. Part of what my former party spends time on is voter suppression. And this is part of it.”

The vote restoration process resulted in yet another court order against Scott. This one mandates Florida to revise the way it allows felons who have served their sentences to regain their right to vote. However, this may become moot: If Amendment 4 passes next week, the voting rights of all ex-felons will be restored, so long as they have completed their probation and were not convicted of murder or sexual offenses.