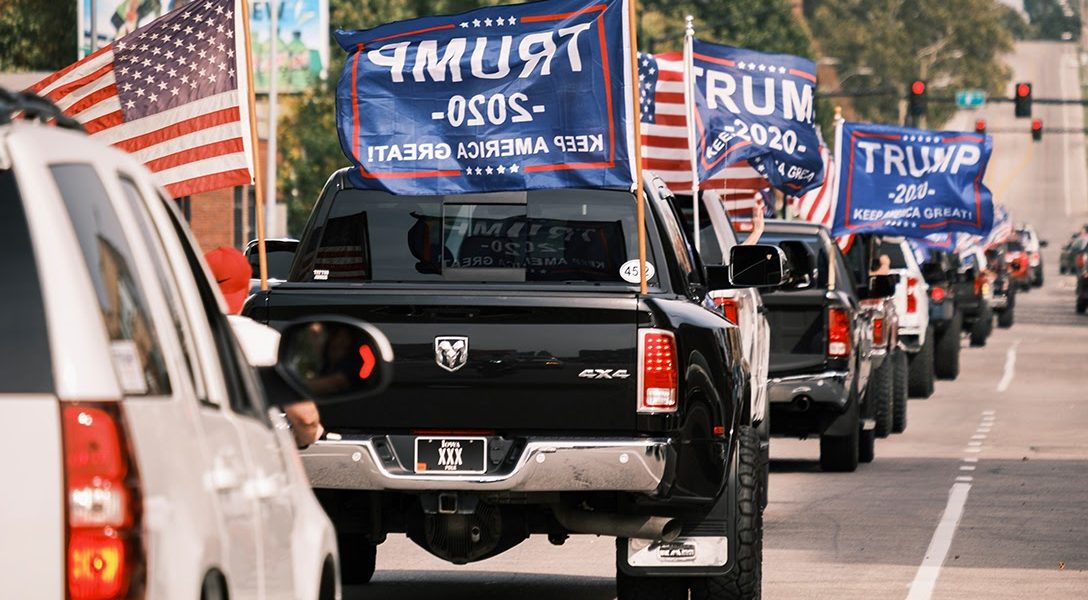 Iowans for Trump Stand by Their Man

Ann Clark was feeding her 18-month-old daughter when she heard on the local news that President Trump had been diagnosed with the coronavirus. She hoped he blamed himself, at least a little bit, for his laissez-faire approach to the pandemic.

“He ignored the fact we are in a pandemic, but to give him sole blame is laughable,” said Clark, a Trump supporter from Des Moines. Clark has already had the virus and now just wants to move on with the hope the antibodies stay in her system long enough to ride out the next wave.

Clark isn’t alone in her self-reliant approach to the pandemic. Many Iowans see pandemic precautions as little more than individual responsibilities.

“The responsibility of following protocols to avoid getting sick ultimately falls upon the individual,” said Daniel Ibarra, a 24-year-old warehouse supervisor and university student who plans to vote to reelect Trump. “It’s pretty simple, [Trump] didn’t follow [the protocols] and he got sick.”

Ibarra admits, however, there are no guarantees that following the rules will keep you completely safe. He and his fiancée, Katrina, followed CDC guidelines, but she still contracted the virus.

“We quarantined together for 14 days and I never developed any symptoms, so it seems that it comes down to an individual’s biology to some extent,” Ibarra said. Neither his fiancée’s nor the president’s diagnosis has altered Ibarra’s perspective on the pandemic. “If people are willing to risk their health by going to the bar and ignore those protocols, I believe that’s their choice,” Ibarra said. “Mask mandates are pretty unenforceable and people will do what they want … wearing a mask and standing six feet away from someone won’t do much good.”

“I’m a little upset [that President Trump got coronavirus], but it’s not that big of a deal,” Lowe said. “I’ll wear my mask like the other sheep just to avoid conversing with people, but I don’t think they are protecting me.”

Few Iowans who back the president seem to be blaming him for his role in contracting and spreading an invisible and unpredictable virus, but Trump’s taxes are undoubtedly within his control. As it turns out, however, conservative Iowans don’t fault the president for failing to pay federal income taxes, either.

Rodney Hendricks was commuting to his job at the Firestone factory on the southside of Des Moines when he heard on the radio that the New York Times was reporting that the president paid no federal income tax in the last 11 of 15 years, and that in 2016 and 2017 he only paid $750. It would stay on Hendricks’s mind for the rest of the week during his commute.

“It doesn’t bother me that he specifically didn’t pay much in taxes,” Hendricks said. “It bothers me that laws are written by lobbyists and pushed through by the politicians to have these loopholes in the first place.”

He said the news will not affect his vote this November and that he is still firmly behind the president.

Steven Rowley sat at a table in the teacher’s lounge on his lunch break scrolling through the New York Times on his phone when he first read the story. For the last 12 years, Rowley has maintained an independent stance, voting for both Democrats and Republicans based on their platforms. He voted for Trump in 2016.

“I’m disappointed, absolutely, but I’m more disappointed in the laws that allow this kind of thing to happen,” Rowley said. “All in all, Trump doesn’t do his own taxes. That’s an accounting issue. I can’t blame him for only paying $750. We need to find who opened the loophole and hold them accountable.” Rowley said he was still going to vote again for Trump.

Haley Winters sat sipping coffee and scrolling through Twitter before the start of her morning class at Iowa State University when she first read the news about the president’s taxes. She was unmoved, because she too believes Trump’s tax situation is the result of well-paid accountants doing their jobs.

“If someone is upset about [tax loopholes], vote not only for a president that would change tax codes, but a Congress that will,” Winters said. She is also still planning to support Trump on November 3.

For now, neither his taxes nor his infection with the coronavirus have done much to dissuade conservative voters in Iowa from supporting the reelection of the president, and his illness may have only bolstered their support of him across the state.