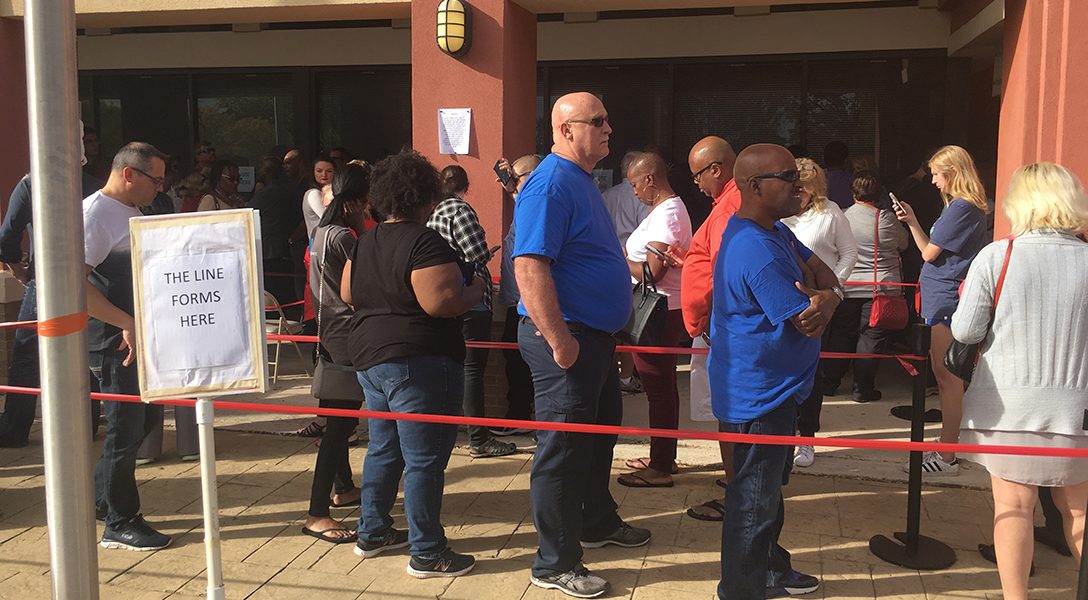 Georgia’s race for governor is the closest and most closely watched in the country. Many of the nation’s starkest partisan lines are drawn across the face of this election.

Some of the longest lines, too — as citizens, some alarmed by WhoWhatWhy’s reports on rejection of absentee ballots, decided to go to the polls during the state’s first week of early, in-person voting.

“We didn’t anticipate a three-hour wait,” said Janine Eveler, director of Cobb County Board of Elections and Registration.

But that’s exactly what hundreds of voters in Cobb County, Georgia’s third largest, have faced at various times this week. The main reason: there’s only one polling site open, with more to follow starting Saturday.

“When you have extremely high partisanship, people vote early,” Eveler said. “And this is early.”

The numbers at the site in suburban Marietta are mirroring the rest of Georgia. More than twice as many ballots have been cast so far than at this point in 2014, showing a strong surge of voter participation while also straining Georgia’s already weak voting infrastructure.

Cobb County, former stronghold of Newt Gingrich, is home to a half-million registered voters, who for years had voted Republican, but went for Hillary Clinton in 2016.

Eveler said the county is putting up resources nearly matching a presidential election, including opening polls for two Saturdays starting this weekend.

Despite the long waits on Wednesday, the voting process went smoothly. The typical voter in Cobb County finished submitting his or her electronic ballot in five minutes. Cobb has not had problems with its machines or voter files.

The problem of lines is not new to the state. Georgia had the third-longest wait times in the country in 2016, according to the MIT Elections Performance Index. Only South Carolina and Indiana — states that, like Georgia, use Direct Recording Electronic (DRE) voting machines (i.e., paperless) — were slower.

Nevertheless, Bob Cady decided to vote in person after seeing WhoWhatWhy’s exclusive reporting on high rates of absentee ballot rejections across Georgia, and especially in Gwinnett County, the state’s fastest-growing, located directly northeast of Atlanta. He was among several voters who said they felt their vote would be more secure if they put it into the machine themselves; he felt comforted by the press of a button.

“How do you know if your [absentee] vote counted?” Cady said. “Here, you know it’s in the machine. I mean, unless they hack it.”

His comment illustrates what we may be seeing more of in Georgia this midterm election: highly-engaged voters — willing to wait for hours in line, if necessary — who nonetheless cannot feel completely secure with any of the options available to them for casting a ballot.