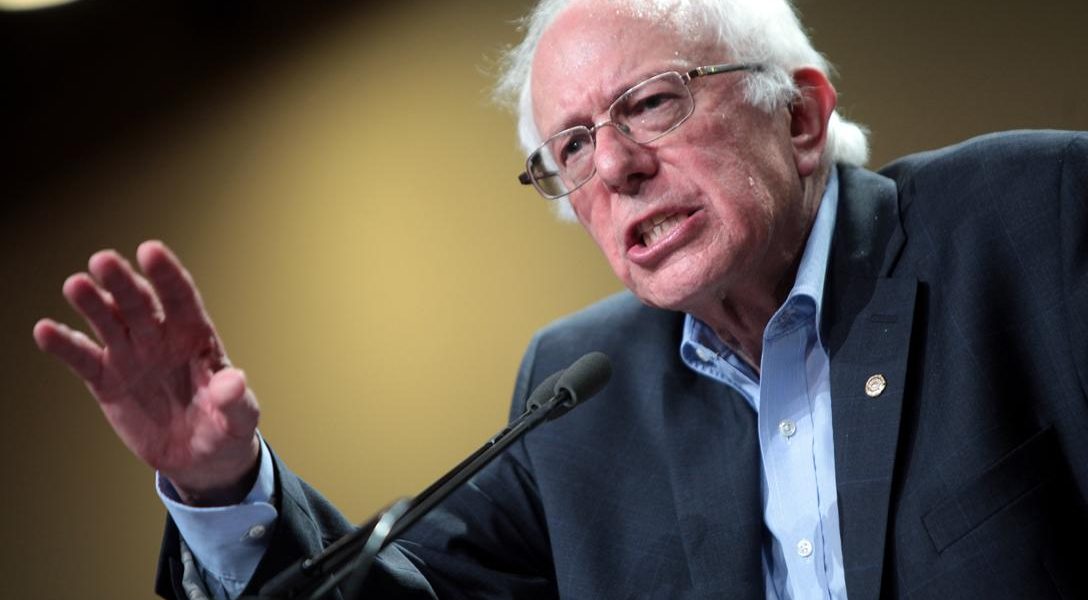 How Matt Drudge Is Fueling the Bernie Surge

In giant black letters, under an unflattering close-up of a wrinkly, aged-looking Hillary Clinton, appears the headline:

Such headlines could be expected when visiting a progressive website hoping for a strong challenge to Clinton from the left. However, this header, and many others like it, appeared on the hard-right Drudge Report. At first glance, that might seem surprising.

How did Bernie Sanders–the insurgent progressive of the Democratic presidential primary, despite polling barely past double digits–become the main headline on the June 29 Drudge Report?

The positive spin on the Sanders campaign might initially seem odd coming from Matt Drudge, an icon for right-wing America, who is about as far as possible in ideology from the self-described socialist Bernie Sanders.

The positive spin on the Sanders campaign might initially seem odd coming from Matt Drudge, an icon for right-wing America.

This isn’t the only time that Drudge has posted about Sanders. In fact, the site loves to highlight the Democratic race, which is somewhat of a snooze compared to that of the GOP. In the month that WhoWhatWhy has researched this story (June 22-July 22), the Drudge Report linked to at least 28 stories about Sanders, 22 of which portray the candidate in a positive light.*

On five occasions, stories about the Sanders campaign were given prime, top-of-page treatment, with an accompanying picture greeting users upon first access to the site.

Not Just Covering the Conversation–But Driving it

With over 2 million daily visitors, the Drudge Report remains the leading aggregator site on the web. More than half of the Associated Press’s web traffic is the result of referrals from Drudge, and other big news outlets such as Breitbart, CNN, and The New York Times receive millions of referrals annually, even more than from social media giants Facebook and Twitter. Drudge’s referrals have long been seen as a method not just of covering the national political conversation–but of driving it.

Drudge’s “support” for Sanders–the junior US Senator from Vermont– coincided with the Senator’s rise from a near-unknown to a high-profile candidate in the race for the presidency. Sanders’s polling average rose from 11.2% on June 21st to 17.2% on July 22nd–an increase of more than 50%.

The campaign’s first fundraising disclosures on July 15th revealed that Sanders had raised over $15 million since he announced his candidacy, an impressive sum for someone who mostly avoids large-donor fundraising events and is not well known outside Vermont … or at least wasn’t before Drudge showered him with positive coverage.

William Billy Kristol Gets Into The Act

Matt Drudge is not the only right wing icon to react to Sanders in this manner.  In a recent article

Barney Frank noted the curiously lavish praise neocon editor William Kristol has heaped on Sanders.  And Frank has a theory about that:

“Viewers who saw the broad smile he [Kristol] was unable to suppress had a clue to the answer: Republicans fear that if Hillary Clinton is nominated fairly easily, while they are locked in a bitter, lengthy, ideologically charged series of primaries with a large cast of characters of varying degrees of plausibility, she gets a head start for the real fight.”

The way Drudge is helping Clinton’s primary opponents indicates that wanting to create a race for the Democratic nomination is his prime motivation. In addition to linking to articles covering  Sanders’ crowds, Drudge’s main focus has been on comparisons between the Vermonter and Clinton: the website has frequently pointed to the success of the Sanders campaign as a sign of trouble for the front-runner.

On July 2, the site published a large front-and-center photograph of Clinton, along with this banner:

“Someone Digging Dirt on Bernie!”

On July 6 came the front-page headline:

“Hillary Feels the Bern in Iowa”

Drudge has a long history of opposition to Hillary Clinton.

In the past month, Drudge has linked to stories about Hillary Clinton at least 96 times, 85 of which cast the former first lady in a negative light.** She has appeared as the top headline on the site eight times.

This isn’t the first time that Drudge has treated a Democratic primary as an anyone-but-Hillary race. He gave largely positive coverage to the Obama campaign in 2008.

Earlier in the 2016 primary, Drudge latched on to Martin O’Malley as his anointed Clinton alternative, even when the Maryland governor was polling below one percent. The website seemed to go out of its way to give O’Malley coverage, with headlines like this one, on April 23:

“Paper: O’Malley Getting Bolder and Bolder”

On April 27th, Drudge received joking coverage from the political press for his decision to post a picture of O’Malley shirtless at the beach over a headline reading:

Now that Sanders has proven himself much more of a threat and has become a media darling for many other political outlets, Drudge has a new color to place his chips on. Drudge Pumps up The Trump

While most Republican candidates have not been given this front-and-center treatment with comparable frequency or positive spin in this time period, Drudge has recently been showing his support for another outspoken primary spoiler, Donald Trump.

As Trump has come to dominate headlines with his blunt, controversial comments, he has also come to dominate Drudge’s front page, with headlines showcasing Trump’s no-nonsense quotations, such as this one found under a powerful picture of Trump on July 20:

“I Don’t Need to Be Lectured”

Trump’s positive coverage is not surprising considering Drudge’s long anti-immigration stance, as well as his common frustration against Jeb Bush as a front-runner in the Republican nomination. He often compares the two establishment front-runners in his coverage, such as with the July 17 headline:

“Some Donors Give to Jeb—and Hillary!”

But where Drudge may have found an ideological ally in Trump, his support of Sanders is cynical at best.

But where Drudge may have found an ideological ally in Trump, his support of Sanders is cynical at best.

Significantly, the Drudge Report’s coverage of Sanders is notably short on policy, focusing more on Sanders’s polling, rallies, and media coverage than on his liberal views. The few instances where the Report has brought up Sanders’s progressivism, the Senator’s views were treated in a negative light.

This vagueness about the implications of an actual Sanders administration highlights how, for all the positive coverage of Bernie, he’s still a sideshow of the main event Drudge is watching.

*WhoWhatWhy accessed the Wayback Machine Internet Archive for research on this story. The archive is not complete—most dates have several snapshots of the website from different points during the day, but some dates are more thorough than others. There are likely stories that were posted on Drudge Report but not accessible in the archive.

**Some stories mentioning both candidates were counted in both tallies.