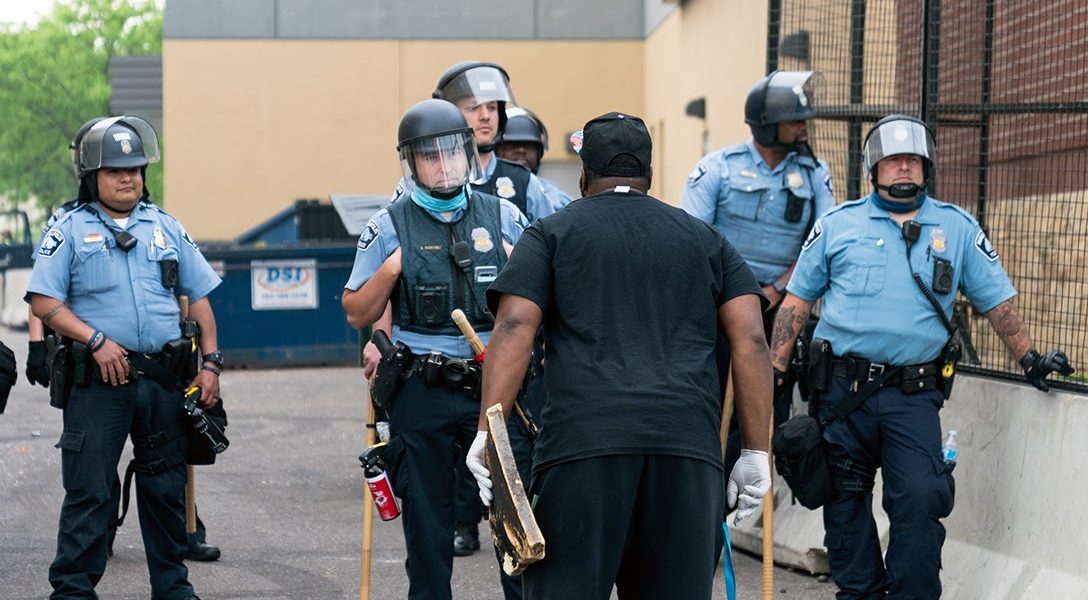 Minneapolis police officers engage with a protester outside the 3rd Police Precinct on May 28, 2020. The Minneapolis Police Union has called for officers to act as poll watchers. Photo credit: Lorie Shaull / Flickr (CC BY-SA 2.0)
Elections

As if tensions weren’t high enough, the Minneapolis police union is now recruiting retired cops to work as “poll challengers” in so-called “problem” areas on Election Day, a move that has set off alarm bells among Minnesota state and local elected officials.

The Minneapolis Police Federation, which supports the reelection of President Trump,

issued its call in response to a request from William Willingham, an attorney who identified himself as a senior legal advisor and director of Election Day operations for the Trump campaign.

“Poll Challengers do not ‘stop’ people, per se, but act as our eyes and ears in the field and call our hotline to document fraud,” according to Willingham. “We don’t necessarily want our Poll Challengers to look intimidating, they cannot carry a weapon in the polls due to state law. … We just want people who won’t be afraid in rough neighborhoods or intimidating situations.”

But Minnesota does not allow independent poll watchers in or near polling places. Each major party designates one challenger per precinct and both parties have already recruited their poll watchers.

“Targeting a voter for a challenge based on being in a so-called ‘problem area’ is unlawful and will not be permitted in Minnesota’s polling places,” tweeted Simon, the state’s chief elections officer.

Minneapolis Mayor Jacob Frey and Police Chief Medaria Arradondo also took issue with the union’s message, as did City Council member Jeremiah Ellison, who said the language in the email from union leader Bob Kroll was “incredibly inappropriate” and seemed to suggest an effort to discourage voting in disenfranchised neighborhoods. A protester holds a sign declaring that Minneapolis Police Union leader Bob “KKKroll Must Go! You About to Lose,” at a Solidarity Rally for Justice in Minneapolis, MN, on June 12, 2020. Kroll recently called for officers to act as poll watchers. Photo credit: Lorie Shaull / Flickr (CC BY-SA 2.0)

“To the extent that Bob Kroll wants to participate in a voter intimidation campaign, the city will take that very seriously,” said Ellison, whose ward covers parts of the ethnically diverse North Side. “There’s the clear dog whistle of ‘rough area,’ and we need people who aren’t ‘easily intimidated,’ and people who aren’t scared. There’s sort of innuendo and suggestive language, and again it avoids coming right out and saying what it seems to want to say.”

Kroll is a vocal Trump supporter and appeared last month at a “Cops for Trump” event with Vice President Mike Pence in Minneapolis.

The case was brought by the state chapter of the Council on American-Islamic Relations (CAIR) and the League of Women Voters of Minnesota. The injunction ordered Atlas Aegis to provide the organizations with all available names, telephone numbers, email addresses, and mailing addresses of 10 John Does named alongside company chairman Anthony Caudle in the lawsuit.

The John Does were described in the lawsuit as:

Atlas Aegis previously agreed to a cease and desist order issued by the state attorney general. But the federal suit was filed because CAIR and the League of Women Voters feared that agreement wasn’t strong enough. Their request for the injunction stated, “The image of armed vigilantes at polling stations is particularly traumatic for people who have recently immigrated.”

With all the focus on Election Day, it’s important to note that Minnesota has already shattered records for absentee voting. As of the Friday before the election, some 1.58 million absentee ballots had been accepted so far, nearly two and a half times the total number accepted four years ago. In Hennepin County, home to Minneapolis, more than 455,500 absentee ballots had been accepted with four days to go.

The numbers are important to watch because the 8th US Circuit Court of Appeals ruled October 29 that Minnesota’s absentee ballots must be in by 8 p.m. Election Day to be counted. The court said the secretary of state’s office did not show it was entitled to give voters a seven-day extension to turn in their ballots amid the COVID-19 pandemic.

“However well-intentioned and appropriate from a policy perspective in the context of a pandemic during a presidential election, it is not the province of a state executive official to re-write the state’s election code, at least as it pertains to selection of presidential electors,” the court ruled.

“The consequences of this order are not lost on us,” the court’s opinion said. “We acknowledge and understand the concerns over voter confusion, election administration issues, and public confidence in the election. … With that said, we conclude the challenges that will stem from this ruling are preferable to a postelection scenario where mail-in votes, received after the statutory deadline, are either intermingled with ballots received on time or invalidated without prior warning.”

Minnesota had granted a seven-day extension for receiving absentee ballots — as long as they were postmarked by November 3. But Republicans sued, asserting that they would challenge ballots that came in later than Election Day.

After the decision, Sen. Amy Klobuchar (D) tweeted a message telling voters to stop mailing in their ballots. “Because of LAST MINUTE ruling, Minnesota DO NOT put ballots in mail any more,” Klobuchar tweeted. “In the middle of a pandemic, the Republican Party is doing everything to make it hard for you to vote. Stand up for YOUR rights: Vote in-person or take mail-in ballot directly to ballot box.”