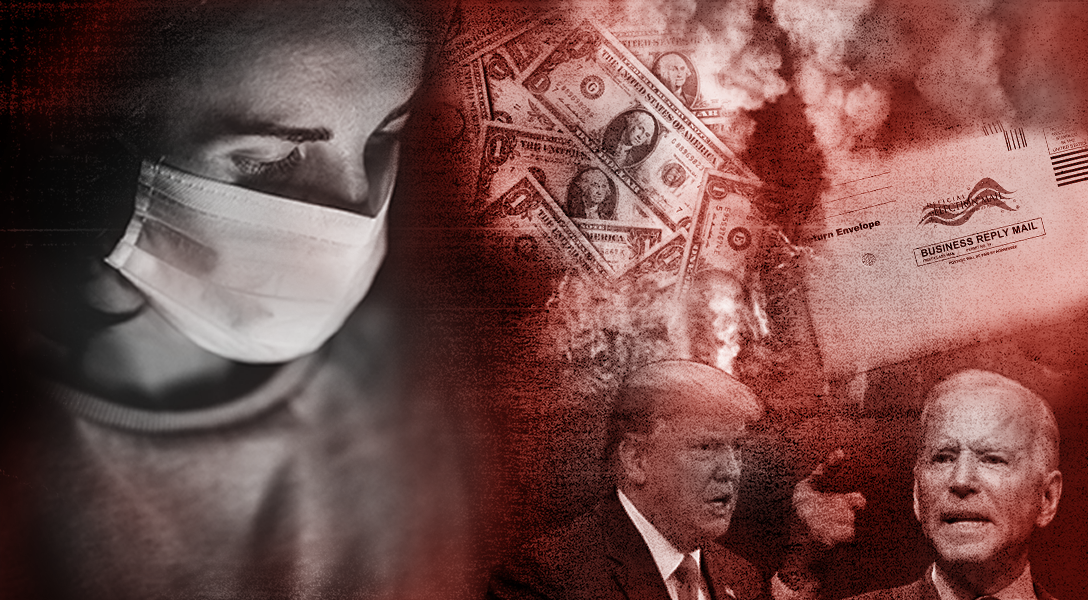 The Romans had a term for 2020: Annus Horribilis  —  Horrible Year. In many respects, as one catastrophe after another sucked us in, the description fits perfectly. But perhaps the awfulness of 2020 is best captured in a newer phrase —  it was a black hole of a year, with challenges so overpowering that the flood of obituaries for iconic celebrities often flashed by in a blur.

In early December, the COVID-19 pandemic began killing as many people on a daily basis as the 9/11 attack on the World Trade Center. What some tried to dismiss as little more than a bad case of the flu had resulted in the deaths of as many Americans in the first few months of the year as died in the Vietnam War over 10 years.

By the end of the year, the death toll exceeded the total of Americans who died during all of World War II. Worse, COVID-19 continued to spread exponentially, seemingly out of control. And the danger was not only from the virus itself. As emergency rooms and intensive care units filled up with COVID-19 patients, hospitals began literally turning away ambulances bearing people injured in accidents or suffering from unassociated medical problems.

Other victims of the virus included millions of Americans who were thrown out of work, with many threatened by eviction once temporary emergency measures were exhausted. Overworked medical staff faced exhaustion. The biggest COVID-19 problem turned out not to be a shortage of available respirators, but finding enough medical staff to run them.

The pandemic also led to a sudden surge in Americans buying firearms, which was linked to a surge in the murder rate, which increased 15 percent across the country. In America’s leading 51 cities, murders increased by an average of 36 percent. In Philadelphia, where I live, more than 500 people have been murdered and another 2,000 shot since the beginning of the year.

If that was not bad enough, other disasters stalked the country. Environmental damage, most likely from climate change, ravaged many of the Western states. In California, nearly 10,000 wildfires destroyed more than 4.3 million acres, roughly 4 percent of the state’s territory. At least 10,488 buildings were destroyed. The cost was estimated at more than $2 billion. And that was only California. In November, Wired predicted that if nothing is done to cope with climate change, the entire Western slope of the Sierra Nevada could ignite over the next decade in the greatest firestorm ever witnessed by the human race. While fire attacked the West, the Caribbean and Southeast US were hit with torrential storms, registering an unprecedented 30 hurricanes. Tornadoes were spotted as far north as Philadelphia.

On the social front, police homicides resulting in the deaths of George Floyd, Breonna Taylor, Rayshard Brooks, and numerous others unleashed nationwide protests and fueled the growth of the amorphous Black Lives Matter movement, which inspired demonstrations by an estimated 15 million to 26 million Americans — many of them white. Rioting that accompanied some of the demonstrations led to more than a billion dollars in damage.

The ringmaster and master of ceremonies for most of the year’s series of unprecedented debacles was Donald Trump, aided and abetted by a band of aging Republican conservatives who argued that the best government is the least government possible. Their premise may have been best expressed by corporate lobbyist Grover Norquist, who famously said, “I don’t want to abolish government. I simply want to reduce it to the size where I can drag it into the bathroom and drown it in the bathtub.”

Trump, a political shape-shifter, had begun his career in politics as a New York Democrat, only to redefine himself as a Republican conservative before herding the bulk of the GOP into mindless populism.

Among his other accomplishments, Trump did his best to dismantle the Environmental Protection Agency, despite the fact that the Western part of the country was incinerating itself. His administration’s most costly mistake may have been the decision to dismantle the White House task force responsible for planning a strategy to deal with major epidemics. As the coronavirus pandemic spread exponentially across America, it caught the country grievously unprepared. Trump quickly tossed the problem, like a hot potato, to the state governors, then did his best to skimp on federal funding to the states.

The result, not surprisingly, has been chaos, pandemonium, and threatened bankruptcy of the states which, forced to compete with each other, ran up prices for ventilators and protective equipment to record highs in a no-holds-barred, life-and-death contest for resources.

In between bouts of golf at his resorts, Trump insisted that no one could have predicted or prevented the pandemic. In fact, David Quammen had remarked in his 2012 book, Spillover: Animal Infections and the Next Human Pandemic, that scientists who had coped desperately with deadly SARS and MERS epidemics were anxiously waiting for “The Next Big One.” Trump, who doesn’t read books, responded by advising his followers to ignore science, at one point suggesting that they might inject bleach in their veins.

In Trump’s roller coaster of an administration, it has been relatively easy to quickly forget or simply overlook some of his most egregiously corrosive mistakes, the spread of one conspiracy theory after another, the incitement to ethnic tensions, his dabbling on the periphery of racism and support of white supremacists, the alienation of America’s allies, the attacks against immigrants and the forced separation of families into outsourced, make-shift concentration camps, the squandering of resources on a pointless wall in the desert, the launch of a useless and damaging trade war with China — the list is so endless that the public quickly tires of even thinking about it.

In the end, Trump’s greatest abomination, however, may have been his all-out assault against democracy and the American system of government, and his refusal to admit that the American public voted him out of office. Having lost by at least seven million votes, Trump made a hopelessly doomed effort to disenfranchise the alienated key swing states that rejected him.

Before the election, Trump clearly hoped that the COVID-19 pandemic would frighten voters away from the polls and into accepting the status quo for another four years. He campaigned against voting by mail, even though he himself voted by mail, hoping that the coronavirus would make people too frightened to vote in person.

To sabotage voting by absentee ballot, he had his hand-picked postmaster general sabotage the US mail service, removing mailboxes from districts likely to vote against him and decommissioning high-speed mail-sorting machines in strategic locations in important swing states. None of it worked. The US had the largest voter turnout in history.

After refusing to acknowledge defeat, Trump went on to lose more than 30 challenges in various courts. He then tried unsuccessfully to convince state legislators to disenfranchise the American electorate.

This final act of betrayal may, in fact, have given us all at least one reason to be proud. The American system, put in place by the Founding Fathers, was tested — and it survived the test, battered, maybe, but still largely intact. A crisis that forces a society to examine and reaffirm its values can in the end be a positive experience. As Nietzsche put it, “That which does not kill me, makes me stronger.” Disruption may be painful, but it can also clear the way for a fresh start. Nietzsche pointed out that societies occasionally need to go through a period of radical upheaval so that they can advance to the next level. Without the disruption, they simply repeat the same errors over and over again.

Although 2020 may have presented itself as an unending series of disasters, American society has indeed been moving forward — as counterintuitive as that may seem. The Black Lives Matter movement, which led to mass demonstrations last summer, was only possible because, in spite of the admonitions of Trump and white racists, a sizable part of the American public has finally begun to accept racial, ethnic, and gender diversity.

Equality was written into the law decades ago. The real problems we face today are due not to the law, but to the cultural leftovers that still remain from that period when at least part of the country based its economy, prejudices, and delusions about personal status on slavery. From redlining to geographically segregated, substandard schools, to slavery by incarceration and voter suppression, not to mention lethal force directed against Black people, the demonstrations were a reminder that America still has a good deal of moral housecleaning to do.

In the same vein, the police homicides pointed to more general policy changes that need to be made. The Economist reports that in contrast to other countries, the US has more than 18,000 individual law enforcement agencies, of which only 65 are federal. The US employs nearly 800,000 police officers. Policies and standards can vary widely from one police department to another and as a result, anything can happen.

From 2000 to 2014, at least 2,445 police officers were killed while on duty in the United States. During the same period precisely 25 police officers died on duty in Britain. The police across the United States normally shoot and kill an average of 1,000 citizens a year. Numerically, more white Americans are killed than Black Americans, but on a per capita basis, the police are twice as likely to shoot someone who is Black. The answer, as President-elect Joe Biden has repeatedly said, is not to defund the police, but to retrain them from tactics that rely too often on lethal force and to reorient them towards an emphasis on conflict de-escalation and social interaction.

The bottom line is that, if 2020 showed up the weak points in American society as well as our system of government, we have no reason to continue making the same mistakes. 2021 could and should be a year for renewal and refocusing. The one great success in 2020 was that more Americans voted than at any other time in history. For once, just about everyone was involved. The pandemic encouraged voting by mail, which in the end has shown itself to be a secure and accessible method that empowers the most Americans to express their true feelings. Voting by mail can be an effective way of ending voter suppression, and it is more secure since it provides a paper record of voters’ choices.

If 2020 proved anything, it is that we can no longer afford to ignore clear and present dangers, whether they involve climate change, inadequate health care, collapsing infrastructure, or failures in public education. Most of all, we cannot ignore the richness of American diversity. As Ben Franklin explained to the Founding Fathers, who were also divided when America declared Independence: Either we hang together, or we hang separately.