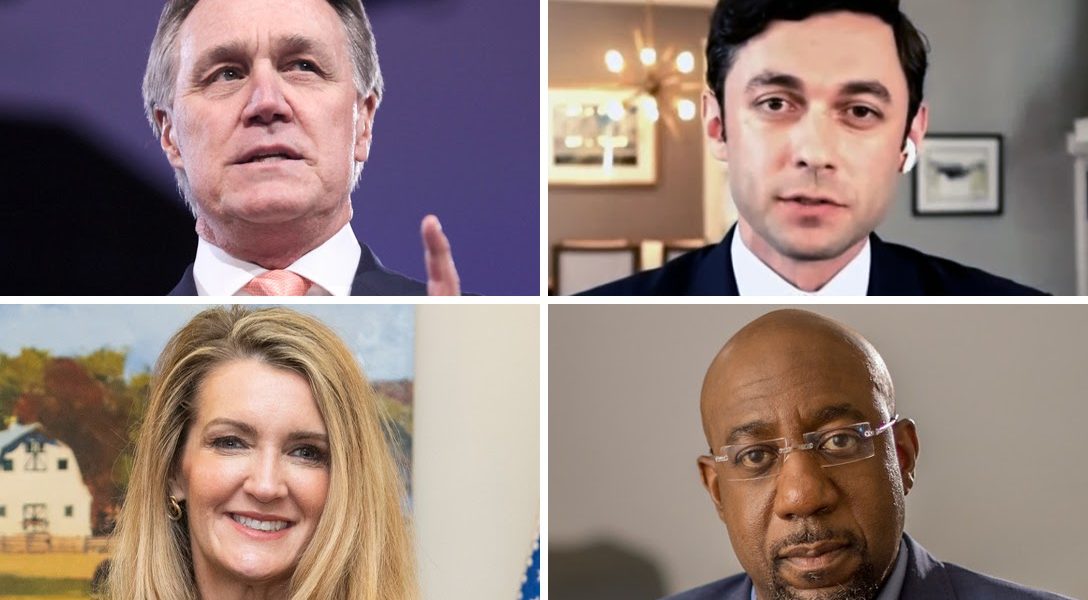 Fifteen days. That’s all the time there is between runoffs for two Senate seats in Georgia and Inauguration Day for Joe Biden.

Hanging in the balance: whether Biden can pursue a Democratic agenda, or whether Republicans can block everything from his Cabinet appointments to his policy initiatives. Talk about high stakes.

“I want to push back against this anachronistic notion that we can’t win in Georgia,” said Stacey Abrams, who, in the course of her narrow loss for governor two years ago, built the foundation for Biden’s narrow victory over Donald Trump. “We will have the investment and resources that have never followed a runoff in Georgia for Democrats,” she said Sunday on CNN.

By Monday she was Tweeting that her organization, Fair Fight, had already raised $6 million for the campaigns of Democratic challengers Jon Ossoff and Raphael Warnock. Still, that’s just a drop in the bucket of what’s to come before the January 5 runoffs. Democrats and Republicans are expected to spend at least $200 million on the two races, where runoffs are required because no candidate in either contest secured the 50 percent threshold required to win outright.

Warnock finished with 32.90 percent of the vote, while Republican incumbent Kelly Loeffler had 25.92 percent in a special election where seven other Democrats, five more Republicans, and six independents divided the rest of the vote. Loeffler, a wealthy Atlanta businesswoman, had been appointed to the position by Republican Gov. Brian Kemp after Republican Sen. Johnny Isakson stepped down last year due to health concerns.

Muddying the waters is the fact that Georgia is set to conduct a recount because the presidential race was so close. Biden finished with a narrow 12,651-vote lead over Trump in the preliminary count.

Also roiling Georgia is a new, bitter intraparty split that has developed between Loeffler and Perdue, and Republican Secretary of State Brad Raffensperger, who was in charge of conducting the election.

Siding with Trump, and perhaps trying to draw him into campaigning for them, Loeffler and Perdue claimed fraud and demanded that Raffensperger resign. They called the election an “embarrassment,” but Raffensperger derided their allegations as “laughable.” Steering a middle course was Republican Gov. Brian Kemp, who, when serving as Georgia’s secretary of state, presided over his own narrow victory over Abrams in 2018.

Lt. Gov. Geoff Duncan, also a Republican, said Monday his office has not seen any evidence of widespread voter fraud or irregularities. “We’ve not had any sort of credible incidents raised to our level yet,” he told CNN. “So we’ll continue to make sure that the opportunity to make sure every legal ballot is counted is there, but you know at this point, we’ve not seen any sort of credible examples.”

Democrats haven’t won a Senate race in Georgia in 20 years. But the state is changing rapidly. Georgia’s population has increased by some 2.7 million since 2000, and it has grown much more diverse.

Expect to see voting-rights groups mount a new push to register voters in the weeks to come. Georgians have until December 7 to register for the runoff election. Also expect to see a drive for voting by mail. Absentee ballots can start going out on November 18, and early in-person voting will run for three weeks, starting December 14. In the general election, 2.7 million voted in person, while 1.3 million ballots were mailed and accepted, according to the secretary of state’s office.

Above all, Georgians can expect to see plenty of campaign ads. Both Democratic candidates are already back on the air.

The contrast between Loeffler and Warnock could not be more pronounced. Warnock is the senior pastor of Ebenezer Baptist Church in Atlanta, where the Rev. Martin Luther King Jr. preached. If elected, Warnock would become Georgia’s first Black US Senator.

Warnock says he plans to continue to focus his campaign on messaging about health care, voting rights, criminal justice, and workers’ rights issues, while incorporating more ways to “draw a contrast between [his] record” and Loeffler’s. It’s an uphill fight, however, as no Democrat has ever won a statewide runoff in Georgia.

Democrats hope they will gain two more seats in the Senate for a 50-50 split, and then Vice President-elect Kamala Harris would be in position to cast tie-breaking votes in the chamber after she takes office.

She faced controversy in April after allegations that she made stock trades to isolate her and her husband’s assets from damage from the coronavirus pandemic after she and other senators received a private briefing on the virus. A federal investigation found no evidence of wrongdoing.

“We’re going to be successful, but we’ve got a long road ahead,” Loeffler said late Tuesday night. “So we’ve got to come together.”

The other Senate race also is a study in contrasts. Perdue is a businessman who has been very close to Trump during his time in office. Ossoff, on the other hand, began his career as an intern for Rep. John Lewis, the civil rights icon, who died over the summer and whose congressional district helped push Biden over the top in Georgia.

Voters can be sure that Perdue will make it sound like New York Senator Charles Schumer is the one on the ballot in January, especially since the Democratic minority leader proclaimed on Election Day, “Now we take Georgia, then we change the world.”

“It is clear that more Georgians believe that David Perdue’s positive vision for the future direction of our country is better than Chuck Schumer’s radical socialist agenda,” the Perdue campaign said.

Ossoff, meanwhile, will tie Perdue to Trump to turn out Democratic voters. “Georgians are going to send Jon to the Senate to defend their health care and put the interests of working families and small businesses ahead of corporate lobbyists,” the Ossoff campaign said. “Georgians are sick and tired of the endless failure, incompetence and corruption of Senator Perdue and Donald Trump.”

The current tally for the next Senate is 50 Republicans and 48 Democrats.  Democrats need to win the two Georgia seats to make it a 50-50 split, putting Vice President-elect Kamala Harris in position to cast tie-breaking votes in the chamber after she takes office.

Of course, none of the debate over the January runoffs means that the Trump campaign has actually given up on winning Georgia in the general election. The Trump campaign has announced that Rep. Doug Collins (R), who came in third behind Warnock and Loeffler in the Senate contest, will lead its recount team in the state. “Georgians deserve a free and open process, and they will get one,” Collins said.

Republicans have yet to provide any concrete evidence to back up their claims of fraud. Like other states, Georgia elections offices grappled with an unprecedented volume of mail-in ballots cast by those who opted out of voting in person on Election Day due to the coronavirus pandemic.

In Gwinnett County, Georgia’s second largest county located in metro Atlanta, there was a problem the day after the election that affected the counting of about 80,000 mail-in ballots, some of which could not be read by the county’s scanners, according to the Atlanta Journal-Constitution.

The problem was with the county’s batch scanner, which is used to rapidly scan large amounts of absentee ballots. Gwinnett County spokesperson Joe Sorenson said they would have to rescan the ballots and then manually review them to ensure an accurate count.

The issue in Gwinnett emerged hours after a different technology glitch halted voting Tuesday morning in Georgia’s Morgan and Spalding counties. And another key Georgia county — Fulton, which includes almost all of Atlanta — had to delay processing absentee ballots after a pipe burst.

Fulton County election workers rescanned provisional, military, and Uniformed and Overseas Citizens Absentee Voting Act ballots received Friday, as well as a small pool of others that had been received, but not scanned.

Abrams was confident it would not change the outcome. “Recounts in Georgia essentially mean a rescan of what’s been done very painstakingly over the last five days,” Abrams noted. “And we know that, whether it’s tomorrow or next week, the result will be the same … that Joe Biden has won the state of Georgia.”