Georgia and Florida Hit With New Lawsuits Over Voter Suppression

“We look forward to defeating another frivolous lawsuit,” Georgia Secretary of State Brad Raffensperger boasted this week, responding to the seventh legal challenge to the state’s sweeping new restrictions on voting. But he should keep that statement handy, as it looks like more suits are on the way.

The latest suit was filed this week by the nonprofit Coalition for Good Governance, which raises new issues relating to the law that was signed by Georgia’s governor in March.

“Liberty requires at least three essential things — an unfettered right to vote, freedom of speech, and the meaningful separation of powers,” the suit says. “This lawsuit is necessary to preserve individual constitutional rights, and constitutional government, against the attacks that SB202 makes on these three pillars of liberty.”

The lawsuits allege that the law’s new absentee voting identification requirements, restrictions on absentee drop boxes, ban on mobile polling places, criminalization of distributing food and drink to voters waiting on line, and expansions to ballot invalidation rules violate the 14th and 15th amendments and Section II of the Voting Rights Act.

Marks notes that what makes Georgia unique is voters’ inability to vote a secret ballot, and she says that Georgia is a national leader in instances of election identity theft.

Though it’s supportive of those suits,the Coalition for Good Governance stresses that it is challenging the law on different grounds.

The group has “a variety of claims that are not being addressed in the courts by the other six lawsuits filed in federal court,” said Executive Director Marilyn R. Marks. The 95-page bill “is so massive that no one, two, three, or six lawsuits can ever take all of the pieces down.”

In addition to the CGG’s traditional focus on election security, transparency, and oversight, their suit focuses on the Georgia State Election Board’s ability to “reach in and take over counties on a whim,” she said.

The lawsuit has 14 plaintiffs of differing partisan affiliations, resources, and sizes.

The use of large touchscreen voting machines at polling sites allow voters, election officials, and journalists to see how others are voting. “It is totally wrong. It is intimidating, it suppresses the vote, and it stifles people’s enthusiasm for coming to the polls,” Marks said. 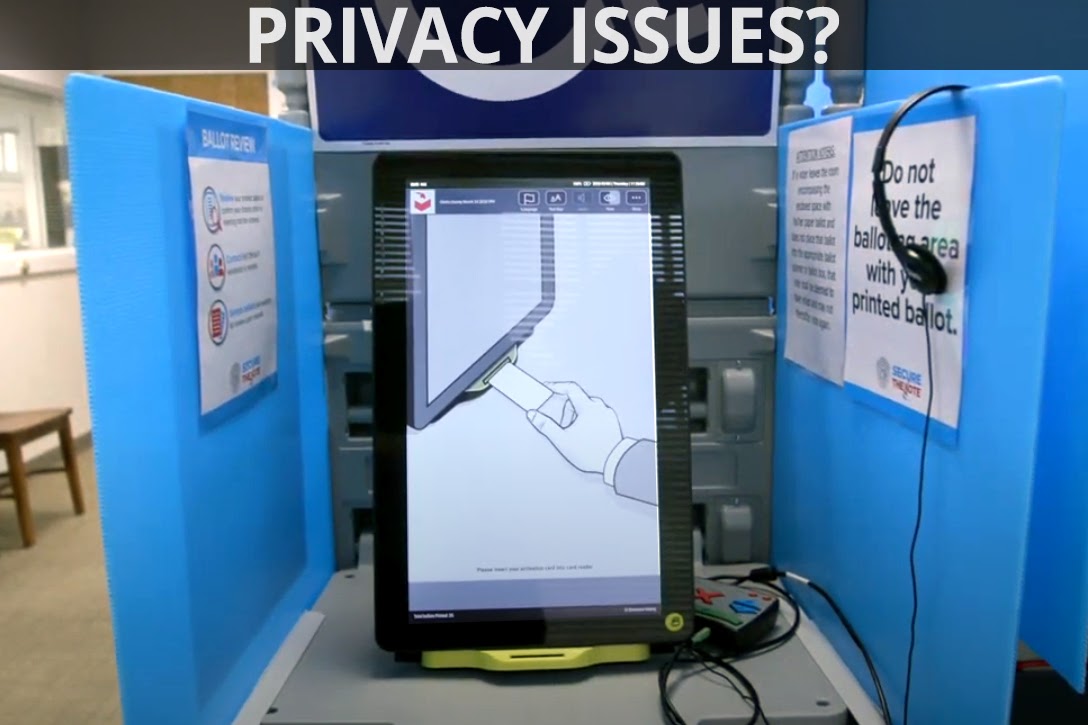 New Georgia touchscreens use large fonts and can be seen above the privacy guards. Georgia attorney Bruce Brown said it’s like “voting on a jumbotron.” Photo credit: Darlena Cunha / WhoWhatwhy

Under the new law, a person accused of seeing how someone else voted can now be charged with a felony, whether or not it was inadvertent. This provision intimidates voters and poll workers because of the inevitability of coming face to face with one of these “jumbotrons advertising everyone’s votes,” Marks said.

The law also compounds and exacerbates issues of voter privacy and intimidation by narrowing the window of time that voters can apply for a mail-in ballot and mandating that they provide sensitive personal information, including driver’s license number, birth date, and address, since taking away the signature requirement.

“I’ve talked to elderly voters who said, ‘I am afraid that my identity will be stolen. I don’t want to do this, but I can’t get to the polls. I don’t want to have to subject myself to that kind of identity theft,’” she said.

The Atlanta chapter of the Rainbow PUSH Coalition, a nonprofit organization that advances social justice and civil rights, is forming an alliance with other Georgia civil rights groups to file a lawsuit against the state’s new election law, according to attorney Robert Patillo, executive director for the organization’s Southern region.

Patillo is focused on the section of the law that gives the state Legislature control over the state election board by creating a new chair position. This position, previously held by the secretary of state, gives the Republican-controlled Legislature greater power and influence over election administration.

He argues these amendments are unconstitutional and make Georgia’s election system anti-democratic.

All Eyes on Georgia and Florida

Florida is also tamping down on mail-in voting and implementing other voting restrictions in the name of election integrity. They passed a restrictive voting law just last month. Several of the law’s provisions were taken directly from Georgia’s newest voting law.

With a combined 45 electoral college votes, Georgia’s and Florida’s political outcomes have consequences for the future of the country overall.

The Lawyer’s Committee is a nonprofit, nonpartisan civil rights organization that helps voters, particularly people of color, navigate the election process and provides legal protection and recourse to those excluded from participating.

In particular, the law undermines the forms of voting that Black Americans relied upon in the 2020 general election. While this group of voters has traditionally been less likely to vote by mail or use ballot drop boxes, in 2020, more Black voters used these voting methods than in 2016, outpacing white, Latinx, and Asian voters.

It’s no longer “about Bull Connor with a hose and dogs anymore. It’s about skimming off just enough votes to win elections in a way that’s anti-democratic and against the will of the people in the state of Georgia.”  — Attorney Robert Patillo, Rainbow PUSH Coalition

The new law also makes it harder to register to vote and harder to request a mail ballot, Snow says. Voters must now provide additional forms of photo identification, such as a driver’s license, state card, or social security number, to be eligible to participate in the first place.

Starting in 2022, those on the vote-by-mail list must reapply annually instead of every two years, which will effectively double the administrative costs for local elections.

The new law also prevents election officials from receiving grants to support their administrative work. SB 90 will effectively be an unfunded mandate that burdens election supervisors, said Snow, since the Florida state Legislature will not fund the associated costs of this bill.

The Florida Supervisors of Elections and other county election officials oppose SB 90. Within hours of Gov. Ron DeSantis (R) signing the bill into law on May 6, two lawsuits were filed against the Florida secretary of state, Laurel M. Lee.

Florida voted Trump in 2020, but Georgia’s Biden swing in the general election proved it is now considered a battleground state. Both states are caught in the middle of the partisan fight over voting rights.

A poll conducted by the University of Georgia School of Public and International Affairs finds that most Georgia voters support voter ID requirements for absentee balloting, mandating two Saturdays of early voting, and an optional two Sundays of early voting.

Though these provisions sound expansive, in practice, they have a disparate impact on Georgians’ access to voting.

The removal of Sunday voting options undermines initiatives encouraging churchgoers to vote, coined as “souls to the polls.”

The foundation is a nonprofit organization committed to youth development, voter accessibility, and democratic citizenship.

He believes measures to reduce early voting and remove Sunday voting are a direct attack on young people and communities of color’s voting rights.

Insofar as these provisions deliberately decrease the ease of voting for some groups, they are forms of voter suppression, Thorne said.

“This is Jim Crow in the 21st Century,” President Joe Biden wrote in a statement. “This law, like so many others being pursued by Republicans in statehouses across the country, is a blatant attack on the Constitution and good conscience.”

In response, Georgia Gov. Brian Kemp (R) accused Biden, his “left-wing” handlers, and the national media of not reading the bill and being “determined to destroy the sanctity and security of the ballot box.” He went on to affirm his efforts in the fight to safeguard Georgia elections against “power-hungry, partisan activists.”

To expand these issues across the country, Americans are divided when it comes to making voting accessible.

Eighty-five percent of Democrats and Democratic-leaning independents believe officials should do everything possible to make voting easier; only 28 percent of Republican-leaning voters share this perspective, according to a study by the Pew Research Center.

That same study shows that 82 percent of Democrats do not believe legislative changes making it easier to register to vote and cast ballots will hurt election security. Meanwhile, 63 percent of Republicans said that enhancing voting accessibility will undermine that security.

This study affirms the national trend, with the most restrictive voting bills being introduced in Republican-controlled state legislatures.

Which states are introducing the most bills in each category?

Patillo says that the character of voter suppression has changed.

“[SB 202] presents a new form of voter suppression, whereby the will of the people in the state of Georgia is substituted for the wishes of Donald Trump,” he said. “There are 159 counties in the state of Georgia. President Donald Trump lost by 12,000 votes. If you were able to stop just 100 people in each county, that’d be 15,900 votes — more than enough to get the votes that he needs.”

It’s no longer “about Bull Connor with a hose and dogs anymore,” he continued, “It’s about skimming off just enough votes to win elections in a way that’s anti-democratic and against the will of the people in the state of Georgia.”

Snow noted that the exclusion of people of color, and Black Americans in particular, is occurring in a handful of other states, including Arizona, Florida, and Texas.

As of 2020, Georgia’s population is roughly 32 percent Black or African American and 10 percent Hispanic or Latino.

Recent restrictive voting bills are “absolutely directed at disenfranchising communities of color, silencing their voices, and taking away their ability to hold politicians accountable at the ballot box,” Snow said.

How to Fight Back?

Marks and Patillo agree that the fight for democracy begins with the people, who must remain engaged and continue to demand change without becoming discouraged.

Patillo maintains that a federal response and ongoing oversight are necessary to curb the power of nefarious anti-voting groups at the state and local levels.

Rainbow PUSH Atlanta is advocating for the passage of the For the People Act, the John Lewis Voting Rights Advancement Act, and the Washington, D.C. Admission Act, and eliminating the filibuster.

“You want to have those [states’] laboratories of democracy in play. But at the same time, you need to have the general rules put in place by the federal government, so that we have guardrails to prevent things such as the Georgia voter suppression bill,” Patillo said.

Marks, by contrast, is unconvinced that the For the People Act can take care of the problems.

“There are some partially mitigating principles in that federal legislation. But even if it were to pass tomorrow, at the federal level, the massive dangers of SB 202 will still be there, most of them,” she said. “We’ve got to fight SB 202, on its own unconstitutional terms.”

She agrees that a combination of legal challenges and bipartisan state and federal legislative action is needed to overcome voter suppression.

“We’re talking to a lot of Republicans who are just now beginning to realize what they passed.  Some of them were kind of shocked, and saying, wait, we didn’t really mean to go quite so far on the takeover business,” Marks said.

She and her colleagues are hopeful that this public fight will create pressure and momentum leading Republicans to repeal provisions of the law even before challenges are heard by the courts.