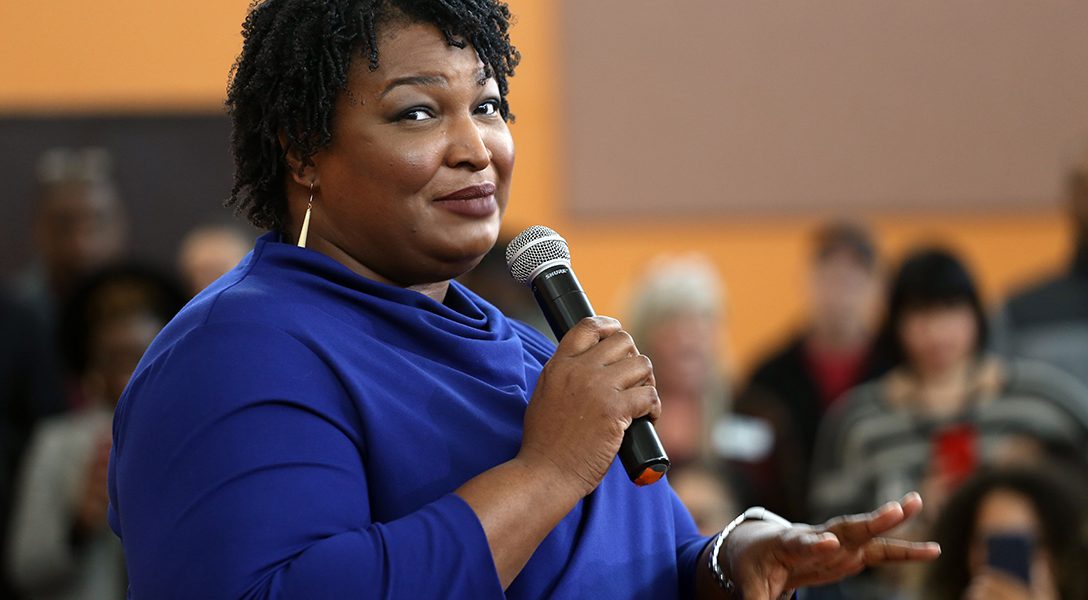 Stacey Abrams, whose unsuccessful campaign for governor highlighted voter suppression in Georgia, will announce her next election decision by the end of March. There is a lot of speculation about whether she’ll opt to run against incumbent Senator David Perdue (R-GA), or join the crowd seeking the Democratic nomination for president.

But it is another election that she is focused on right now. On March 19, the residents of Gwinnett County will be voting on a referendum to extend mass transit to this “most diverse” part of the state, Abrams said — noting that, in 2019, access to public transportation should be a given.

Another reason to pay attention: Gwinnett rejected scores of absentee ballots last November, a practice that was challenged in court. “My responsibility is … to talk about why that vote matters and to make sure it’s a fair fight,” she said.

Late last year, Abrams founded Fair Fight to address voting rights in Georgia. She’s been traveling the country to discuss the voter suppression that occurs in her state and across the country.

In Washington, DC, last week, she addressed a standing-room-only audience at The Brookings Institution. Brookings, one of the capital’s major think tanks, is a pretty button-down place, but Abrams brought out scores of high school and college students, who hung on to her every word and waited patiently to take pictures with her following her speech.

Abrams is using more than rhetoric to effect change in her own state. “We filed a mammoth lawsuit … a 64-page complaint, that yokes together all those pieces of voter suppression and says that as a system in the state of Georgia, the right to vote has been substantially harmed and that disenfranchisement is occurring at a level that violates the 14th [and] 15th amendments, the Voting Rights Act, HAVA (the Help America Vote Act), and the Georgia constitution. And it’s just wrong.”

She’s also working to change both state and federal laws. In Georgia, she noted, a bipartisan voting-rights caucus is working on state reforms.

“Voter suppression is the crisis of our time” – @staceyabrams https://t.co/6omoxTCnEW

To Abrams, voter suppression is attacking the essence of representative government. Voters who want policy change get those changes by selecting leaders who will implement them, she said. “The erosion of our democracy is not simply an authoritarian regime. It is actually using the laws as they exist to undermine the very lawmaking that we desire, and that we deserve. “

Seeking to strengthen voting rights in her state and across the country is the way she copes with her narrow electoral defeat, where she lost by a small margin.

Abrams said that her campaign fielded 50,000 phone calls from voters who faced hurdles at the polls. She spent ten days after the election in efforts to ensure that the votes of thousands of Georgians were counted.

Her campaign faced daunting odds. As secretary of state, Brian Kemp, the Republican nominee for governor, instituted an “exact match” policy, jeopardizing voters’ right to vote if the names on their voter registrations did not exactly match other legal documents like driver’s licenses. “53,000 voters were caught up in this bureaucratic nightmare, 90 percent of whom were people of color,” Abrams charged.

The state also imposed restrictions on “third-party” groups that go into communities and register voters. “That matters because the hardest to register communities are communities of color, newly registered citizens, and low-income communities,” Abrams said. “They require third parties to come to them because they often don’t know how to do it on their own.”

Since 2012, Georgia has closed 214 polling places. That is particularly tough on low-income voters, Abrams said, who may lack a car to drive to a precinct miles away.

And Kemp, she charged, retained voting machines that were vulnerable to hacking, turning down federal money intended to make them secure.

Last November, problems with voting equipment created long lines in some counties. African American voters faced waits as long as four hours, Abrams charged. For a “shift worker,” waiting in line means lost wages, she said, so some had to leave without voting.

Abrams resolved not to concede on election night largely because she wanted her campaign to be “a voice for people who had not been seen and heard in the body politic.”

After the election, her campaign went to court, and made “incremental progress,” getting more votes counted, and proving that the “voter suppression was real,” she said. Meanwhile, she charged, “the other side was destroying ballots and not following the law.”

By November 16, she said, she had to make a decision: whether to launch “a legal battle for myself” to see if she could still become governor, or to take on a “larger, more important battle … [to ensure] that this should not happen to anyone else.” She chose the latter.

“My campaign was not the only campaign that faced this challenge,” she said, noting that it was the “most public” one and the one that had the best narrative arc. “As a fiction writer” (Abrams has written eight romance novels), she appreciated what a perfect “villain” Secretary of State Brian Kemp made: “I mean, you’re the secretary of state declaring yourself the victor of an election you oversaw and you surprisingly won.“

“You [could] see the twirling mustache and a railroad track. And I was the first African American woman to ever have the opportunity and I came this close!” She pinched her fingers almost together. “I mean, it’s a great narrative if you like tragedies.”

“What was done in 2018, I am livid about it. I am sad,” she said, regretting the “good things we could be doing in the state” if Kemp had not “manipulated the power in his job” as secretary of state to become governor.

After the election, Kemp denied Abrams’s charges, saying that as secretary of state, he was merely following the law “to prevent elections from being stolen from anyone.”

She is proud of her strategy of trying to reach all voters, not just likely ones. She received more than 1.9 million votes, more than either Barack Obama or Hillary Clinton. And, she said, she earned a larger portion of the white vote than any Democrat had received in the past 20 years.

“I can’t prove that I would have won” if voter suppression had not occurred, she acknowledged, but she believes that she likely would have been elected governor. Kemp won by about 60,000 votes out of 3.9 million votes cast.

“What he did was entirely legal and wholly wrong,” she said. Lawsuits can get at some of the problem, “but remedies are limited.” The real answer is to elect candidates willing to change the laws, she said.

Abrams calls herself a partisan Democrat, and sees the battle over voting rights in stark terms. “The inflection point has been the demographic change in America,” she said.

“You have a new American majority that is largely comprised of people of color, millennials and gen Z, unmarried white women, and progressives across the country of good conscience regardless of race, who have all aligned themselves on the side of certain issues.”

Those on the “other side” feel the “urgency” of these demographic changes and are seeking to block progressive laws by “controlling who sets the policy,” she said. Voter suppression “is the most effective way” to block policy changes. “If you can never elect leaders who reflect your values, those values never gain traction in the public domain.”

What also helped voter suppression spread, she added, was the Supreme Court’s 2013 decision in Shelby County v. Holder. The decision freed states with a history of discrimination from getting approval from the US Department of Justice before changing voting procedures.

Abrams wants the conversation to stay focused on voter suppression. But it isn’t easy. Media accounts of her Brookings speech and her appearance the night before on NBC’s Late Night with Seth Meyers focused on her views on the 2020 race, whether she would run for the US Senate, and President Donald Trump’s decision to declare a national emergency to get the funds to build a border wall.

Responding to a question from WhoWhatWhy, Abrams said voting rights deserved far more attention. “We actually do need to talk about this all the time,” she said. “Every pundit. Every journalist. Every election. Every day. Because voter suppression doesn’t happen on election day alone.”