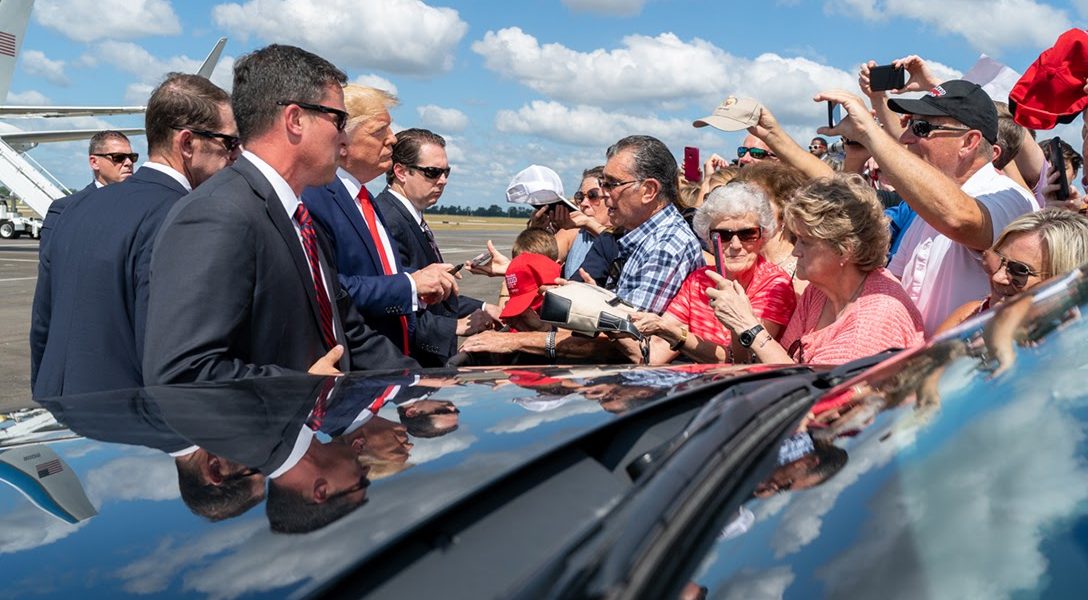 President Donald Trump shakes hands and poses for photos with supporters on October 3, 2019, upon his arrival to Ocala International Airport in Ocala, FL.
Elections

The battle over Ruth Bader Ginsburg’s successor on the Supreme Court is reverberating widely with Jewish voters, especially in battleground states like Florida, where even the smallest shift in voter enthusiasm can tip a presidential election’s outcome.

Florida state Rep. Joseph Geller, former chair of the Miami-Dade County Democratic Party, notes that Ginsburg was as much an icon of Florida’s Jewish community as of the feminist movement.

Added to that is the fact that Ginsburg was not only the first Jewish woman to sit on the Supreme Court, but she was also the first Jew to lie in state in the US Capitol.

With 657,095 Jewish residents, Florida has the third-highest Jewish population in the United States, surpassed only by New York and California. The vast majority live in South Florida, and most are highly active in politics. In the last presidential election, about 95 percent of Jewish voters in South Florida registered to vote, and nearly all of them actually voted, according to research conducted by Dr. Ira Sheskin, professor at the University of Miami. Sheskin said about 70 percent are registered Democrats, and about 25 to 30 percent are Republicans.

The prospect of shifting the Supreme Court to an overwhelmingly conservative bench has energized both Democrats and Republicans, but particularly Democrats (Jews tend to be liberal on social justice issues). “I think that the further tipping of the Supreme Court is a problem,” Sheskin said, “a significant problem for the Jewish population of Florida.”

Jack Cory, the founding partner of Public Affairs Consultants in Tallahassee, said his experience indicates that even Republican Jews in Florida are more moderate and progressive than the typical Republican Trump supporter. They are more likely to break away from the GOP when it comes to social issues, an area in which their views are similar to those of Democratic Jews, who worry that the nomination of Barrett, a devout Catholic, poses a risk to abortion rights and affordable health care, he said.

Polling conducted before Ginsburg’s death listed the Supreme Court as a major issue but far from the most important one for Jewish voters across the nation. A poll for the Jewish Electorate Institute, conducted in early September, listed the economy, health care, and the response to the COVID-19 pandemic as the top three issues for American Jews, followed by Medicare/Social Security and anti-Semitism. Nonetheless, 81 percent cited the Supreme Court as a “most important” or “very important” issue in the election. Sheskin agrees that health care issues, including the coronavirus, are major concerns for Florida’s Jewish voters. While the Supreme Court nomination is a relevant factor, it is likely to have a relatively small impact on their vote.

Florida writer and educator Sylvia Gurinsky was also skeptical about the impact of the Supreme Court controversy, given that Jewish voters are already highly motivated.

Gurinsky noted, however, that the fight over reproductive rights is important to Jewish voters. She said that it goes beyond the issue of abortion. “It also goes into such things as stem cell research,” she said. “I know Jewish groups such as Hadassah spent a lot of time back when there was a major battle going on over the issue of stem cells raising awareness of the stem cells and what it meant for medical research.”

Another major concern is that “the appointment is being rammed through” with an eye toward eliminating the Affordable Care Act and weakening voting rights, Gurinsky said. “And there’s also an issue, I think, of fairness,” Gurinsky added, noting that President Obama’s nominee Merrick Garland, who is Jewish, didn’t even get a Senate hearing.

Given the razor thin margins in Florida, with Joe Biden currently holding just a narrow lead overall in the state, even a tiny impact can be a significant one.

Ever since the infamous ballot-counting debacle in 2000, political experts have paid close attention to Florida, where even marginal shifts in voter preference could change the outcome of the presidential election. Trump won Florida by just a little over 1 percent four years ago.

“We jokingly refer to ourselves as a 1 percent state,” said Cory. But for this election, Cory believes that Florida will break from that reputation, in part due to the unprecedented private involvement in voter registration advertising this year.

Sheskin, meanwhile, posited that there really are two potential Supreme Court vacancies on this year’s ballot: not just Ginsburg’s seat, but that of Justice Stephen G. Breyer, who at 82 is the oldest current member of the Supreme Court. Like Ginsburg, Breyer is Jewish and is one of the liberal justices.

A final issue inseparable from the Supreme Court nomination and its impact on the Jewish vote is the possibility that this year’s election could end up before the high court.

“It’s a pretty chilling prospect to think,” Geller said, “that [the election] may be going back to a court that’s loaded up with appointees of the very person who’s going to be seeking their favor and election.”