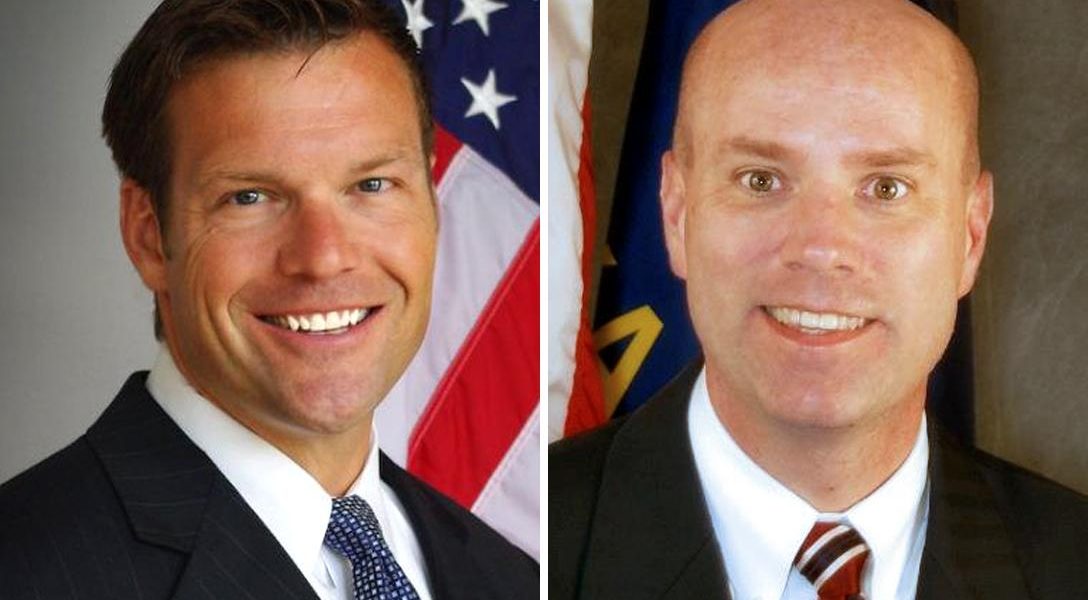 A top federal Election Assistance Commission (EAC) official is under fire for secretly communicating with a proponent of more restrictive voting laws.

In light of the revelation, the progressive advocacy group Allied Progress has asked for an investigation of the behavior of EAC Executive Director Brian Newby to determine if he violated agency policy by exchanging private emails with Kansas Secretary of State Kris Kobach — his former mentor who helped him get the job at the commission.

The EAC is a relatively obscure government agency established by the Help America Vote Act of 2002 that is tasked with improving voter access and certifying voting systems. But, critics say, recent changes to voting laws authorized by Newby in Kansas, Alabama and Georgia are doing the opposite by requiring applicants to present proof of citizenship on the federal voter registration form.

“These laws are designed to keep very specific people from exercising their rights to vote in our democracy,” Karl Frisch, executive director of Allied Progress, told WhoWhatWhy.

When Newby gave the three states his OK, then-EAC vice-chairman Thomas Hicks strongly criticized the action and said it “contradicts policy and precedent previously established by this Commission.” Hicks is currently the chairman of the EAC.

Emails obtained by the Associated Press cast a new light on Newby and his role as EAC executive director.

“I wanted you in the loop,” Newby emailed Kobach, “in part because of other issues in the past with the EAC. I also don’t want you thinking that you can’t count on me in an upcoming period that will tax our resources.”

Before becoming executive director, Newby had assured Kobach, “I think I would enter the job empowered to lead the way I want to.”

The emails raise the question of whether Kobach and Newby worked to use Newby’s position at the EAC to implement voting restrictions that the Kansas Secretary of State championed. Kobach has long fought for stricter voting regulations — ostensibly to prevent voter fraud.

At a minimum, Allied Progress wants the agency watchdog to investigate whether the contact between the two was improper. The group sent a letter to Patricia Layfield, inspector general of the EAC, on Thursday, asking her to open an investigation into Newby’s communications with Kobach and with the Secretaries of State in Alabama and Georgia. EAC officials are prohibited from privately communicating with those who have business before the commission.

EAC Director of Communications and Clearinghouse Brian Whitener said in an email to WhoWhatWhy that Newby is fully confident that his communications with Kobach were appropriate. In an interview with MSNBC earlier this year, Newby acknowledged that he had communicated with Kobach and the secretaries of state of Alabama and Georgia, but argued this was not a violation of commission policies.

Inspector General Layfield told WhoWhatWhy that she had received the letter of complaint from the advocacy group Allied Progress but would need time to look it over before deciding whether to open an investigation.

“I take all allegations seriously, and I’m just going to need time to consider what’s going on, to consider the content of the letter and what should be done,” she said.

WhoWhatWhy readers will be familiar with Kobach, who recently called the ACLU and League of Women Voters “communists” for challenging a proof-of-citizenship law that he pushed into law five years ago. Kobach later asked the EAC to change the federal mail-in voting registration form to reflect the law he pushed through, but his request was denied.

Kobach is also at the center of a lawsuit through which voting integrity activist Beth Clarkson had sought access to voting records in Kansas.

“Mr. Kobach, the ‘architect of voter ID and other restrictive voter registration laws,’ has been urging the EAC for years to make this change but was unsuccessful until Mr. Newby’s appointment as EAC executive director,” Frisch wrote in his letter to Layfield.

Newby worked under Kobach while serving as the county election commissioner in Johnson County, Kansas. In 2014, Kobach reappointed Newby for another four-year term, but Newby left his position to become the EAC executive director late last year.

During the swearing-in ceremony, Kobach called Newby a “superstar” who “has been a source of innovation and improvement in Kansas elections for the past decade.”

In a blog post, Newby praised Kobach as someone who “gets his fingernails dirty in the nuts and bolts of elections operations as though he truly is one of us.”