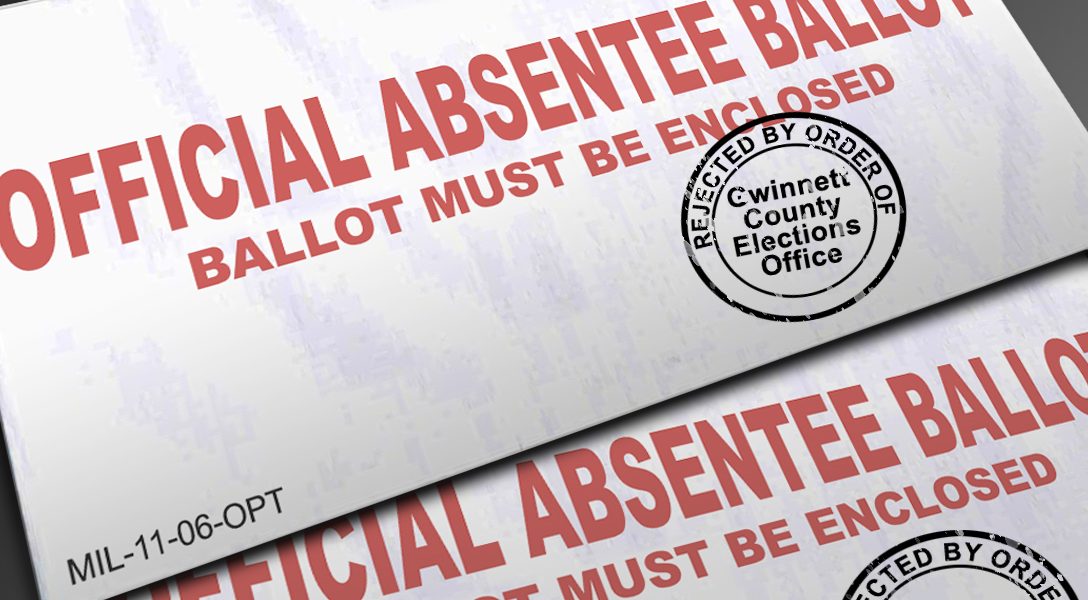 Pearlie Williams is an elderly black woman who lives in Gwinnett, Georgia’s most diverse county, both racially and economically. Like so many other African Americans who are excited about the possibility of making Democrat Stacey Abrams the first black female governor in US history — but are worried about the reliability of voting machines — she cast an absentee ballot this year.

Her ballot has been rejected — a fate she shares with many other people of color this year.

Worse yet, Williams had no idea that her vote had not been counted.

The daylight was fading when I arrived at her suburban home and knocked on the door. She was displeased when she cracked the door open to see who was outside — I had interrupted her cooking dinner.

Williams was skeptical of the young white man on her doorstep, but when I told her that her mail-in ballot was among the more than 10 percent of absentee ballots that the county is rejecting so far in this election, she changed her mind and settled against the doorframe. She kept the storm door closed, and we shouted through it.

“There’s been so many problems for so long, it’s like, why vote?” she said. “They’re going to do whatever they want to do anyway. And now you’re here telling me my ballot was rejected?”

The entire state has a chronic problem with rejecting mail-in ballots.

While many media outlets have written about the surge of absentee ballots submitted in Georgia this year, nobody has covered the high rate of rejection that disproportionately affects minorities.

Gwinnett County leads in rejecting mail-in ballots, with 398 turned away as of Thursday, according to numbers reported by the secretary of state’s office. Despite having only 12 percent of the state’s overall mail-in ballots, the county is responsible for 40 percent of statewide rejections so far. Ballots are rejected for small errors. For example, people often put the current date rather than their date of birth, as requested on the absentee envelope. And ballots are also rejected for subjective reasons: In hundreds of cases, a ballot is rejected because an election official thinks a signature does not match the one on the voter’s registration card.

Heavy White Thumb on the Scale

Following the revelation earlier this week that a disproportionate share of new voter registrations from African Americans have not been processed, Williams’s frustration is all too understandable.

And it certainly raises questions about whether the midterms in the Peach State — where Secretary of State Brian Kemp is locked in a tight race with Abrams — will be fair, or whether it will be the latest in a long list of elections in the Deep South in which white politicians put a thumb on the scale to disenfranchise African Americans.

[Editor’s Note: WhoWhatWhy has requested and paid for but not yet received Georgia’s voter file. The statistics referenced in this article were compiled using data provided by Michael McDonald at the University of Florida by matching the voter registration numbers in the absentee database from the secretary of state with the voter registration files of the secretary of state.]

‘I Don’t Have Any Answer’

The Gwinnett County elections office was unaware of the rejection rates when WhoWhatWhy initially sought comment on Tuesday. By the time of publication, the county spokesperson, Joe Sorenson, declined several requests for interviews with elections officials, saying that they were too busy and that they did not have a response to our questions.

“I don’t have any answer as to why the ballots are coming in incorrectly,” Sorenson said. “That’s something we can’t even speculate on.”

Gwinnett is a majority-minority county, where 62 percent of residents are nonwhite and one out of four residents are foreign-born. The county’s poverty rate is lower than the state’s average.

Gwinnett has revised its ballot since the last general election. It is the first county in Georgia to provide a bilingual mail-in ballot. Its Spanish-speaking population is now large enough that the county is required by the federal Voting Rights Act to provide voting forms, including instructions, in Spanish. The change in ballot layout, however, does not explain Gwinnett’s huge rejection rate. Further, Gwinnett’s high (10.7 percent) rejection rate for mail-in absentee ballots is not new. In the 2016 November elections, the county rejected 7.7 percent of mail-in ballots, and in 2014 it was as high as 16.7 percent for the general election. Given this persistently high rejection rate, it is unlikely the new ballots are the cause.

In the past, other counties also had unusually high rejection rates. In 2014, the typical county rejected almost 12 percent of its mail-in ballots. This year, Gwinnett is far outpacing the field. So far in this election, most counties have yet to reject a mail-in ballot, likely due to small volume so far. Still, the state’s average rate of rejection so far this election is at 1.9 percent, which is still incredibly high and could play a role in a tight election in which black voters are mailing in ballots at a much higher rate than they have in previous elections. White voters still use early voting at slightly higher rates than any other group.

Even a Few Votes Could Decide a Historic Election

In past statewide races, which weren’t particularly close and in which fewer people used absentee ballots, these rejections, while highly dubious, might not have made a difference. This year, however, even a few votes could decide a historic election.

The 2018 race for governor may be among the closest this state has seen. The most recent polls have Kemp up slightly, though neither candidate is currently projected to win over 50 percent of the vote. In Georgia, that means there would be a runoff election on December 4.

Disenfranchisement is a battle of small margins. Mail-in ballot rejections, voter roll purges, felony disenfranchisement, and exact-match voter registration laws are all forms of disenfranchisement that disproportionately affect minority voters and, combined, take the vote away from hundreds of thousands of Georgians.

If Voters Don’t Find Out Until It Is Too Late…

If a ballot is rejected, the voter still has an opportunity to vote. They are not removed from the voter registration rolls — if they find out about it.

Gwinnett County’s official policy is to use first-class mail to notify voters of a rejected ballot within three days of the decision. However, I talked to Williams nine days after her ballot was rejected and she had not been notified.

By state law, counties must notify voters if their ballots have been rejected — but the secretary of state’s office does not supervise or review ballot rejections at the county level.

In addition, if mail-in ballots are rejected closer to Election Day, it is unclear how voters could be notified and still have the chance to vote.

The bad news for her, though, is that Gwinnett is also far-and-away the leader in rejecting applications for absentee ballots. In Georgia’s system, you have to (1) apply for an absentee ballot, (2) get approved, (3) have your absentee ballot mailed to you, (4) fill it out, and (5) send it back, where (6) it too needs to be approved.

In a year of record-breaking numbers of absentee ballot applications, Gwinnett has turned away 324 of them, or 1.8 percent. That’s actually a little better than the county did in 2014, the most recent comparable election to this midterm and gubernatorial election cycle.

Williams was unsure whether she wants to go through the bother of trying again.

If Williams doesn’t want to go through all that back-and-forth, she can vote early in-person, where rejections are nearly nonexistent. In 2014, only four of almost 48,000 early voting ballots were rejected. Or she could go in on Election Day — and vote electronically.

These options only matter, though, if voters know their ballots have been rejected and if they have been notified in time to take action. People with hourly wage jobs need to plan their work schedules around voting, as they do not have the flexibility to show up to work late, take an extended break, or take the day off, which may be part of the draw for voting by mail-in ballot. Elderly or disabled voters may not have a way to get to the polls.

If Williams does make it to vote in-person, her problems as a voter are not solved. Voting machines in Georgia are not secure from potential hacking and they cannot be audited, unlike paper ballots.

There is not yet any explanation as to why Gwinnett’s numbers are so high.

A recent report commissioned by the Florida chapter of the ACLU took issue with a 1.01 percent rejection rate of mail-in ballots, especially since they disproportionately affected younger voters and minorities.

The same logic applies to Georgia.

Henry County, which has reviewed 1,057 mail-in ballots, has only rejected one. The county has two full-time staff dedicated to absentee ballots. Much of their time is spent helping voters fix small problems, Henry County elections director Tina Lunsford said.

Many of their voters are elderly or disabled, Lunsford said, which may lead to slight errors when reading the small print, or may result in a changed signature from the one on their voter registration. Her staff will contact the voter who can then come into the office and fix the problem.

Gwinnett County’s rejection rates look unusual to Michael McDonald, who runs the United States Elections Project and is an associate professor at the University of Florida. He is not yet convinced that the Gwinnett election officials are at fault. There could be an organizer providing bad information, for example, though that seems unlikely given that the rejected ballots are coming from all over the county — from racially diverse groups — and have been rejected for a half-dozen different reasons.

Before conclusions can be made, the rejected ballots themselves must be inspected, McDonald wrote in an email.

So far, 83 of the ballots Gwinnett has rejected are from disabled or elderly citizens; 40 of the people who had their mail-in ballots rejected in Gwinnett have been able to successfully submit a new ballot.

Jhaedyn Gibbs from Gwinnett County is on his fourth attempt to vote by mail. Two ballot applications were rejected: for a signature that did not match and for an address that was one number off, according to the county. One ballot was given an “Administrative Cancellation,” likely due to a mismatched address. His most recent ballot has not yet been reviewed by the county.

His example underscores the unnecessary complexity of the process. He is obviously not trying to commit in-person voter fraud and other counties — like Henry — have simple ways to deal with minor errors. So what’s the point of making hundreds of voters jump through administrative hoops again and again because a number is off by one digit or they misunderstood the instructions and put the incorrect date on their envelope?

Based on everything we have seen on the ground in Georgia, it is increasingly difficult to believe that the reason is anything other than to keep some people from voting.

Editor’s note: An earlier version of this article featured a graphic stating a ballot was “rejected by order of Brian Kemp.” The Secretary of State is not involved in individual ballot rejections. However, he was responsible for putting in place the policies on which the rejections are based.