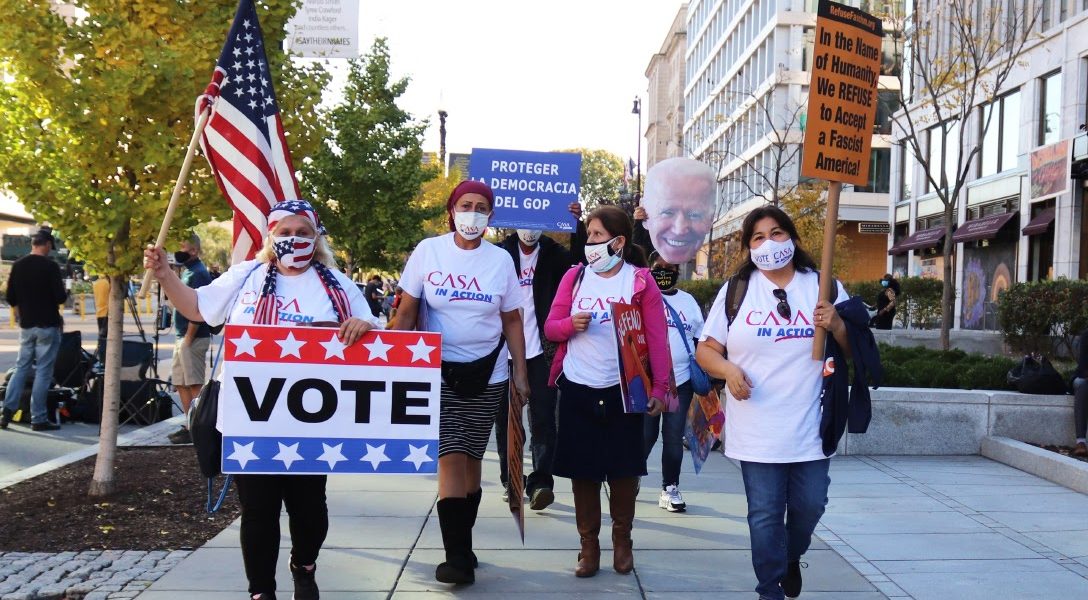 Indeed, turnout amid the Latinx population, especially in battleground states, has been higher than ever before. And yet headlines focused solely on the partisan voting patterns of the population abound: Why did Latinxs in Miami, a city in which they make up 70 percent, give Biden a slimmer win than they did Hillary Clinton in 2016? Why did 47 percent of Latinx voters in counties bordering Mexico in Texas’s Rio Grande Region vote for the man who set up inhumane detention camps in the area? Why did Trump — a president known for his abusive and inflammatory rhetoric towards immigrant communities — do better with Latinxs nationwide than he did in 2016, even after four years of attacking undocumented immigrants?

“Historically, we see this every election,” said Yadira Sanchez, co-executive director of Poder Latinx, an organization dedicated to increasing the political power and engagement of Latinx communities, immigrants, and other people of color in Georgia, Arizona, and Florida. “People want to know why [Latinxs] didn’t vote for the Democrat.”

This line of thinking follows a common pattern: Latinx communities are routinely ignored when it comes to crafting campaign policy, yet still expected to turn out for certain parties. When that turnout fails to materialize in exactly the way predicted, the Latinx population’s vote is analyzed, commodified, and taken apart in an attempt to understand what led to the discrepancy, or, what went “wrong.”

According to the Latinx organizers who directly engage with Latinx voters on the ground in key battleground states, such questions are problematic in their treatment of Latinx communities in the United States.

“Latinxs and people of color are always held to a different standard,” Sanchez said of what she sees as the tendency to pick apart the motives of Latinxs who vote against their best interest, in this case in support of Trump, but not that of white people who may be doing the same. “We know we’re held to different standards, so when we don’t respond the way candidates assume us to, they’re surprised and want to dig into this instead of asking why low-income white voters and white women voted for Trump.” Indeed, even though about seven out of every 10 Latinx voters cast their ballot for Biden, the narrative that the population somehow betrayed the Democratic Party remains pervasive.

On a November 10 episode of The Daily, the New York Times’s podcast, for example, journalist Nate Cohn stated, “We can safely say that Latino voters really went to Donald Trump.” This was said after the renowned paper’s own exit polls showed Trump with only 32 percent of the Latinx vote. The episode has since been corrected to “clarify [their] analysis of the Latino vote in the election.”

While the nebulous “Latinx vote” has long captured the attention of pollsters and campaigns alike, the actual Latinx electorate on the ground, organizers say, hardly receives the same treatment.

Oftentimes, political campaigns underinvest in these Latinx communities, if they invest in them at all, during election off-cycles. Rather than committing to working directly with Latinx communities on the issues that matter to them in the long-term, campaigns try instead to appeal to superficial conceptions of what Latinx communities prioritize. This leads to a political landscape that not only seeks to commodify and take for granted the Latinx vote, but that also ignores the complexities and nuances that underlie the purportedly monolithic population.

“Putting a sombrero on a pre-existing plan just because that’s what you want and then calling that outreach is not good enough for us,” said Stephen Nuño-Perez, a senior analyst for the Latinx-centered research firm Latino Decisions, of the surface-level ways in which political parties approach the Latinx electorate.

To counteract this, grassroots, Latinx-led organizations have long been working year-round in key areas to engage and motivate the Latinx vote.

In Pennsylvania, for example, the UCLA Latino Politics and Policy Initiative estimates that around 80 percent of Latinx voters voted for Biden, helping to propel the president-elect to win the battleground state and, consequently, the election. In addition, 300,000 more Latinx Pennsylvanians voted in 2020 than in the last presidential election. A large part of this surge in voters, however, is due not to the efforts of political parties or major campaigns, but to the work of grassroots organizations.

“It’s time for Democrats to fully invest in voters of color. … The Democrats must put more resources into developing the next generation of immigrants and multiracial organizers who can expand the electorate.”

“We are an unstoppable force, resilient in the face of constant attacks on our families, our jobs and our health,” said Thais Carrero, the Pennsylvania director for CASA in Action, a prominent Latinx organization working in the mid-Atlantic region, on the growing importance and political power of the Latinx electorate.

“But this didn’t happen overnight,” she added. “It’s been in the works for many, many years, not just during the 16 weeks of the election cycle.”

This type of sustained, responsible community organizing — many Latinx grassroots leaders said — is what is needed from major parties in order to truly empower and serve Latinx voters, rather than take them for granted.

Thomas Kennedy, the Florida coordinator for the immigrant-led youth network United We Dream, said of voter engagement, “We must strengthen civic participation and infrastructure that will not just reach out to voters in an election year, or that we’re making a case for them once a year that we’re fighting for the issues that directly impact their life and make our community a better place.”

Furthermore, this one-dimensional theorizing of the motives that make up the Latinx electorate undermines the groundbreaking successes that this election has brought in terms of Latinx engagement. According to Sanchez, the truly notable aspect of the election in terms of the Latinx vote was not only the massive increase in turnout, but also the massive surge of Latinas who took to the polls, especially in key states.

In Michigan, the Latinx early vote exploded by more than five times what it was in previous elections, and much of that was driven by Latinas. In fact, Latinas overperformed in all battleground states, casting more than 2.3 million votes early in these states and tripling their early vote totals from 2016.

In terms of the flawed conception of the Latinx vote as a monolith — a point of view that is just now starting to be challenged by mainstream campaigns and media — grassroots organizations find most success when they target and engage with specific communities within the greater Latinx population in specific ways that relate to their backgrounds and priorities.

Poder Latinx, for example, runs critically different campaigns in Central Florida than it does in Southern California. In Central Florida, where a bulk of the Latinx population hails from Puerto Rico, the organization makes use of the popular Puerto Rican web comic character, La Borinqueña, as a spokesperson to encourage people to go out to the polls. In California, on the other hand, where much of the Latinx population is of Mexican descent, Poder Latinx partnered with the vibrant Chicanx band, Las Cafeteras, to create music videos and digital art galleries empowering Mexican Americans in the region. In both of these cases, diversification of strategy proved wildly successful.

In terms of gender, too, the priorities of the Latinx population can vary — just as it does within other racial and ethnic groups. To account for this, Poder Latinx created their “Poderosas” (powerful women) initiative, in which they enlist Latina volunteers to talk to other Latinas about their priorities around voting, all while demystifying the electoral process. This, too, has proven successful in bringing out the Latina vote in the states where it was implemented.

“Republicans are making significant investments in outreach to the community in a very targeted and culturally competent way while forwarding a massive sophisticated effort of disinformation and suppression,” said Kennedy. “It’s time for Democrats to fully invest in voters of color. … The Democrats must put more resources into developing the next generation of immigrants and multiracial organizers who can expand the electorate.”

Of the importance of these grassroots organizations, Deputy Vice President Clarissa Martinez-de-Castro of the progressive organization UnidosUS concluded, “It is part of the work of these organizations, including many, many more that focus on new and low propensity voters [so that] the American electorate truly reflects our country [including] people who are so often left out of the traditional outreach strategies of political campaigns.”