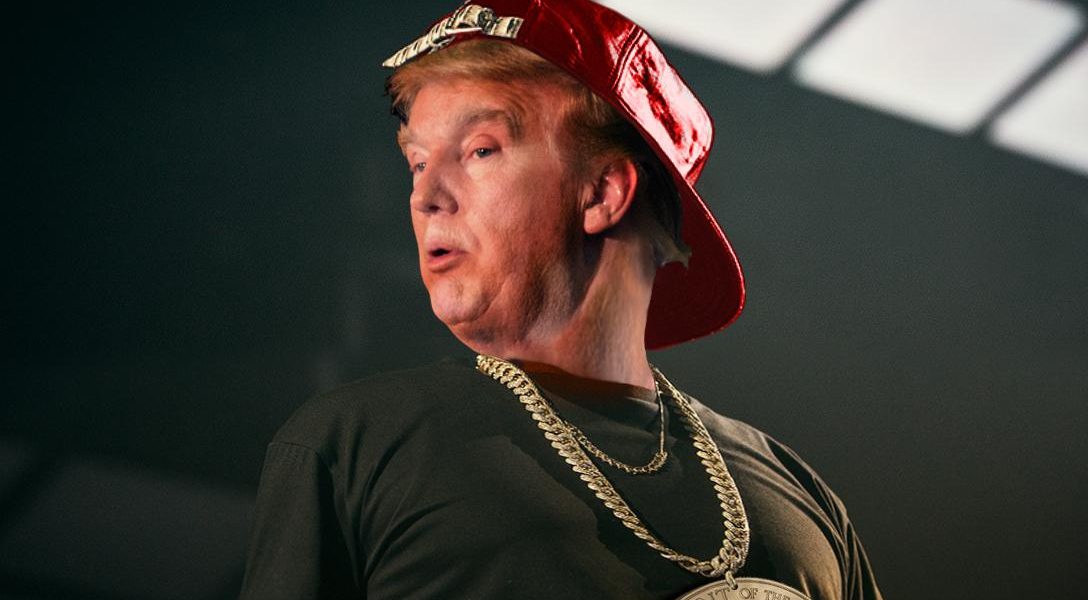 Following the revelation of the video in which Donald Trump described sexually assaulting women and getting away with it because he was famous, some of his supporters have invoked the “hip hop defense.” What Trump said, they argued, is no different from what you hear in a rap video.

While there is a big difference between rapping about sexual assault and, in effect, admitting to it, at the time the video was made, Trump actually was part of hip hop culture. Its bling and bad-ass nature appealed to him. He dug its materialism, objectification of women and arrogance. Like Trump, its black stars were larger than life.

There is a connection between the video and hip hop, as Kanye West’s producer, Mike Dean has remixed the comments into a rap song. So, would it be fair to call Trump the first hip hop candidate along the same lines as Bill Clinton was once referred to as America’s “first black president?”

Well, it’s complicated. When the video was made, that would have been an apt description; Trump was tight with many of the stars of the industry. However, they have turned away from Trump — just like the African-Americans and millennials who download their songs.

The world of hip hop may seem an unlikely nest for Trump.. A lot of people point to his 1973 housing racial-discrimination case, his call to reinstate the death penalty in New York State after five black men were falsely accused of raping a white women in Central Park (despite DNA evidence and their recent acquittal, Trump still claims they are guilty), or the fact that his father, Fred Trump, was arrested at a KKK riot in 1927 as proof that Trump was a racist back then. Still, he socialized and made friends with a number of black people before running for president.

Trump’s unlikely relationship with hip hop began in the late 90s, when he was making a comeback as both a celebrity and a businessman following a rough patch earlier in the decade. At the same time, hip hop music was peaking in popularity and massive record sales had turned black men like Sean “P Diddy” Combs (previously Puff Daddy), Russell Simmons and Andre Harrell into the type of celebrity businessmen that Trump was in the 80s — with big personalities and brands to match.

An article in Vibe magazine in 1999 about Trump’s attending Sean “P Diddy” Combs’s birthday party at the luxurious Cipriani restaurant painted Trump as the bridge between old white money and new hip-hop black money, in an era where P Diddy brought hip hop to the Hamptons.

At the party Trump was chummy enough with P Diddy to take the seat reserved for the mogul and rapper, anointing himself “The First Guest of the Birthday Party.”

Method Man returned the compliment, saying, “I like Trump’s style. It’s like ‘I’m rich, fuck y’all, I build my buildings and put my name on them. Fuck y’all.’” Writer Nelson George seconded Method Man’s endorsement:“Trump is respected by people in hip hop because he’s not a corporate guy, he’s a self-made entrepreneur, and that’s key to the hip hop mentality. They respect him for being a ‘fuck you’ hero.”

Hip hop publicist Jessica Rosenblum noted that it was hip hop that embraced Trump when he was spurned by white traditional businessmen: “He’s socially shunned by old money, but now hip hop is saying ‘hey you’re our own kind,’ and he’s saying ‘hey, cool.’” In Rosenblum’s eyes, Trump had a “ghetto pass.”

According to Trump, the hip-hop guys were not only “all great businessmen” but hip hop itself had done “more for race relations and respect among everyone than anything” and that “the most important white people have total respect for these [hip hop] guys.”

Trump was also tight with rapper 50 Cent, who called the mogul “a friend of mine” in a 2007 red carpet interview and complimented Trump’s “marketing” skills. In a 2008 interview Trump claimed that 50 Cent was “sort of a friend” and bragged about all the rappers who mentioned him in their songs. As recently as 2015, 50 Cent called Donald Trump “amazing” and declared that what linked them was their shared “personality flaws.”

It could be said that Trump has approached politics the way 50 Cent has approached rap music. 50 Cent made a name for himself by mocking and belittling fellow rapper Ja Rule, and has had feuds with several other rappers.

Trump adopted a similar style to go after his perceived enemies. His public battle with talk show host Rosie O’Donnell, whom he called a “real loser” and “nice fat little Rosie,” might be the best example. He also dismissed O’Donnell’s co-host on “The View,” referring to Elisabeth Hasselbeck as “one of the dumber people in television.”

Trump even feuded with white rapper Mac Miller, who made a song called “Donald Trump.” At first Trump was honored, saying “Donald Trump the song gets 16 million hits on YouTube. Who wouldn’t be flattered?”

But when he ran for president, Trump took things to another level.

In the Republican primary, he acted more like a battle rapper than a traditional politician, taking out his opponents with insults instead of critiques of their policies and views. He even insulted the looks of the lone female Republican presidential candidate, Carly Fiorina, saying: “Look at that face!”

In his battle against Ted Cruz in the primaries, Trump took another page from the playbook of his friend. Just like 50 Cent ridiculed and emasculated his rival Ja Rule by repeatedly calling him a “pussy,” Trump used the same term to mock Ted Cruz.

But maybe calling Trump a “hip-hop candidate” would be a disservice to hip hop. While the GOP nominee may in many ways emulate his hip-hop friends like 50 Cent and P Diddy, hip-hop culture as a whole is very diverse and includes a lot more than the braggadocious, feud-fueled, materialistic, macho attitudes, and misogyny that he represents.

Today many of Trump’s old hip-hop friends have turned against him. Russell Simmons wrote him an open letter, telling his “amazing friend” of “30-years plus” to “stop the bullshit,” and later called his old friend “the epitome of white supremacy.”

True, Sean “P Diddy” Combs has remained friends with Trump, remarking recently, “I always liked Donald’s style…Trump is a friend of mine, and he works very hard.” But he has not committed to voting for him. Rapper 50 Cent has taken to Instagram to pray that his old friend, Donald Trump, will not be president.

Snoop Dogg, who roasted Trump in 2011, has since insulted Trump: “We ain’t voting for you punk-ass, go get you a new hairdo, you bitch ass nigga” said while rapping over rapper YG’s song “Fuck Donald Trump.”

Maybe all of Trump’s old rapper friends dissing him disqualifies him from being a hip-hop candidate, or maybe it makes him more hip hop than ever.